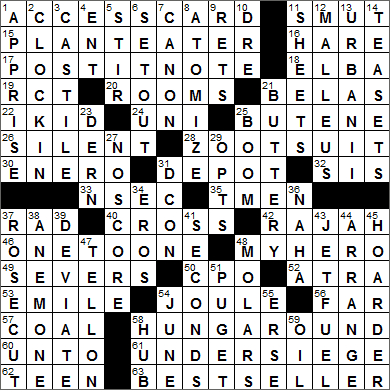 Today’s Wiki-est, Amazonian Googlies
Across
11. Censor’s target SMUT
“Smut” means “dirt, smudge” and more recently “pornographic material”. The term comes from the Yiddish “schmutz”, which is a slang word used in English for dirt, as in “dirt on one’s face”.

The original “censor” was an officer in ancient Rome who had responsibility for taking the census, and for supervising public morality.

16. Leveret’s dad HARE
Hares belong to the genus Lepus, and young hares, that are under one-year-old, are called leverets.

17. Reminder, often POST-IT NOTE
The Post-it note was invented at 3M following the accidental discovery of a low-tack, reusable adhesive. The actual intent of the development program was the discovery of a super-strong adhesive.

18. Largest island in the Tuscan Archipelago ELBA
I had a lovely two-week vacation in Tuscany once, including what was supposed to be a two-night stay on the island of Elba. I had envisioned Elba as a place full of history, and maybe it is, but it is also overrun with tourists who use it as a beach getaway. We left after one day and we won’t be going back again …

20. Quarters ROOMS
We use the term “quarters” for a place of abode, especially housing for military personnel. Back in the late 16th century, quarters were a portion (quarter) of a town reserved for a military force.

21. Olympics coach Karolyi et al. BELAS
Béla Károlyi is a gymnastics coach from Romania who has lived in the US since 1981. Károlyi has coached both the US and Romanian national teams, with both winning Olympic gold.

24. Corn lead-in UNI-
A unicorn is a mythical creature that resembles a horse with horn projecting from its forehead. The term “unicorn” comes from the Latin “uni-” (one) and “cornus” (horn).

25. Carbon compound found in crude oil BUTENE
Butene (different from “butane”) is also known as butylene. One of the major used of butylene is in the production of synthetic rubber.

28. Attire for filmdom’s The Mask ZOOT SUIT
A zoot suit has pants that are fairly loose fitting, except around the cuff at the bottom of the leg. The pants also have a high waist. The jacket of the suit has wide lapels and wide padded shoulders. Zoot suits were popular in the US in the thirties and forties, and were often associated with the African American, Latino American and Italian American ethnic groups. Over in the UK, the zoot suit was worn by the “Teddy boys” of the fifties and sixties. “Zoot” is probably just a slang iteration of the word “suit”.

“The Mask” is a 1994 film that is based on a comic book character. Jim Carrey plays the title role. Cameron Diaz also appears in the cast, making her film debut.

30. Month in el invierno ENERO
In Spanish, January (enero) is a month in the season of winter (invierno).

33. Tiny time div. NSEC
“Nanosecond” is more correctly abbreviated to “ns”, and really is a tiny amount of time: one billionth of a second.

35. Govt. collectors T-MEN
A T-man is a law-enforcement agent of the US Treasury (T is for Treasury).

40. Norwegian flag feature CROSS
The Norwegian flag consists of a blue cross with a white border on a red background. The vertical part of the cross is offset towards the hoist side of the flag. The cross is known as a Nordic or Scandinavian cross, and is found on the flags of all Nordic countries; e.g. Finland, Sweden and Iceland.

42. Indian bigwig RAJAH
“Raja” (also “rajah”) is word derived from Sanskrit that is used particularly in India for a monarch or princely ruler. The female form is “rani” (also “ranee”) and is used for a raja’s wife.

50. Naval NCO CPO
A Chief Petty Officer (CPO) is a non-commissioned officer (NCO) in the Navy and Coast Guard. The “Petty” is derived from the French word “petit” meaning “small”.

52. Big name in shaving ATRA
Fortunately for crossword setters, the Atra razor was introduced by Gillette in 1977. The Atra was sold as the Contour in some markets and its derivative products are still around today.

53. “The Girl Next Door” co-star Hirsch EMILE
Emile Hirsch is an actor from Topanga, California. Hirsch’s most famous role was the lead in the 2007 drama “Into the Wild”.

54. Work unit JOULE
James Joule was an English physicist who spent much of his life working in the family brewing business. Joule used his work in the brewery to study the relationship between heat and mechanical work. In honor of his achievements, his name is used for the unit of energy/work in the International System of Units (i.e. the joule).

61. Surrounded UNDER SIEGE
Our word “siege” comes from a 13th century word for a “seat”. The military usage derives from the concept of a besieging force “sitting down” outside a fortress until it falls.

Down
1. Inform APPRISE
Our verb “to apprise”, meaning “to inform”, comes from the French “apprendre”, which has the same meaning. The past participle of “apprendre” is “appris”.

3. Medieval Iberian kingdom CASTILE
The Kingdom of Castile was one seven medieval kingdoms of the Iberian Peninsula. The name comes from the large number of castles that were built across the kingdom.

4. Fictional giant ENT
Ents are those tree-like creatures that live in J. R. R. Tolkien’s Middle-earth in his series of books “The Lord of the Rings”. “Ent” is an Old English word for “giant”.

7. PowerShot maker CANON
The Japanese company called Canon is largely known in the US for producing quality cameras. The company started out as Precision Optical Industry Laboratory in 1937 making camera bodies. The name was changed in 1947 to Canon.

9. Soaks, as hemp RETS
Retting is soaking, a word commonly used to describe the soaking of fibrous plants such as flax in order to soften and separate the fibers.

Hemp is a hardy, fast-growing plant that has many uses mainly due to the strength of the fibers in the plant’s stalks. Hemp is used to make rope, paper and textiles. There is a variety of hemp that is grown to make drugs, most famously cannabis.

10. Beats Electronics co-founder DRE
Beats by Dre is a brand of audio products made by Beats Electronics, a company that was co-founded by rapper Dr. Dre. Apple bought Beats for $3 billion in 2014, the largest acquisition by far in the company’s history.

12. Hammer-shaped bone MALLEUS
The middle ear is the portion of the ear immediately behind the eardrum. The middle ear contains three small bones called the ossicles, the three smallest bones in the human body. The ossicles’ job is to transmit sound from the outer ear to the inner ear. The shape of the bones gives rise to their names: the hammer (malleus), anvil (incus) and stirrup (stapes).

21. Like shortbread BUTTERY
The type of biscuit/cookie known as “shortbread” originated in Scotland, and indeed some people say that Mary Queen of Scots had a lot to do with refining the recipe and popularizing the dessert. Walkers Shortbread is a well-known Scottish manufacturer of shortbread and related products, and is actually the largest exporter of food in the whole country.

23. “Blue Velvet” actress DERN
The actress Laura Dern is the daughter of the actors Bruce Dern and Diane Ladd. Among her many notable roles, Dern played the Florida Secretary of State Katherine Harris in the 2008 movie “Recount”, and Dr. Ellie Sattler in the 1993 blockbuster “Jurassic Park”.

“Blue Velvet” is a 1986 film written and directed by David Lynch. I’m not a big fan of David Lynch films …

25. Horizontal spar BOOM
On a sailboat, a boom is a spar that runs along the bottom of a sail.

31. Maker of the Ultra Set trap D-CON
“d-Con” is a line of rodent control products that has been around for over 50 years.

36. Okinawa’s capital NAHA
Naha is the capital city of Okinawa, the southernmost prefecture of Japan. Naha is located on Okinawa Island, the largest island in the prefecture.

37. Diamond buyer’s choice ROSE CUT
Diamonds that are “rose cut” are really seen these days, with most examples being found in antique jewelry.

38. Red flower created from the blood of Adonis ANEMONE
According to Ovid’s narrative poem “Metamorphoses”, the goddess Venus created the anemone plant by sprinkling nectar of the blood of her dead lover Adonis.

45. Compulsive subject of a former A&E series HOARDER
“Hoarders” is a documentary show on the A&E channel that tells the stories of real-life people who suffer from compulsive hoarding. The show ran for six seasons before being canceled in 2013.

51. __ Sound, part of the Salish Sea PUGET
George Vancouver was a British explorer, and an officer in the Royal Navy. As well as exploring the coast of Australia, he is best known for his travels along the northwest coast of North America. The city of Vancouver was named in his honor. Traveling with him on his American voyage was a lieutenant Peter Puget, and in his honor, Vancouver named the waters south of the Tacoma Narrows “Puget’s Sound”. Nowadays, the name Puget Sound describes an area much larger than Vancouver had envisioned.

The major bodies of water between the south-western tip of British Columbia and the north-western tip of Washington state are the Strait of Georgia, the Strait of Juan de Fuca, and Puget Sound. Since 1988, the whole network of coastal waterways in this area have been referred to as the Salish Sea. The term was coined by marine biologist Bert Webber who wanted to raise awareness of the need to manage the regions waters and ecosystems collectively.

59. Whale __ OIL
Whale oil is obtained from the blubber of whales, and is now largely a banned material given that most countries have outlawed whaling. One of the uses of whale oil here in the US was as a constituent of automatic transmission fluid.