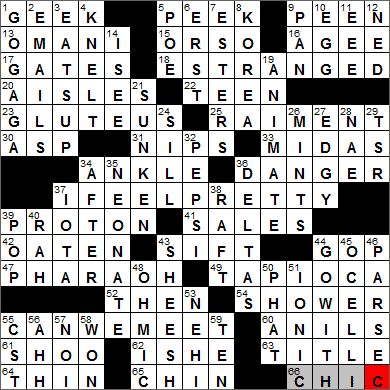 37A. “West Side Story” song, or a hoped-for response after experiencing the transition in this puzzle’s word ladder I FEEL PRETTY

Today’s Wiki-est, Amazonian Googlies
Across
1. Start of a word ladder GEEK
“Geek” is a good example of how our language evolves. The term is now relatively respectable and is used for a person who is technically competent (like the “Geek Squad” in Best Buy stores). “Geek” also implies some level of social ineptitude, to go along with the technical brilliance. A few decades ago, a geek was performer in a circus sideshow, someone who often engaged in bizarre acts like biting off the head of a chicken. Back in the 1800s a “geek” was simply a fool.

9. Word ladder, part 3 PEEN
The peen of a hammer is on the head, and is the side of the head that is opposite the striking surface. Often the peen is in the shape of a hemisphere (as in a ball-peen hammer), but usually it is shaped like a claw (mainly for removing nails).

13. Muscat native OMANI
Muscat is the capital of Oman,and lies on the northeast coast of the state on the Gulf of Oman, a branch of the Persian Gulf.

17. Tech giant GATES
Bill Gates is the former CEO of Microsoft, a company that he co-founded with Paul Allen. Gates has been listed as the wealthiest man in the world on several occasion over the past two decades. Ge now works full-time as co-chair of the Bill & Melinda Gates Foundation, alongside his wife Melinda. The Gates’ foundation is the largest transparently-operated charitable foundation in the world.

23. Buttocks muscle GLUTEUS
There are three gluteal muscles in the human body, the largest of which is the gluteus maximus. It’s the gluteus maximus which really dictates the shape and size of the human buttocks. In evolutionary terms, the human “glutes” are larger than those in related species because they play a big role maintaining our erect posture.

30. Deadly biter ASP
The asp is a venomous snake found in the Nile region of Africa. It is so venomous that the asp was used in ancient Egypt and Greece as a means of execution. Cleopatra observed such executions noting that the venom brought on sleepiness without any painful spasms. When the great queen opted to commit suicide, the asp was therefore her chosen method.

37. “West Side Story” song, or a hoped-for response after experiencing the transition in this puzzle’s word ladder I FEEL PRETTY
Leonard Bernstein’s musical “West Side Story” is of course based on William Shakespeare’s “Romeo and Juliet”. The musical is set in New York City and features two rival gangs: the Sharks from Puerto Rico and the Jets with working-class, Caucasian roots. Tony from the Jets falls in love with Maria from the Sharks. All this parallels Romeo from the House of Montague falling for Juliet from the House of Capulet in the Italian city of Verona.

39. Positive particle PROTON
A proton is a subatomic particle, with at least one found in the nucleus of every atom. A proton is not a “fundamental particle”, as it itself is made up of three quarks; two up quarks and one down quark.

44. Political initials since 1884 GOP
The Republican Party has had the nickname “Grand Old Party” since 1875. That said, the phrase was coined in the “Congressional Record” as “this gallant old party”. It was changed to “grand old party” in 1876 in an article in the “Cincinnati Commercial”.

47. Tut, e.g. PHARAOH
King Tut is a name commonly used for the Egyptian pharaoh Tutankhamen. Tutankhamen may not have been the most significant of the pharaohs historically, but he is the most famous today largely because of the discovery of his nearly intact tomb in 1922 by Howard Carter. Prior to this find, any Egyptian tombs uncovered by archaeologists had been ravaged by grave robbers. Tutankhamen’s magnificent burial mask is one of the most recognizable of all Egyptian artifacts.

49. Pudding starch TAPIOCA
The cassava plant is a woody shrub native to South America grown largely for its carbohydrate-rich tubers. In fact, the cassava is the third largest food source of carbohydrates (for humans) in the world. Ordinarily, that carbohydrate is extracted from the plant, dried as flour and is called tapioca.

54. Picnic downer SHOWER
Our term “picnic” comes from the French word that now has the same meaning, namely “pique-nique”. The original “pique-nique” was a fashionable pot-luck affair, and not necessarily held outdoors.

60. Blue dyes ANILS
Anil is another name for the indigo plant, as well as the name for the blue indigo dye that is obtained from it. The color of anil is relatively close to navy blue.

66. End of the word ladder CHIC
“Chic” is a French word meaning “stylish”.

Down
5. “The Gold-Bug” author POE
“The Gold-Bug” is a short story by Edgar Allan Poe, a mystery tale about a man who was bitten by a gold-colored bug. The story first appeared in three installments in the ”Philadelphia Dollar Newspaper” in 1843, and became very popular. He had submitted the story to a writing contest sponsored by the paper, and it was published as the winning entry. The grand prize also included $100 in cash, which was likely the largest sum that Poe ever received for a work in his lifetime.

7. Fragrant compounds ESTERS
Esters are very common chemicals. The smaller, low-molecular weight esters are usually pleasant smelling and are often found in perfumes. At the other end of the scale, the higher-molecular weight nitroglycerin is a nitrate ester and is very explosive, and polyester is a huge molecule and is a type of plastic. Fats and oils found in nature are fatty acid esters of glycerol.

8. North or South follower KOREA
Korea was occupied by the Japanese military from 1910 until Japan surrendered at the end of WWII in 1945. While the UN was working towards a trusteeship administration for Korea, the Soviet Union managed the Korean Peninsula north of the 38th parallel and the US managed the south. The UN’s plans came to nothing as the Cold War dictated the establishment of the two separate states of North Korea and South Korea. North Korea invaded the South in 1950, leading to the Korean War. After three years of fighting, the border between the two states became the demarcation line between the two military forces on the day the Armistice Agreement was signed. Tha line runs diagonally across the 38th parallel, and is better known as the Korean Demilitarized Zone (DMZ).

9. God of shepherds PAN
In Greek mythology, Pan was a lecherous god, one who fell in love with Echo the mountain nymph. Echo refused Pan’s advances so that he became very angry. Pan’s anger created a “panic” (a word derived from the name “Pan”) and a group of shepherds were driven to kill Echo.

12. “The Simpsons” character who says “Okily-dokily!” NED
Ned Flanders lives next door to Homer on TV’s “The Simpsons”. Ned is voiced by actor Harry Shearer and has been around since the very first episode aired in 1989.

24. Cat’s perch, perhaps SILL
A “sill plate” or simply “sill” is an architectural term for a bottom horizontal member to which vertical members are attached. A “window sill” is specific sill plate that is found at the bottom of a window opening.

28. Glaswegian’s negative NAE
A Glaswegian is someone from Glasgow, Scotland.

Glasgow is the largest city in Scotland and sits on the River Clyde. Back in the Victorian Era, Glasgow earned a reputation for excellence in shipbuilding and was known as “Second City of the British Empire”. Glasgow shipyards were the birthplaces of such famous vessels as the Lusitania, the Queen Mary and the Queen Elizabeth.

32. Brand originally named Brad’s Drink PEPSI
The Pepsi-Cola formulation was developed by one Caleb Bradham who made the drink at home and sold it as “Brad’s Drink”. Bradham’s aim was to provide a drink that was pleasant to taste, that would aid digestion and boost energy. Included in the formula were pepsin (a digestive enzyme) and kola nuts. These two ingredients inspired the brand name we use today: Pepsi-Cola.

36. Change symbols, in math DELTAS
Delta is the fourth letter of the Greek alphabet. We are most familiar with an upper-case delta and its distinctive triangular shape. The letter’s shape has influenced terms such as “deltoid muscle” and “river delta”. The upper-case delta is also used in mathematics and science to indicate a change in value.

45. Spots on a peacock train OCELLI
An ocellus (plural “ocelli”) is an eye-like marking, or eyespot. A good example of ocelli are the eyespots on the elaborate display feathers of a peacock.

46. Astronomical distance PARSEC
A parsec is a measure of length or distance used in astronomy. One parsec is equal to about 19.2 trillion miles.

48. Resistance-related OHMIC
The unit of electrical resistance is the ohm (with the symbol omega) named after German physicist Georg Simon Ohm. Ohm was the guy who established experimentally that the amount of current flowing through a circuit is directly proportional to the voltage applied, (V=IR) a relationship that every school kid knows as Ohm’s Law.

51. Corinthian cousin IONIC
The Ionic was one of the three classical orders of architecture, the others being the Doric and the Corinthian.

53. 90-year-old soft drink NEHI
The brand of Nehi cola has a name that sounds like “knee-high”, a measure of a small stature. Back in the mid-1900’s, the Chero-Cola company that owned the brand went for a slightly different twist on “knee-high” in advertising. The logo for Nehi was an image of a seated woman’s stockinged legs, with her skirt pulled up to her knees, to hint at “knee-high”.

56. Sound at a spa AHH!
The word “spa” migrated into English from Belgium, as Spa is the name of a municipality in the east of the country that is famous for its healing hot springs. The name “Spa” comes from the Walloon word “espa” meaning “spring, fountain”.