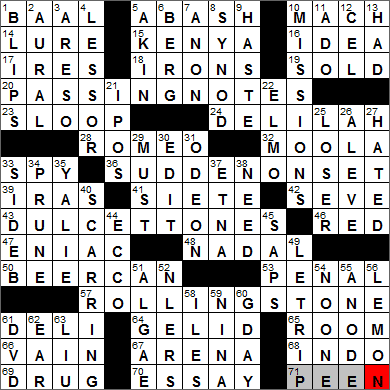 CROSSWORD SETTER: Jeff Stillman
THEME: Rolling Stone … each of the theme answers today is composed of two words, the second of which is an anagram of STONE:

20A. Reason for detention, perhaps PASSING NOTES
36A. Unexpected attack, as of dizziness SUDDEN ONSET
43A. Melodious sounds DULCET TONES

Today’s Wiki-est, Amazonian Googlies
Across
1. Canaanite god BA’AL
“Ba’al” can actually refer to any god and sometimes even human officials, as the word can also be used as an honorific title. Ba’al is sometimes known as Hada,and is a god of rain, thunder, agriculture and fertility.

10. Speed-of-sound ratio MACH
The Mach number of a moving object (like say an airplane) is it’s speed relative to the speed of sound. A plane travelling at Mach 2, for example, is moving at twice the speed of sound. The term “Mach” takes its name from the Austrian physicist Ernst Mach who published a groundbreaking paper in 1877 that even predicted the “sonic boom”.

14. Play the siren LURE
In Greek mythology, the Sirens were seductive bird-women who lured men to their deaths with their song. When Odysseus sailed closed to the island home of the Sirens he wanted to hear their voices, but in safety. He had his men plug their ears with beeswax and then ordered them to tie him to the mast and not to free him until they were safe. On hearing their song Odysseus begged to be let loose, but the sailors just tightened his bonds and and the whole crew sailed away unharmed.

15. Mombasa’s country KENYA
Mombasa is the second-largest city in Kenya (after the capital, Nairobi). Mombasa is located on the east coast of the country, on the Indian Ocean.

23. Fore-and-aft-rigged ship SLOOP
Sloops and cutters are sailboats, and each has just one mast. One major difference between the two types of vessel is that the mast on a cutter is set much further aft than the mast on a sloop.

24. Samson’s betrayer DELILAH
Delilah is a Biblical figure, the wife of Samson. Delilah was engaged by the Philistines to betray her husband by determining the secret of his great strength. Samson lied to his wife three times, but on the fourth asking he told his wife the truth, that he did not cut his hair. Delilah then convinced Samson to shear his locks and so allowed him to be captured by his enemies. Over the centuries, it has been usual to depict Delilah actually cutting off her husband’s hair, but the Bible actually says that she persuaded Samson to do the job himself.

28. “I am Fortune’s fool” speaker ROMEO
“O, I am Fortune’s fool” is a line from William Shakespeare’s play “Romeo and Juliet”. The words are uttered by Romeo after he kills Tybalt, Juliet’s cousin, in a duel. Romeo knows that he has made a bad mistake, and tells everyone so. Sure enough, things go downhill for him and Juliet for the remainder of the play.

41. Pedro’s lucky number? SIETE
“Siete” is the Spanish for “seven”.

42. Masters champ between Craig and Ben SEVE
Seve Ballesteros was a very entertaining golfer from Spain, once ranked as the world’s number one player. Sadly, Ballesteros died from brain cancer in 2011, at the age of 54.

43. Melodious sounds DULCET TONES
“Dulcet” means “pleasing to the ear” and is such a lovely word, I think. It comes from the Old French word “doucet”, a diminutive of “doux”,  which is the French for “sweet”.

46. Like Mars, apparently RED
The surface of the planet Mars has a very high iron oxide content, so Mars is red because it is rusty!

47. Pioneering computer ENIAC
The acronym ENIAC stands for Electronic Numerical Integrator and Calculator (although many folks insist that the C was for “Computer”). ENIAC was the first general-purpose electronic computer. It was designed to calculate artillery firing tables, but it ended up being used early on to make calculations necessary for the development of the hydrogen bomb. Given its uses, it’s not surprising to hear that development of ENIAC was funded by the US Army during WWII.

48. Tennis great with 11 Grand Slam singles titles NADAL
Rafael Nadal is a Spanish tennis player who is noted for his expertise on clay courts, earning him the nickname “The King of Clay”.

57. Publication since 1967, and a hint to the end of 20-, 36- and 43-Across ROLLING STONE
The iconic magazine “Rolling Stone” was founded in San Francisco in 1967. Jann Wenner was a cofounder, and is still the magazine’s chief editor. The name for the publication is taken from the 1950 song “Rollin’ Stone” recorded by Muddy Waters.

61. Where to find a hero DELI
The word “delicatessen” (or “deli” for short) came into English from the German “Delikatessen”. The Germans borrowed the word from French, in which language “délicatesse” means “delicious things (to eat)”. The terms ultimate root is “delicatus”, the Latin for “giving pleasure, delightful”.

“Hero” is another name for a submarine sandwich. The hero originated in New York City in the 1800s among Italian immigrants who wanted an Italian sandwich that reminded them of home. The name “hero” was coined in the 1930s, supposedly by a food critic in the “New York Herald Tribune” when he wrote that “one had to be a hero” to finish the gigantic sandwich. Hero is a prevalent term to this day in New York City, reserved for a submarine sandwich with an Italian flavor.

67. “Hunger Games” battle setting ARENA
“The Hunger Games” is a 2008 novel by Suzanne Collins, the first in a trilogy of titles that also includes “Catching Fire” (2009) and “Mockingjay” (2010). “The Hunger Games” was adapted into a very successful movie released in 2012.

68. Prefix with European INDO-
The Indo-European languages are a large group that includes most of the major languages of Europe, the Iranian plateau and South Asia. It is the largest grouping of languages in the world.

70. Lamb creation ESSAY
Charles Lamb published a famous collection of essays simply entitled “Essays of Elia”. Elia was actually a clerk and co-worker of Charles Lamb, whereas Lamb was the author.

71. Hammer part PEEN
The peen of a hammer is on the head, and is the side of the head that is opposite the striking surface. Often the peen is in the shape of a hemisphere (as in a Ball-peen hammer), but usually it is shaped like a claw (mainly for removing nails).

Down
7. Before thou know’st ANON
“Anon” originally meant “at once” and evolved into today’s meaning of “soon” apparently just because the word was misused over time.

8. Church council SYNOD
The word synod comes from the Greek word for assembly, or meeting. A synod is a church council, usually in the Christian faith.

12. Disney collectible CEL
In the world of animation, a cel is a transparent sheet on which objects and characters are drawn. In the first half of the 20th century the sheet was actually made of celluloid, giving the “cel” its name.

13. Hornswoggled HAD
“To hornswoggle” is to cheat, to deceive, to bamboozle.

21. NASDAQ debuts IPOS
An Initial Public Offering (IPO) is the very first offer of stock for sale by a company on the open market. In other words, an IPO marks the first time that a company is traded on a public exchange. Companies have an IPO to raise capital to expand (usually).

22. Saint with a fire ELMO
St. Elmo is the patron saint of sailors. He lends his name to the electrostatic weather phenomenon (often seen at sea) known as St. Elmo’s fire. The “fire” is actually a plasma discharge caused by air ionizing at the end of a pointed object (like the mast of a ship), something often observed during electrical storms.

30. Polish language EDIT
When one edits, one usually is polishing up language.

31. Ancient Greek theater ODEON
In Ancient Greece an odeon was like a small theater, with “odeon” literally meaning “building for musical competition”. Odea were used in both Greece and Rome for entertainments such as musical shows and poetry readings.

35. Singer in the Whiffenpoofs YALIE
The Yale Whiffenpoofs are an a cappella group based in Yale University. They are the oldest such university group in this country, established in 1909. “The Whiffenpoof Song” is the group’s traditional closing number. It was first performed back in 1909, and has been recorded by many artists including Rudy Vallee and Bing Crosby.

37. Italian peak ETNA
Mt. Etna is the largest of three active volcanoes in Italy. Mt Etna is about 2 1/2 times the height of its equally famous sister, Mt. Vesuvius.

38. Sine qua non NEED
“Sine qua non” is a Latin phrase that we use to mean “the essential element or condition”. The literal translation is “without which not”. One might say, for example, “a challenging crossword is the sine qua non of a good newspaper”. Well, crossword fans might say that anyway …

44. Danish shoe company ECCO
I have to say, after owning several pairs, ECCO shoes are the most comfortable in the world …

52. Phils, e.g. NLERS
Philadelphia’s baseball team was founded in 1883 as the Quakers, with the name changing to the Philadelphias and Phillies not long into the team’s history. The Phillies have been based in the same city using the same team name longer than any other team in US professional sports.

55. Positive pole, perhaps ANODE
The two terminals of a battery are called the anode and the cathode. Electrons travel from the anode to the cathode creating an electric current.

59. One of a historic seagoing trio NINA
As we all know, Christopher Columbus used three ships in his first voyage across the Atlantic: the Santa Maria, the Niña and the Pinta. The Pinta was the fastest of the three, and it was from the Pinta that the New World was first spotted, by a sailor on lookout called Rodrigo de Triana. Pinta was a nickname (as was Niña), meaning “the painted one”. The Pinta’s real name has been lost in mists of time.

The ship we know as the Niña was actually the nickname of a ship actually called the Santa Clara. The nickname “Niña” probably came from the name of her owner, Juan Niña of Moguer.

60. Howdy from Adelaide G’DAY
Adelaide is the capital city of the state of South Australia. Adelaide was named after Queen Adelaide, the wife of England’s King William IV.

61. Pirate’s booty? DVD
The pirating of DVD’s is a big problem …

“Booty”, meaning plunder or profit, is derived from the Old French word “butin” which has the same meaning.

63. C.W. Post is its largest campus LIU
Long Island University (LIU) is a private school that was chartered in 1926. LIU’s focus has always been on providing moderately-priced, effective education to people from all walks in life. To that end, LIU opened a second campus in 1951 in Brookville in the suburbs of New York City, recognizing the need to serve families that were living outside of the metropolis.

The largest location of Long Island University is named the C. W. Post Campus. The property on which the campus is built was sold to the university by Marjorie Merriweather Post. Three years later, LIU named the campus after Charles William Post, Marjorie’s father. C. W. Post made his large fortune in the breakfast cereal business.