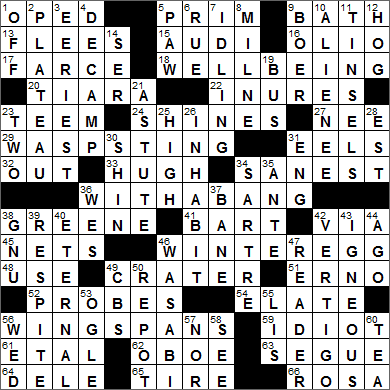 CROSSWORD SETTER: Jeff Stillman
THEME: Wingspans … each of today’s themed answers comprises the word WING with some letters inserted inside:

56A. Plane measures … and, literally, what can be seen in the answers to starred clues WINGSPANS

13. Skedaddles FLEES
“Skedaddle ” is a slang term meaning “run away” that dates back to the Civil War.

15. Four-ring-logo company AUDI
The predecessor to today’s Audi company was called Auto Union. Auto Union was formed with the merger of four individual entities: Audi, Horch, DKW and Wanderer. The Audi logo comprises four intersecting rings, each representing one of the four companies that merged.

16. Mélange OLIO
“Olio” is a term meaning a hodgepodge or a mixture, coming from the mixed stew of the same name. The stew in turn takes its name from the Spanish “olla”, the clay pot used for cooking.

“Mélange” is the French word for “mixture”.

17. Many a Wilde play FARCE
A “farce” is a comedy play that features an exaggerated and improbable storyline, with lots of physical humor. I love a good farce …

27. Miss identification NEE
“Née” is the French word for “born” when referring to a female. The male equivalent is “né”.

29. *It might require treatment with an EpiPen WASP STING
EpiPen is a brand name of epinephrine auto-injector. An EpiPen delivers a measured dose of epinephrine, usually for the treatment of an allergic reaction.

33. Wolverine portrayer Jackman HUGH
Australian actor Hugh Jackman is most famous perhaps for his recurring role as Wolverine in the “X-Men” series of films, but as I don’t really “do” superhero movies, I like him best from the romantic comedy “Kate & Leopold” and the epic “Australia”. More recently, Jackman has garnered praise for his portrayal of Jean Valjean in “Les Misérables”.

38. Novelist Graham GREENE
Graham Greene was a writer and playwright from England. Greene wrote some of my favorite novels, including “Brighton Rock”, “The End of the Affair”, “The Confidential Agent”, “The Third Man”, “The Quiet American” and “Our Man in Havana”. Greene’s books often feature espionage in exotic locales. Greene himself worked for MI6, the UK’s foreign intelligence agency. In fact, Greene’s MI6 supervisor was Kim Philby, the famed Soviet spy who penetrated high into British intelligence.

41. Homer’s son BART
Bart Simpson is the main character in television’s “The Simpsons”. Bart’s name was chosen by the writers as it is an anagram of “brat”. Bart is voiced by actress and comedian Nancy Cartwright.

46. *Fabergé item auctioned for $9.6 million in 2002 WINTER EGG
The Winter Egg is a Fabergé egg designed for Tsar Nicholas II so that he could present it to his mother as an Easter gift in 1913. The 1913 Winter Egg was the most expensive of the series of fifty-two jewelled Easter eggs that were fabricated for the Russian royal family. It was sold at auction in 2002 for just under ten million dollars, reportedly purchased by the Emir of Qatar.

51. Cubemaster Rubik ERNO
What was originally called the “Magic Cube” became better known as Rubik’s Cube, named for its inventor Ernő Rubik. Rubik’s Cube is the world’s biggest selling puzzle game, with over 350 million sold in just over 30 years.

59. Word before box or card IDIOT
“Idiot box” and “boob tube” are nicknames for television.

A “idot card” is a cue card, a card with notes that is used to help actors and speakers remember what to say.

62. Slender wind OBOE
The oboe is perhaps my favorite of the reed instruments. The name “oboe” comes from the French “hautbois” which means “high wood”. When you hear an orchestra tuning before a performance you’ll note (pun intended!) that the oboe starts off the process by playing an “A”. The rest of the musicians in turn tune to that oboe’s “A”.

63. Seamless transition SEGUE
A “segue” is a transition from one topic to the next. “Segue” is an Italian word that literally means “now follows”. It was first used in musical scores directing the performer to play into the next movement without a break.

64. Remove from a manuscript DELE
“Dele” is the editorial instruction to delete something from a document, and is often written in red.

65. Road runner TIRE
The original “tires” were iron plates that formed the rim of a wheel for a carriage. The term probably came from “attire”, with the idea being that “tires” were the dress or covering for the wheel. The original spelling was “tyre”, which is still used today on the other side of the Atlantic.

66. Parks on a bus ROSA
Rosa Parks was one of a few brave women in days gone by who refused to give up her seat on a bus to a white woman. It was the stand taken by Rosa Parks on December 1, 1955 that sparked the Montgomery, Alabama Bus Boycott. President Clinton presented Ms. Parks with the Presidential Medal of Freedom in 1996. When she died in 2005, Rosa Parks became the first ever woman to have her body lie in honor in the US Capitol Rotunda.

Down
1. Hiker’s spray brand OFF!
OFF! is an S. C. Johnson brand of insect repellent that uses DEET as the active ingredient.

DEET is short for N,N-Diethyl-meta-toluamide, an active ingredient in insect repellents. DEET is most often used to repel mosquitoes by applying it to the skin and/or clothing. It is also used to protect against tick bites.

Québec is the largest province in Canada, and the only one with French as its sole official language. The name “Québec” comes from an Algonquin word “kebec” meaning “where the river narrows”. This refers to the area around Quebec City where the St. Lawrence River narrows as it flows through a gap lined by steep cliffs.

9. Dutch South African BOER
“Boer” is the Dutch and Afrikaans word for “farmer”, a word that was used to describe the Dutch-speaking people who settled parts of South Africa during the 1700s.

10. Property recipient, in law ALIENEE
An alienee is one to whom ownership of property is transferred.

11. Adds holiday glitter to TINSELS
The custom of decorating trees at Christmas seems to have originated in Renaissance Germany. Those first trees were placed in guildhalls and were decorated with sweets and candy for the apprentices and children. After the Protestant Reformation, the Christmas tree became an alternative in Protestant homes for the Roman Catholic Christmas cribs. The Christmas tree tradition was imported into Britain by the royal family because of its German heritage. That tradition spread from Britain into North America.

19. Clear tables BUS
A busboy is a person who assists a waiter, mainly by clearing tables. The verb “to bus” arose in the early 1900s and is probably a reference to the wheeled cart that was used to carry dishes.

34. 1964 Nobel Prize decliner SARTRE
Jean-Paul Sartre was a leading French philosopher, as well as a writer and political activist. Sartre was one of the few people to have been awarded a Nobel Prize and to have then refused to accept it. He was named winner of the prize for Literature in 1964, for his first novel “Nausea”. Before his win, Sartre knew that his name was on the list of nominees so he wrote to the Nobel Institute and asked to be withdrawn from consideration. The letter somehow went unread, so he found himself having to refuse the award after he had been selected.

35. Kitty starter ANTE
The “pot” in a card game has been referred to as the kitty since the 1880s. It’s not certain how the name “kitty” evolved but possibly it came from “kit”, the necessary equipment for the game.

37. Destructive agent BANE
Today we tend to use the word “bane” to mean anathema, a source of persistent annoyance. A few centuries ago, a bane was a cause of harm or death, perhaps a deadly poison.

38. Serengeti grazer GNU
A gnu is also known as a wildebeest, and is an antelope native to Africa. “Wildebeest” is actually the Dutch word for “wild beast”.

42. Reeling feeling VERTIGO
Vertigo is a Latin word meaning “dizziness” and has the same meaning in English. The Latin term comes from the Latin verb “vertere”, which means “to turn”.

43. Like volcanic rock IGNEOUS
There are three main types of rock: igneous, sedimentary and metamorphic. Igneous rock forms when magma or lava cools.

46. Sushi bar condiment WASABI
Sometimes called Japanese horseradish, wasabi is a root used as a condiment in Japanese cooking. The taste of wasabi is more like mustard than a hot pepper in that the vapors that create the “hotness” stimulate the nasal passages rather than the tongue. Personally, I love the stuff …

49. “Blue Bloods” network CBS
“Blue Bloods” is a police drama series about a family of police officers led by Police Commissioner Frank Reagan, played by Tom Selleck. The show has been on the air since 2010.

55. Fleur-de-__ LIS
“Lys” (also “lis”) is the French word for “lily”, as in “fleur-de-lys”, the heraldic symbol often associated with the French monarchy.