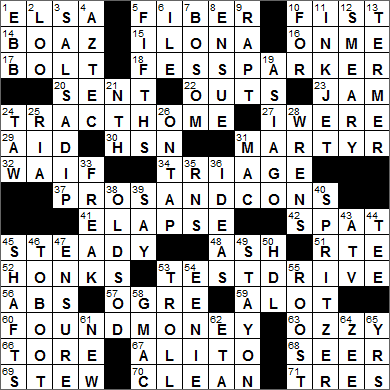 CROSSWORD SETTER: Susan Gelfand
THEME: Pros and Cons … each of today’s themed answers starts with a word that can take either the prefix PRO- or the prefix CON-

Today’s Wiki-est, Amazonian Googlies
Across
1. Lioness in “Born Free” ELSA
The life story of Elsa the lion was told by game warden Joy Adamson, who had a very close relationship with the lioness from when Elsa was orphaned as a young cub. Adamson wrote the book “Born Free” about Elsa, and then “Living Free” which tells the story of Elsa and her three lion cubs. In the 1966 film based on “Born Free”, Adamson is played by the talented actress Virginia McKenna.

5. __ optic cable FIBER
Optical fibers are lengths of glass or plastic that are slightly thicker than a human hair. They are usually bundled into cables, and then used for transmission of data signals. Optical transmission has advantages over electrical transmission, especially in terms of interference and loss of signal strength.

14. Ruth’s husband, in the Bible BOAZ
In the Bible’s Book of Ruth, the widowed Ruth marries a wealthy landowner from Bethlehem called Boaz.

15. Massey of old films ILONA
Ilona Massey was a Hollywood actress, a native of Budapest in Hungary. Given her cultural background and the period at which she hit the big screen, Massey was marketed by the studios as “the new Dietrich”.

18. Daniel Boone portrayer FESS PARKER (giving “profess” & “confess”)
The actor Fess Parker played two heroes of the West on television, namely Davy Crockett in a 1955-56 Disney mini-series and Daniel Boone in the show that ran from 1964 to 1970. Off the screen, Parker spent much of his time operating his winery in Los Olivos, California. The Fess Parker Family Winery made an appearance in the great 2004 film “Sideways”.

30. Channel for bargain hunters HSN
The Home Shopping Network (HSN) was the first national shopping network, and was launched locally as the Home Shopping Club in Florida in 1982.

31. Joan of Arc, e.g. MARTYR
Joan of Arc (also Jeanne d’Arc, her birth name) led the French Army successfully into battle a number of times during the Hundred Years War with England. When she was eventually captured, Joan was tried in Rouen, the seat of the occupying English government in France at that time. There she was burned at the stake having been found guilty of heresy. Joan of Arc was canonized some 600 years later, in 1920, and is now one of the patron saints of France.

34. MASH system TRIAGE
“Triage” is the process of prioritizing patients for treatment, especially on a battlefield. The term “triage” is French and means “a sorting”.

The first Mobile Army Surgical Hospital (MASH) was deployed in August 1945. MASH units really came into the public consciousness after publication of the 1969 Richard Hooker novel “MASH”, which spawned the hit film and TV series that were both called “M*A*S*H”.

United Parcel Service (UPS) is based in Sandy Springs, Georgia and has its own airline that operates out of Louisville, Kentucky. UPS was founded back in 1907 in Seattle, as the American Messenger Service. The company’s first delivery car was a Model T Ford.

56. Pumper’s pride ABS
The abdominal muscles (“abs”) are more correctly referred to as the rectus abdominis muscles. They are all called a “six-pack” in a person who has developed the muscles and who has low body fat. In my case, more like a keg …

59. Oodles A LOT
It’s thought that the term “oodles”, meaning “a lot”, comes from “the whole kit and caboodle”.

63. Osbourne of rock OZZY
Black Sabbath are an English heavy metal band set up in 1969 in Birmingham in the north of the country. Black Sabbath’s most famous band member was the lead singer, Ozzy Osbourne. Ozzy was kicked out of the group in 1979 as his drug usage was becoming overly disruptive.

67. Supreme Court justice since 2006 ALITO
Associate Justice Samuel Alito was nominated to the US Supreme Court by President George W. Bush. Alito is the second Italian-American to serve on the Supreme Court (Antonin Scalia was the first). Alito studied law at Yale and while in his final year he left the country for the first time in his life, heading to Italy to work on his thesis about the Italian legal system.

71. Very, in Versailles TRES
Versailles is a city located just 10 miles from the center of Paris. It is famous as home to the magnificent Palace of Versailles. The palace started out as a hunting lodge built in the village of Versailles in 1624, built for Louis XIII. Louis XIII extended the lodge into a full-blown château, but it was Louis XIV who expanded it into one of the largest palaces on the planet. Louis XIV moved the royal court from Paris to Versailles starting in 1678.

Down
2. London lav LOO
When I was growing up in Ireland, a “bathroom” was a room that had a bath and no toilet. The separate room with the commode was called “the toilet” or sometimes the W.C. (the water closet). Apparently the term closet was used because in the 1800s when homeowners started installing toilets indoors they often displaced clothes and linens in a “closet”, as a closet was the right size to take the commode. It has been suggested that the British term “loo” comes from Waterloo (water-closet … water-loo), but no one seems to know for sure. Another suggestion is that the term comes from the card game of “lanterloo” in which the pot was called the loo!

Our word “lavatory” originally referred to a washbasin, and comes from the Latin “lavatorium”, a place for washing. In the 1600s a “lavatory” came to mean a washroom, and in the 1920s a toilet.

4. Templo Mayor builder AZTEC
The Templo Mayor in the Aztec capital city of Tenochtitlan was one of the main temples. Tenochtitlan is now Mexico City, and we can only see excavated ruins today as the Spanish destroyed the site in 1521.

5. Some whiskey purchases FIFTHS
A “fifth” is an American unit of volume used for liquor. It used to be equal to one fifth of a US gallon. Since the seventies we’ve been using a “metric fifth” which is equal to 750 mL, the standard size for wine bottles around the world.

7. __ buddies BOSOM
“Bosm” is an Old English word for breast, which came into English as “bosom” meaning “breast, chest” without any association with either gender. It was only in the late fifties that the meaning narrowed to mean a woman’s breasts”. Terms like “bosom-friend” have been around since the late 16th century, and “bosom buddy” since the 1920s.

11. Printer choice INKJET
Inkjet is a very accurate and descriptive name for the type of printer. Printing is done by shooting fine jets of ink onto the page.

19. Italian cheese ASIAGO
Asiago is a crumbly cheese, named after the region in northeastern Italy from where it originates.

24. Noticed, to Tweety TAW
“I tawt I taw a puddy tat!” is a famous line uttered by Tweety Bird, the yellow canary in the “Looney Tunes” and “Merrie Melodies” cartoons who is constantly stalked by various cats.

28. Little songbirds WRENS
A wren is a small songbird belonging to the family troglodytidae and the genus troglodytes.

31. Big __: fast-food buy MAC
The iconic Big Mac sandwich was introduced nationally by McDonald’s in 1967. It was the creation of a Pittsburgh franchisee who offered it on the menu as a response to the very similar “Big Boy” sandwich offered by the competing Big Boy restaurant chain.

40. Wine-and-soda drink SPRITZER
We’ve been mixing wine with carbonated water and calling it a “spritzer” only since the early sixties. The name comes from the German “spritzen” meaning “to sprinkle, spray”, the idea being that the wine is sprinkled with water so that one’s thirst can be more easily quenched.

50. “Good” cholesterol letters HDL
HDL (high-density lipoprotein) is a compound that is used to transport fats around the body. When HDL is combined with (i.e. is transporting) cholesterol, it is often called “good cholesterol”. This is because HDL seems to remove cholesterol from where it should not be, say on the walls of arteries, and transports it to the liver for reuse or disposal. Important stuff …

53. Fairy tale bad guy TROLL
“Troll” is a term that comes from Norse mythology. Trolls are less than helpful creatures that tend to live on isolated mountains, in caves and under bridges.

54. Start of an elimination rhyme EENIE

58. Former auto financing co. GMAC
GMAC is short for General Motors Acceptance Corporation. General Motors has only a small stake in GMAC now, and indeed the name has been officially changed to Ally Bank. You and me, we are the biggest shareholders in GMAC/Ally today, since the US government gave the bank $12.5 billion to bail it out in 2008-2009.

64. New York’s Tappan __ Bridge ZEE
The Tappan Zee Bridge is more correctly called the Governor Malcolm Wilson Tappan Zee Bridge which crosses the Hudson River in New York. The bridge opened in 1955 and is showing its age. There are plans to replace it with a new bridge due to open in 2017.

The Tappan Zee is a 10-mile stretch of the Hudson River in New York, a place where there is a widening of the waterway. The name comes from the Tappan Native American people and the Dutch word “zee” meaning “sea” or “wide expanse of water”.