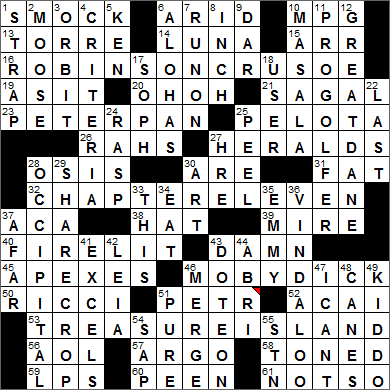 CROSSWORD SETTER: Danny Reichert
THEME: Chapter Eleven … each of today’s themed clues is the title of the ELEVENTH CHAPTER in the classic novel called out in the clue’s answer:

32A. Words creditors don’t want to hear … or what each starred clue is with reference to its answer CHAPTER ELEVEN

16. *”Finds Print of Man’s Foot on the Sand” ROBINSON CRUSOE
In Daniel Defoe’s 1719 novel “Robinson Crusoe”, the castaway encounters a companion that Crusoe calls “Friday”, because the two first met on that day. Friday soon becomes his willing servant. This character is the source of our terms “Man Friday” and “Girl Friday”, which are used to describe a particularly competent and loyal assistant.

21. Actress Katey SAGAL
Katey Sagal played Peggy Bundy on “Married … with Children”. Later she took over as star of the show “8 Simple Rules” in the middle of its run, when John Ritter passed away unexpectedly in 2003. More recently, Sagal has been appearing on the FX drama “Sons of Anarchy”. In 2004, she married Kurt Sutter who created the “Sons of Anarchy” series.

23. *”Wendy’s Story” PETER PAN
The author and dramatist J. M. Barrie is best remembered as the creator of Peter Pan. Barrie wrote a play in 1904 called “Peter Pan; or, the Boy Who Wouldn’t Grow Up”. He turned this into a novel called “Peter and Wendy” in 1911. The girl’s name “Wendy” was very uncommon before Barrie named his character, and he is given credit for making the name as popular as it is today.

25. Jai alai ball PELOTA
The essential equipment in the game of jai alai is the pelota (ball) and the cesta (wicker scoop).

32. Words creditors don’t want to hear … or what each starred clue is with reference to its answer CHAPTER ELEVEN
In the US Bankruptcy Code, Chapter 11 allows for a company or individual to reorganize affairs in the event that debts become so cumbersome that they cannot be cleared. Should the reorganization be unsuccessful, then Chapter 7 of the code might apply, which covers the sale of assets and distribution of proceeds to creditors.

37. Here, in Havana ACA
Havana is the capital city of Cuba. The city was founded by the Spanish in the early 1500s after which it became a strategic location for Spain’s exploration and conquest of the Americas. In particular, Havana was used as a stopping-off point for treasure-laden ships on the return journey to Spain.

46. *”Nightgown” MOBY DICK
The full title of Herman Melville’s novel is “Moby-Dick; or, The Whale”. Note that the convention is to hyphenate “Moby-Dick” in the title, as that was how the book was first published, in 1851. However, there is no hyphen in the name of the whale “Moby Dick” as reproduced throughout the text.

50. Wednesday Addams portrayer of film RICCI
Christina Ricci is an American actress who found fame on the big screen at an early age, playing the very young Wednesday Addams in the 1991 movie version of “The Addams Family”.

51. 1998 Australian Open winner Korda PETR
Petr Korda is a retired tennis player from Prague in the Czech Republic. Korda fell foul of the sport’s governing body when he tested positive for steroids after a 1998 match at Wimbledon.

52. Popular berry ACAI
Açaí is a palm tree native to Central and South America. The fruit has become very popular in recent years and its juice is a very fashionable addition to juice mixes and smoothies.

53. *”What I Heard in the Apple Barrel” TREASURE ISLAND
Robert Louis Stevenson’s most celebrated work I’d say is “Treasure Island”, originally written as a series for a children’s magazine in 1881. I remember “Treasure Island” as the first “real” novel I read as a youngster …

56. ISP biggie AOL
Founded as Quantum Computer Services in 1983, the company changed its name in 1989 to America Online. As America Online went international, the abbreviation AOL was used in order to shake off the “America-centric” sound to the name. During the heady days of AOL’s success the company could not keep up with the growing number of subscribers, so people trying to connect often encountered busy signals. That’s when users referred to AOL as “Always Off-Line”.

57. Ship protected by Hera ARGO
In Greek mythology, Jason and the Argonauts sailed on the Argo in search of the Golden Fleece. The vessel was called the “Argo” in honor of the ship’s builder, a man named Argus.

In Greek mythology, Hera was the wife of Zeus and was noted for her jealousy and vengeful nature, particularly against those who vied for the affections of her husband. The equivalent character in Roman mythology was Juno. Hera was the daughter of Cronus and Rhea.

59. Many Sam Goody sales LPS
San Goody was a chain of music and entertainment stores that went bankrupt in 2006. The first store was opened by Sam “Goody” Gutowitz, way back in the late 1940s in New York City.

60. It hits the nail on the head PEEN
The peen of a hammer is on the head, and is the side of the head that is opposite the striking surface. Often the peen is in the shape of a hemisphere (as in a ball-peen hammer), but usually it is shaped like a claw (mainly for removing nails).

Down
1. Pump part, perhaps STRAP
A pump is a woman’s shoe that doesn’t have a strap. Such shoes are probably called “pumps” because of the sound they make while walking in them.

2. Maine flag image MOOSE
Maine’s state flag features the state coat of arms on a blue background. The center of the shield depicts a moose resting under a pine tree, and the shield is supported by a farmer and seaman. The North Star sits atop the shield.

5. One of a toydom pair KEN
Barbie’s male counterpart doll is Ken, and Ken’s family name is Carson. Barbie’s full name is Barbie Millicent Roberts. When Ken was introduced in 1959, it was as Barbie’s boyfriend. In 2004 it was announced that Ken and Barbie were splitting up, and needed to spend quality time apart. Soon after the split, Barbie “met” Blaine, a boogie boarder from Australia.

6. Words heard coming and going ALOHAS
The Hawaiian word “Aloha” has many meanings in English: affection, love, peace, compassion and mercy. More recently “aloha” has come to mean “hello” and “goodbye”, but only since the mid-1800s.

7. Extended sentence RUN ON
A “run-on sentence” is one in which two separate clauses are linked without appropriate conjugation. Two examples would be:

10. __ chai: spiced tea MASALA
Masala chai is an Indian drink made with black tea (the “chai) and mixed spices (the “masala”).

11. Woods, e.g. PRO GOLFER
By now, everyone must know everything there is to know about Tiger Woods. But did you know that Tiger’s real name is Eldrick Tont Woods? “Tont” is a traditional Thai name.

12. Marmaduke of the comics is one GREAT DANE
Marmaduke is the title character in a newspaper comic strip that has been drawn by Brad Anderson since 1954. Marmaduke is a Great Dane, and the pet dog of the Winslow family.

17. Jr. preceder SOPH
The term “sophomore” has been used for a student in the second year of university since the 1680’s. The original meaning of the word was “arguer”. The term has Greek roots, from two Greek words that have been artificially combined in English. The Greek “sophos” means “wise”, and “moros” means “foolish”.

27. Central Eur. power until 1806 HRE
The Holy Roman Empire (HRE) existed from 962 to 1806 AD and was a territory of varying size over the centuries that centered on the Kingdom of Germany. The HRE was a successor to the western half of the Ancient Roman Empire.

28. __ lobe: brain area OCCIPITAL
The occipital lobe is one of the four main lobes of the brain, the others being the frontal lobe, parietal lobe and the temporal lobe. The lobe is at the posterior of the brain and is named for the occipital bone, which covers it. The term “occipital” comes from the Latin “ob” meaning behind, and “caput” meaning head. The occipital lobe’s main role is the processing of visual information.

29. What tenant farmers do SHARECROP
The farming system known as “sharecropping” is an arrangement in which a landowner permits a tenant to farm the land in return for a share of the resulting crops.

30. It’s “not what you see, but what you make others see”: Degas ART
Edgar Degas was a French artist, famous for his paintings and sculptures. Some of Degas’ most beautiful works feature female ballet dancers, and others depict women bathing.

35. Award since 1949 EMMY
The Emmy Awards are the television equivalent of the Oscars in the world of film, the Grammy Awards in music and the Tony Awards for the stage. Emmy Awards are presented throughout the year, depending on the sector of television being honored. The most famous of these ceremonies are the Primetime Emmy Awards and the Daytime Emmy Awards. The distinctive name of “Emmy” is a softened version of the word “immy”, the nickname given to the video camera tubes found in old television cameras.

42. One of a pair of sci-fi twins LEIA
The full name of the character played by Carrie Fisher in the “Star Wars” series of films is Princess Leia Organa of Alderaan, and later Leia Organa Solo. Leia is the twin sister of Luke Skywalker, and the daughter of Anakin Skywalker (aka Darth Vader) and Padmé Amidala. Leia is raised by her adoptive parents Bail and Breha Organa. She eventually marries Han Solo.

44. Dugout shelter ABRI
An abri is a shelter or place to hide, especially in wartime. “Abri” is a term that we borrow from French.

46. Construction area sign MERGE
The “zipper merge” or “late merge” is encouraged by most traffic authorities when two lanes of traffic are merging into one. The alternative “early merge”, where cars move out of the lane that is closing before reaching the merge point, tends to be discouraged. The favored technique is to use both lanes until the merge point, and then alternate (zipper) from each lane through the merge itself. That said, one should always obey whatever instructions are given by the traffic authorities at the scene. And I know, a lot of people think it rude not to merge early …

48. Props for Astaire CANES
Fred Astaire’s real name was Frederick Austerlitz. Fred was from Omaha, Nebraska and before he made it big in movies, he was one half of a celebrated music hall act with his sister Adele. The pair were particularly successful in the UK, and Adele ended up marrying into nobility in England, taking the name Lady Charles Cavendish.

54. Easy mark SAP
“Sap” is slang for a fool, someone easily scammed. The term arose in the early 1800s in Britain when it was used in “saphead” and “sapskull”. All these words derive from “sapwood”, which is the soft wood found in tree trunks between the bark and the heartwood at the center.

55. Penn, e.g.: Abbr. STN
Penn Station in New York City may have been the first Pennsylvania Station, but it’s not the only one. The Pennsylvania Railroad gave that name to many of its big passenger terminals, including one in Philadelphia (now called 30th Street Station), one in Baltimore, one in Pittsburgh, one in Cleveland, as well as a few others.