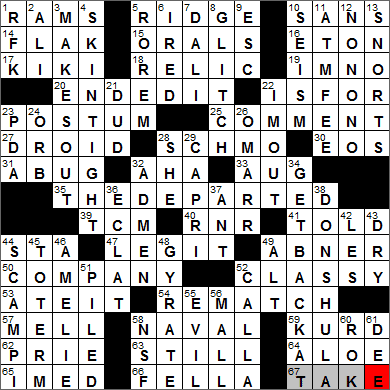 CROSSWORD SETTER: Loren Smith & Jeff Chen
THEME: A Part Missing … each of the them answers is missing a PART:

Today’s Wiki-est, Amazonian Googlies
Across
5. *Noel bird (PART)RIDGE
The fabulous Christmas Carol called “The Twelve Days of Christmas” dates back at least to 1780 when it was first published in England, and may be French in origin. The concept of twelve days of Christmas comes from the tradition that the three kings came to visit the Christ Child twelve days after he was born. This same tradition is the origin of the title to Shakespeare’s play “Twelfth Night”.

10. *East Lansing athletes S(PART)ANS
Michigan State University (MSU) is located in East Lansing, Michigan. MSU has the largest study-abroad program of any single-campus university in the US. Programs are offered on all continents of the world, including Antarctica.

14. Verbal jabs FLAK
“Flak” was originally an acronym from the German term for an aircraft defense cannon (FLiegerAbwehrKanone). Flak then became used in English as a general term for antiaircraft fire, and ultimately a term for verbal criticism, as in “take flak”.

16. School that celebrates George III’s birthday ETON
Eton College in England celebrates the “Fourth of June” annually in honor of its greatest patron, King George III. June 4th was the birthday of the king, but these days Eton’s June 4th is celebrated on the Wednesday before the first weekend of June. There is a tradition that the Eton rowing crews participate in the Procession of Boats in vintage rowing boats.

17. With 61-Down, Elton John duet partner KIKI
(61. See 17-Across DEE)
Kiki Dee is an English singer, best known for her hit duet with Elton John from 1976 called “Don’t Go Breaking My Heart”. Kiki Dee had the honor of being the first Caucasian singer to be signed by Motown.

19. “__ Angel”: Mae West film I’M NO
“I’m No Angel” is an 1933 film starring Mae West and a very young Cary Grant who just making a name for himself in Hollywood. “I’m No Angel” gives us some iconic Mae West quotations:

– Come up and see me sometime. (Repeated with slight variations.)
– Beulah, peel me a grape.
– It’s not the men in your life that counts, it’s the life in your men.
– When I’m good I’m very good. But when I’m bad I’m better.

27. C-3PO, for one DROID
C-3PO, Threepio for short, is the “protocol droid” appearing in all six “Star Wars” movies.

28. Nincompoop SCHMO
“Schmo” is American slang for a dull or boring person, from the Yiddish word “shmok”.

The word “nincompoop” meaning an “ass” seems to have been around for quite a while, since the 1670s, but no one appears to know its origins.

30. Dawn goddess EOS
In Greek mythology, Eos is the goddess of the dawn who lived at the edge of the ocean. Eos would wake each morning to welcome her brother Helios the sun. The Roman equivalent of Eos is Aurora.

32. “Eureka!” AHA!
Eureka translates from Greek as “I have found it”. The word is usually associated with Archimedes, uttered as he stepped into his bath one day. His discovery was that the volume of water that was displaced was equal to that of the object (presumably his foot) that had been submerged. He used this fact to determine the volume of a crown, something he needed in order to determine if it was made of pure gold or was a forgery.

35. 2006 Scorsese film, and a hint to answering this puzzle’s starred clues THE DEPARTED
The movie director Martin Scorsese is very much a New York City native, and is well-known for directing movies set in the Big Apple. Among the list of great Scorsese films are “Taxi Driver”, “Raging Bull”, “Goodfellas”, “Cape Fear”, “Casino” and “The Departed”.

39. Airer of many Cary Grant films TCM
Turner Classic Movies (TCM) is one of my favorite television channels, delivering just what its name promises: classic movies.

Cary Grant was an actor from England who made it big, really big in Hollywood. “Cary Grant” is a stage name, chosen by Archibald Leach. There’s a great moment in the film “His Girl Friday” when Grant says the line “I never had so much fun since Archie Leach died”, an inside joke.

40. Staycation benefit, for short RNR
R&R or RnR is “rest and recreation”. I love staycations …

44. NYC’s Penn, e.g. STA
Penn Station in New York City may have been the first Pennsylvania Station, but it’s not the only one. The Pennsylvania Railroad gave that name to many of its big passenger terminals, including one in Philadelphia (now called 30th Street Station), one in Baltimore, one in Pittsburgh, one in Cleveland, as well as others.

49. Capp chap ABNER
“Li’l Abner” was created and drawn by Al Capp for over 43 years starting in 1934. Al Capp stopped producing the strip in 1977, largely due to illness (he died from emphysema two years later). As the strip finished up, he went so far as to apologize to his long-standing fans, saying that he should have stopped 3-4 years earlier as he felt that the quality of his work had gone down in those latter years.

57. Cartoonist Lazarus MELL
Mell Lazarus is known as the creator of two long-running comic strips. “Miss Peach” ran from 1957 to 2002, and “Momma” first appeared in 1970 and is still going strong. Lazarus started his career as an apprentice to famed cartoonist Al Capp.

59. Many a Kirkuk resident KURD
Most of the Kurdish people live in a region known as Kurdistan, which stretches into parts of Iran, Syria, Turkey as well as northern Iraq.

Kirkuk is a city in northern Iraq.

62. __-dieu PRIE
Prie-dieu literally means “pray (to) God” in French. A prie-dieu is basically a padded kneeler, with an armrest in front and a shelf on which one placed books of prayer.

64. Tissue additive ALOE
Aloe vera has a number of alternate names that are descriptive of its efficacy as a medicine. These include the First Aid plant, Wand of Heaven, Silent Healer and Miracle Plant.

Down
1. __ Stadium, home of D.C. United RFK
Robert F. Kennedy Memorial Stadium was opened in 1961 as the District of Columbia Stadium, and is actually owned by the District of Columbia. The stadium was renamed in 1969, a few months after Robert Kennedy was assassinated. Kennedy had been instrumental the racial integration of the Washington Redskins who played in the stadium for 36 seasons. As Attorney General, Kennedy threatened to oust the Redskins from the federally-owned stadium unless the team agreed to sign African American players.

2. Bard of boxing ALI
Cassius Marcellus Clay, Jr. was born in 1942 in Louisville, Kentucky. Clay changed his name to Muhammad Ali when he converted to Islam in 1964. Who can forget Muhammad Ali lighting the Olympic flame for the 1996 games in Atlanta? Ali was presented with a gold medal during those ’96 Games, a replacement for the medal he won at the 1960 Olympics. He had thrown the original into the Ohio River as a gesture of disgust after being refused service at a “whites only” restaurant.

5. Composer of the 2005 opera “Our Town” ROREM
American composer Ned Rorem is famous for his musical compositions, but also for his book, “Paris Diary of Ned Rorem” that was published in 1966. Rorem talks openly about his sexuality in the book, and also about the sexuality of others including Noel Coward, Leonard Bernstein and Samuel Barber, much to some people’s chagrin.

7. “The Persistence of Memory” surrealist DALI
The famous surrealist painter Salvador Dalí was born in Figueres, Spain. I had the privilege of visiting the Dalí Museum in Figueres some years ago, just north of Barcelona. If you ever get the chance, it’s a “must see” as it really is a quite magnificent building with a fascinating collection.

“The Persistence of Memory” is probably Salvador Dalí’s most famous work, featuring the celebrated “melting clocks”. And you can see it in the MoMA in New York City.

13. Corral chorus SNORTS
“Corral” is the Spanish word for an enclosure for livestock, and is a word we’ve imported into English. Ultimately, the term comes from the Vulgar Latin “currale” meaning “enclosure for carts”, itself coming from “currus”, the Latin for “cart”.

23. iPhone, e.g. PDA
A device like perhaps an iPhone, Droid, or Treo can be termed a Personal Digital Assistant (PDA).

26. Astrologer Sydney OMARR
Sydney Omarr was an astrology consultant to the rich and famous, and author of a horoscope column that appeared in the Los Angeles Times. While Omarr (real name Sidney Kimmelman) was in the US Army he even wrote a horoscope column for “Stars and Stripes”. He claimed that he got the job of writing for “Stars and Stripes” after having giving a consultation to President Franklin D. Roosevelt.

29. Tyrrhenian Sea resort CAPRI
The island of Capri off the coast of Southern Italy has been a tourist resort since the days of ancient Rome. Capri is home to the famous Blue Grotto, a sea cave that is illuminated with sunlight that’s colored blue as it passes through the seawater into the cave.

The Tyrrhenian Sea is that part of the Mediterranean that lies off the west coast of Italy. It is bounded on the north and east by the Italian mainland, on the west by the large islands of Corsica and Sardinia, and on the south by Sicily.

36. Showy display ECLAT
Éclat can mean a brilliant show of success, or the applause or accolade that one receives. The word derives from the French “éclater” meaning “to splinter, burst out”.

42. Guitarist Paul LES
Les Paul was a guitarist, songwriter and inventor. When he was 33 years old, Paul was involved in a near-fatal car crash that left his right arm and elbow shattered. Surgeons offered him the choice of amputation or a rebuilding of the limb that would leave him unable to bend his elbow. He told them to set his arm at just under 90 degrees so that he could at least hold his guitar and perhaps play it.

44. Shellfish entrée SCAMPI
The Italian dish known as “scampi” is a serving of shrimp in garlic butter and dry white wine.

46. 2001 French title heroine AMELIE
“Amélie” is a French film, a romantic comedy about a shy waitress in Montmartre, Paris played by Audrey Tatou. The movie was originally released under the French title, “Le Fabuleux Destin d’Amélie Poulain” (“The Fabulous Destiny of Amélie Poulain”).

48. Use a Hula-Hoop GYRATE
Hula hoops were a big craze in the 1950s, but they have been around in various forms at least since the year 500 BCE!

52. Easter lily CALLA
The Calla Lily is a common name for a lily of the genus Zantedeschia. There is a lily genus called Calla, but the Calla Lily isn’t in it. Now that, that is confusing …

60. Seoul soldier ROK
A South Korean soldier is known as an ROK, named after the acronym for the Republic of (South) Korea.