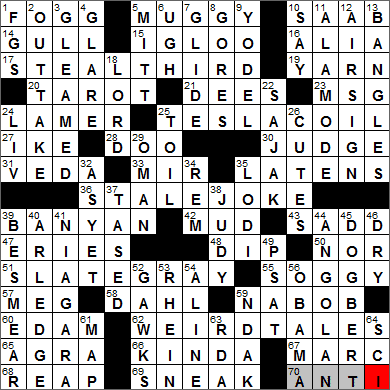 17A. Get closer to home? STEAL THIRD
25A. Electrical device named for its inventor TESLA COIL
36A. Chestnut STALE JOKE
51A. Dress pants shade SLATE GRAY
62A. Classic horror magazine, and a literal hint to the beginning of 17-, 25-, 36-, and 51-Across WEIRD TALES

Today’s Wiki-est, Amazonian Googlies
Across
1. Fictional circumnavigator Phileas FOGG
“Around the World in 80 Days” is just a wonderful adventure story, written by French author Jules Verne and first published in 1873. There have been some great screen adaptations of the story, including the 1956 movie starring David Niven as Philieas Fogg. In almost all adaptations, a balloon is used for part of the journey, perhaps the most memorable means of transportation on Fogg’s trip around the world. However, if you read the book, Fogg never used a balloon at all.

5. Like weather that makes hair frizz MUGGY
Not mine …

10. European auto SAAB
SAAB stands for Svenska Aeroplan AB, which translates into English as Swedish Aeroplane Limited. SAAB was, and still is, mainly an aircraft manufacturer. If you take small hops in Europe you might find yourself on a SAAB passenger plane. The SAAB automobile division was acquired by General Motors in the year 2000, who then sold it to a Dutch concern in 2010. However, SAAB (automotive) finally went bankrupt in 2011.

20. Fortuneteller’s card TAROT
Tarot cards have been around since the mid-1400s, and for centuries were simply used for entertainment as a game. It has only been since the late 1800s that the cards have been used by fortune tellers to predict the future.

23. Lo mein additive MSG
Monosodium glutamate (MSG) is the sodium salt of a naturally-occurring,non-essential amino acid called glutamic acid. It is used widely as a flavor enhancer, particularly in many Asian cuisines. Whether or not it is harmful seems to be still under debate. I say that something produced in a test tube shouldn’t be in our food …

25. Electrical device named for its inventor TESLA COIL
A Tesla coil is used to create the high voltages needed to ionize air in those pyrotechnic shows where sparks jump from globe to globe. The same technology was used up to the twenties in spark-gap radio transmitters which were central to wireless telegraphy back then.

28. __-wop DOO
Doo-wop developed in the 1940s and can be described as a vocal-based R&B music. Even though the style has been around since the forties, the name doo-wop wasn’t introduced until the early sixties.

30. With 38-Down, “People’s Court” rival JUDGE
(38. See 30-Across JUDY)
Judge Judy of television fame is actually Judith Sheindlin, a retired family court judge from New York. Ms. Sheindlin’s contract was renewed in the middle of 2010, so that she now earns $45 million per year taping her show. That’s a tad more than she was earning on the “real” bench I think …

31. Sacred Hindu work VEDA
The Vedas are a body of ancient Indian texts, the oldest Hindu scriptures. The word “véda” is Sanskrit, and means “knowledge, wisdom”.

33. Space station for about 15 years MIR
The Russian Mir Space Station was a remarkably successful project, with the station still holding the record for the longest continuous manned presence in space, at just under ten years. Towards the end of the space station’s life however, the years began to take their toll. There was a dangerous fire, multiple system failures, and a collision with a resupply ship. The Russian commitment to the International Space Station drained funds for repairs, so Mir was allowed to reenter the Earth’s atmosphere and burn up in 2001.

39. Spreading Indian tree BANYAN
The banyan is a fig and germinates in cracks and crevices of a host tree and then sends roots down towards the ground. The roots that head down the the host give rise to a familiar name for the banyan: the strangler fig.

43. Teen safety org. SADD
Students Against Destructive Decisions (SADD) was founded in Massachusetts in 1981. SADD’s aim is to prevent road traffic accidents by urging students to avoid potentially destructive decisions (such as driving under the influence of alcohol).

47. Great Lakes natives ERIES
The Erie people were Native Americans who lived on the south shore of Lake Erie. The Erie lost out in wars with the Iroquois in the 1700s. The remnants of the Erie people were absorbed into neighboring tribes.

50. Scand. land NOR
Norway has been ranked as the country in the world with the highest standard of living almost every year since 2001. Norway is rich in natural resources and has a relatively low population. The people benefit from a comprehensive social security system, subsidized higher education for all citizens and universal health care.

57. Eldest March sister, in a 19th-century novel MEG
“Little Women” is of course a novel written by American author Louisa May Alcott. The quartet of little women is Meg, Jo, Beth and Amy March. Jo is a tomboy and the main character in the story and is based on Alcott herself.

58. Wonka’s creator DAHL
Roald Dahl’s name is Norwegian. Dahl’s parents were from Norway, although Dahl himself was Welsh. Dahl became one of the most successful children’s authors of the twentieth century. Two of his most famous titles are “James and the Giant Peach” and “Charlie and the Chocolate Factory”.

59. Big cheese NABOB
A nabob is a person of wealth and prominence. “Nabob” derives from the title of a governor in India.

60. Big cheese in Holland EDAM
Edam cheese takes its name from the Dutch town of Edam in North Holland. The cheese is famous for its coating of red paraffin wax, a layer of protection that helps Edam travel well and prevents spoiling. You might occasionally come across an Edam cheese that is coated in black wax. The black color indicates that the underlying cheese has been aged for a minimum of 17 weeks.

The most famous mausoleum in the world has to be the Taj Mahal in Agra, India. The Taj Mahal was built after the death of the third wife of Shah Jahan, Mumtaz Mahal (hence the name of the mausoleum). The poor woman died in childbirth delivering the couple’s 14th child.

67. Artist Chagall MARC
Marc Chagall was a Russian-French artist, one of the most successful of the 20th century. Unlike so many painters, Chagall was able to achieve wealth and notoriety for his work during his own lifetime. It did help that Chagall lived to a ripe old age though. He passed away in 1985, when he was 97 years young.

11. Pie order A LA MODE
In French, “à la mode” simply means “fashionable”. In America, the term has come to describe a way of serving pie, usually with ice cream, or as I recall from when I lived in Upstate New York, with cheese.

12. Libra, for one AIR SIGN
Each of the twelve astrological signs is associated with one of the classical elements:

13. “Manic Monday” band BANGLES
The Bangles are a band that formed in Los Angeles in 1980, a trio of female musicians. They went through a few names before settling on the Bangles, namely the Colours, the Supersonic Bangs and the Bangs. The Bangles’ biggest hits are “Manic Monday” (1986), “Walk Like an Egyptian” (1986) and “Eternal Flame” (1989).

18. Fauntleroy’s title LORD
“Little Lord Fauntleroy” is a novel written by English author and playwright Frances Hodgson Burnett. “Little Lord Fauntleroy” was more than a well-received work of fiction as the book had a great impact on fashion in the late 1800s. The young Fauntleroy wore a suit that Burnett described in great detail, a suit that was illustrated in the book in pen-and-ink drawings. It had a velvet cut-away jacket and knee pants that matched, and was worn with a blouse that had a ruffled collar. Mothers often dressed their young boys in these “Fauntleroy suits” in the late 19th and early 20th century, especially here in North America.

22. White co-worker SAJAK
Pat Sajak took over the hosting of “Wheel of Fortune” back in 1983 and has been doing the job ever since. Sajak had a short run as a talk show host in 1989/1990 and used to sub quite often for Larry King and Regis Philbin.

24. Actress Tyler LIV
Actress and model Liv Tyler is the daughter of Steven Tyler, lead singer with Aerosmith, and Bebe Buell, a celebrated model and singer.

29. Muscat’s sultanate OMAN
Oman lies on the southeast coast of the Arabian Peninsula and is neighbored by the OAE, Saudi Arabia and Yemen. The capital city of Muscat has a strategic location on the Gulf of Oman and has a history of invasion and unrest. Centuries of occupation by the Persians ended in 1507 when the Portuguese took the city in a bloody attack. The Portuguese held Muscat for much of the next one hundred years until finally being ousted by local Omani forces in 1648. A Yemeni tribe invaded the area in 1741 and set up a monarchy that has been in place in Oman ever since.

34. Sleep stage letters REM
REM is an acronym standing for Rapid Eye Movement sleep. REM sleep takes up 20-25% of the sleeping hours and is the period associated with one’s most vivid dreams.

35. Wine city near Sacramento LODI
Lodi, California may not be as well known a wine producer as Sonoma and Napa counties, but has been given the moniker “Zinfandel Capital of the World”.

37. Used a stun gun on TASED
Victor Appleton wrote a novel for young adults called “Tom Swift and His Electric Rifle”. The company that developed the TASER electroshock weapon named its product as a homage to the novel. The acronym TASER stands for “Thomas A. Swift’s Electric Rifle”. Interesting, eh?

40. TV news exec Roone ARLEDGE
Roone Arledge was an executive at ABC. Arledge made a name for himself in sports broadcasting and then took over ABC News in 1977, a position he held until his death in 2002.

44. Luanda native ANGOLAN
Angola is a country in south-central Africa, on the west coast. Angola is the fourth largest diamond exporter in Africa, after Botswana, the Congo and South Africa. Such a valuable export hasn’t really helped the living standard of the country’s citizens as life expectancy and infant mortality rates are among the poorest on the continent.

Luanda is the capital city of Angola. Luanda is a large seaport that was founded by the Portuguese in 1576. For centuries, Luanda served as the main center of the slave trade from Africa to the Portuguese colony of Brazil.

45. Bespectacled cartoon canine who was once a CEO DOGBERT
Dogbert is a character in the Scott Adams comic strip “Dilbert”. Dogbert celebrates his birthday on June 8, which also happens to be the birthday of Scott Adams himself.

46. Oenophile’s “sec” DRY
“Sec” is a French term meaning “dry”, and is most familiar on this side of the Atlantic when used to describe wine.

53. Deutschland river RHEIN
The river running through Germany that we know in English as the Rhine, is called “Rhein” in German.

54. Flared dress A-LINE
An A-line skirt is one that fits snugly at the hips and flares toward the hem.

56. “The Audacity of Hope” author OBAMA
President Obama served three terms in the Illinois State Senate, from 1997 to 2004. The future President ran unsuccessfully for the US House of Representatives in 2000, and then successfully for the US Senate in 2004. Famously, State Senator Obama delivered the keynote address to the Democratic National Convention in 2004, just a few months before winning that US Senate seat.