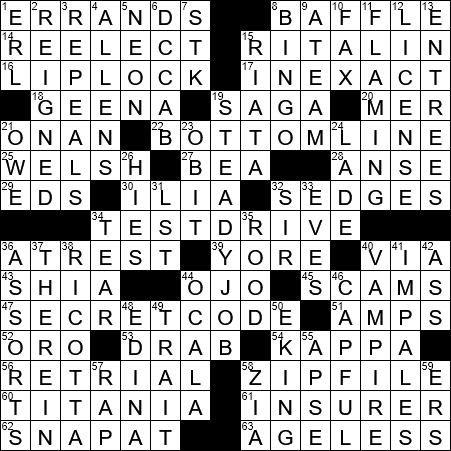 Each of today’s themed answers often precede the word ZIP:

I guess “ziplock” is the generic adjective used to describe resealable zipper storage bags. The Ziploc brand storage devices were developed by Dow and introduced in 1968.

Cardiff, located on the country’s south coast, has been the capital of Wales since 1955. “Cardiff” is an anglicized form of “Caerdydd”, the city’s name in Welsh.

“Luck Be a Lady” is a song written by Frank Loesser for his Broadway musical “Guys and Dolls” that premiered in 1950. Some years later, “Luck Be a Lady” became a signature song for Frank Sinatra.

“Guys and Dolls” is a musical with music and lyrics by Frank Loesser. It was first produced on Broadway, in 1950, and ran for 1200 performances. The show was based on a book written by Jo Swerling and Abe Burrows, which book was inspired by the short stories :The Idyll of Miss Sarah Brown” and “Blood Pressure” by Damon Runyon. “Guys and Dolls” was chosen as winner of a Pulitzer in 1951, but the award was cancelled as Abe Burrows was having problems with the House Un-American Activities Committee at the time.

Shia LaBeouf is an actor who started out in the Disney television series “Even Stevens”. Adult audiences might be more familiar with his leading role in the 2003 film “Holes”.

The term “unplugged” is commonly used for music played on acoustic instruments that is usually played on amplified instruments, often electric guitars.

In Spanish, “oro” (gold) is a “metal precioso” (precious metal).

58. Compressed data … and what the ends of the answers to starred clues form? : ZIP FILE

A .ZIP file is one that has been compressed. The ZIP file format was co-developed and introduced by programmer Phil Katz in 1989.

“Der Erlkönig” (“The Erl King”) is a poem by the German writer Johann Wolfgang von Goethe. The poem tells of the death of child attacked by the Erl King, a supernatural being. The Austrian composer Franz Schubert made a musical adaptation of Goethe’s poem, using the same title.

George Burns was the stage name of comedian and actor Nathan Birnbaum. Famously, Burns was married to Gracie Allen, who initially acted as “straight man” in their double act. The duo found that they got more laughs with Gracie acting as “Dumb Dora”, an arrangement that Burns and Allen stuck to for decades.

“D.C. Cab” is a comedy movie released in 1983 starring Mr. T. I don’t hear many good things about the film, although there is a special appearance by Irene Cara of “Fame” fame …

When we run a “tab” at a bar say, we are running a “tabulation”, a listing of what we owe. Such a use of “tab” is American slang that originated in the 1880s.

“LST” stands for Landing Ship, Tank. LSTs are the large vessels used mainly in WWII that have doors at either ends through which tanks and other vehicles can roll off and onto beaches. The design concept persists to this day in the huge fleet of commercial roll-on/roll-off car ferries, all inspired by the LST.

They would be Christmas Eve and New Year’s Eve.

Ricotta is an Italian cheese made from the milk of a sheep or a cow. Ricotta is actually produced from the whey of the milk, the liquid left after the curds have been separated out (curds are used to make “traditional” cheese). The whey is heated again so that the remaining protein, above and beyond that in the curd already removed, precipitates out making ricotta cheese. The word “ricotta” literally means “recooked”, which makes sense to me now …

Aesop used the ass in at least four of his fables:

The city of Ocala was founded near a historic village with the same name. In the local Timucua language “Ocala” means “Big Hammock”.

Muhammad Zia-ul-Haq was the President of Pakistan from 1978 until he died in 1988. Zia died in a plane crash along with US Ambassador to Pakistan Arnold Lewis Raphel and several other VIPs. The official Pakistani investigation into the cause of the crash concluded that the plane was likely brought down by sabotage. The official US investigation concluded that the crash was an accident.