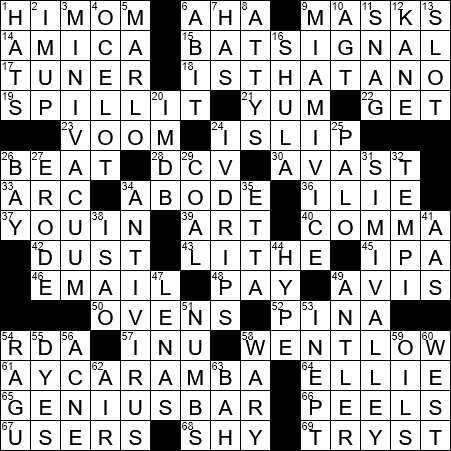 Themed answers are all in the down-direction, and each contains the letter sequence “IV” hidden within:

Batman is an ally of Police Commissioner Gordon of Gotham City. Gordon orders the shining of a searchlight, known as the Bat-Signal, into the sky to summon Batman when he is needed.

The town of Islip on the south shore of Long Island is home to Islip Airport. Now known as Long Island MacArthur Airport, it is used by many as a viable alternative to JFK and LaGuardia.

40. Punctuation in many lists : COMMA

The KitchenAid brand of home appliances were introduced in 1919 by the Hobart Corporation. The first product produced was the famous KitchenAid line of stand mixers.

Ellie Goulding is a singer-songwriter from England. One of Goulding’s claims to fame is that she sang at the wedding reception of Prince William and Kate Middleton at Buckingham Palace in 2011.

“Love Me Like You Do” is a 2015 song recorded by English singer-songwriter Ellie Goulding. The song was written specifically for the soundtrack of the movie “Fifty Shades of Grey”.

A rendezvous is a meeting. The noun used in English come the French phrase “rendez vous” meaning “present yourselves”.

Marlo Thomas’s most famous role was playing the title character in the television sitcom “That Girl”. Thomas is also well known as a spokesperson for St. Jude Children’s Research Hospital.

The Tampa Bay Buccaneers joined the NFL in 1976 along with the Seattle Seahawks as expansion teams. The Bucs had a tough start in the NFL, losing their first 26 games. Things went better in the early eighties, but then the team went through 14 consecutive losing seasons. Their luck changed again though, and they won the Super Bowl at the end of the 2002 season.

The vast coalfields of West Virginia were used to fuel, literally, the Industrial Revolution in the United States. It is, perhaps, no surprise that the West Virginia official state rock is bituminous coal.

54. Sauce brand with an accent on its last letter : RAGU

OXY 10 is a brand name for a medication with the active ingredient benzoyl peroxide. Benzoyl peroxide is used as an acne treatment, as well as for dyeing hair, for whitening teeth and in the preparation of flour.