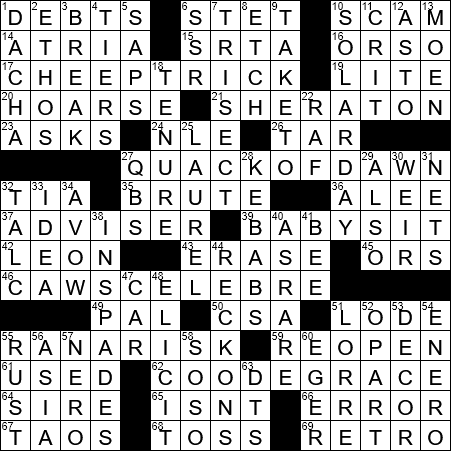 Today’s Theme (according to Bill): This Puzzle’s a Hoot!

Themed answers each sound like a common phrase, but one word has been replaced with a sound made by a bird:

The Sheraton Hotel chain was started by Ernest Henderson and Robert Moore in 1937. The pair bought a hotel that already had a lighted sign on its roof saying “Sheraton Hotel”, and as it was too big and expensive to change, they decided to adopt the name for the whole chain.

Tia Maria is a coffee liqueur that was invented just after WWII in Jamaica using Jamaican coffee beans, Jamaican rum, vanilla and sugar. The drink’s name translates to “Aunt Maria”.

“Cause célèbre” is a French phrase that we have imported into English to describe an issue that arouses widespread controversy. The expression translates from French as “famous case”. The term originated with a large collection of court decisions published in 1762 called “Nouvelles Causes Célèbres”.

50 Letters from the Civil War : CSA

A bonanza is a mine with a rich pocket of ore that can be exploited. “Bonanza” is the Spanish word for a rich lode, and we imported the term into English. “Bonanza” originally meant “fair weather at sea”, and from that came to mean “prosperity, good fortune”. Ultimately, “bonanza” comes from the Latin “bonus” meaning “good”.

“Coup de grâce” is a French phrase that we use in English to describe the final blow that puts a person or animal out of their misery. The phrase is used both literally and figuratively, and translates from French as “blow of mercy”.

Kit Carson was a frontiersman who moved west from Missouri when he was just 16 years old. Kit Carson’s life was immortalized in the novels of John C. Fremont, an explorer who hired Carson as a guide for his travels through California, Oregon and Nevada. Carson later served with the US Army. He is thought to be the only American to have achieved the rank of general without being able to read or write.

A solar day is the time taken for a planet to rotate completely about its axis so the sun reappears in the same position in the sky. A solar day on Earth is 24 hours. A solar day on Mars is just under 24 hours, and is referred to as a “sol”.

The Moen line of faucets was started in 1956 by inventor Alfred M, Moen. It was Moen who invented the first single-handed mixing faucet.

Kohler is a manufacturer of plumbing products based in Kohler, a village in Wisconsin that was renamed in 1912 in honor of the company. The Kohler Company was founded in 1873 by Austrian immigrants John Kohler and Charles Silberzahn.

Mike Weir is a Canadian, left-handed golfer who plays on the PGA tour. Weir won the 2003 Masters Tournament.

The phrase “in spades” meaning “in abundance” dates back to the late twenties. The term probably comes from the game of bridge, in which spades are the highest-ranking suit.

41 Contest where participants stand for a spell : BEE

51 He played Ugarte in “Casablanca” : LORRE

HGTV first went on air in 1994, as the “Home, Lawn and Garden Channel”. The name was shortened soon after (the lawn was “cut”!). Nowadays, it’s referred to as HGTV.

In Spanish, the years starts off with “enero, febrero, marzo” (January, February, March).

Seneca the Younger was a tutor and advisor to Nero, emperor of ancient Rome. Although maybe innocent, Seneca was forced to commit suicide by Nero as it was alleged that Seneca participated in a plot to kill the emperor. To kill himself, Seneca cut into a number of veins in order to bleed to death.

Eger is a city in the northeast of Hungary that is noted for its thermal baths and for its wine production. Back in Ireland, I would quite often drink “Bull’s Blood”, which is Hungary’s most famous red wine, and which comes from the Eger wine region.