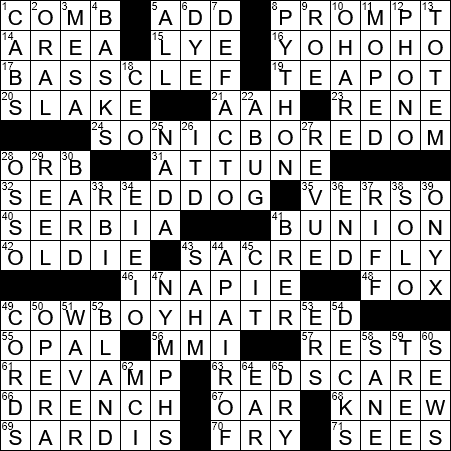 We have a RED SCARE in today’s grid, with the letter sequence “RED” infiltrating common phrases to give the themed answers:

To slake is to satisfy a craving, as in slaking one’s thirst.

“All My Loving” is a 1963 song performed by the Beatles and written by Paul McCartney. According to McCartney, it is one of the only of his songs for which he wrote the lyrics first, and then put to them to music.

46. Where some nursery rhyme baking occurs : IN A PIE

“Sing a Song of Sixpence” is an English nursery rhyme that dates back to the 1700s. In the rhyme there are a couple of lines that have always intrigued me:

“2001: A Space Odyssey” is a groundbreaking 1968 sci-fi film that was inspired by an Arthur C. Clarke short story “The Sentinel”. Clarke and director Stanley Kubrick teamed up to write the film’s screenplay. While working on the screenplay, Clarke wrote a novel with the same title as the film, and published it soon after the release of the movie.

After WWII the United States went through what was called a “Red Scare”, the fear of communist infiltration in American society and government. Senator Joseph McCarthy became a lightning rod for this movement when he chaired Senate hearings in the fifties designed to root out communist infiltrators. The period (1947-1956) is referred to as the Second Red Scare. The First Red Scare was at its height in 1919-1920, and was a fear of Bolshevism that arose after the Russian Revolution.

The zany comedy show called “Monty Python’s Flying Circus” first aired in 1969 on the BBC. The show ran for four seasons and finished up soon after John Cleese decided to leave the team and move onto other projects.

The word “moped” was coined in 1952 by a Swedish journalist called Harald Nielsen. The term is a portmanteau of “motor” and “pedal”.

In Spanish, “uno menos uno” (one minus one) gives “nada” (nothing).

Miguel de Unamuno was a Spanish author from the nation’s Basque Country.

“Osso” is the Italian word for bone, as in the name of the dish “osso buco”, which features braised veal shanks.

“Cadenza” is a musical term, the name for a passage that is sung or played by a soloist. A cadenza is often encountered in a concerto, when the orchestra stops playing and the soloist performs alone. The soloist’s performance can be improvised or written, at the composer’s discretion.

43. Doug of the Sir Douglas Quintet with the hit “She’s About a Mover” : SAHM

Doug Sahm was a musician from Texas who founded and led the sixties rock and roll band, the Sir Douglas Quintet. Sahm was somewhat of a child prodigy. He made his radio debut at five years old, and at thirteen was offered a permanent spot at the Grand Ole Opry.

A shoe tree is an adjustable, foot-shaped device that is placed inside a show to preserve its shape. They are often constructed from solid wood that absorb odor and wick away moisture from the shoe’s leather.