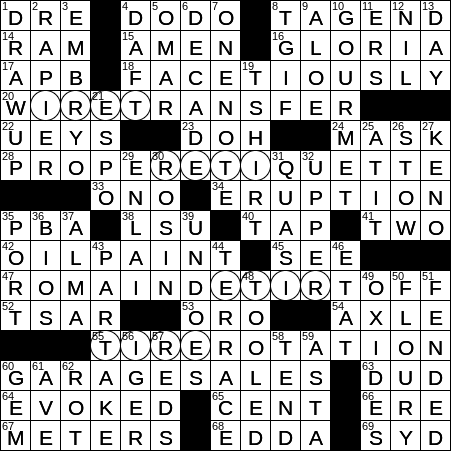 Themed answers include the circled letters TIRE, and those letters have been moved around, ROTATED:

Beats Electronics is a company that was co-founded by rapper Dr. Dre. Apple bought Beats for $3 billion in 2014, which is the largest acquisition in Apple’s history.

4. Birdbrain, or an extinct bird : DODO

Fashion designer Gloria Vanderbilt was an heiress to the fortune of the Vanderbilt family of New York. After her father died, and when she was quite young, Gloria was the subject of a custody battle between her mother and her aunt. Her mother was depicted as living a raucous lifestyle, and so Gloria was made a ward of her Aunt Gertrude. The young girl came to side with her Aunt over the years, to the extent that Gloria cut off her mother completely from the family fortune when she came of age. Famously, CNN anchor Anderson Cooper is Gloria Vanderbilt’s son with her fourth husband Wyatt Emory Cooper.

Louisiana State University in Shreveport is an OSU campus that opened as a two-year community college in 1967, becoming a four-year college in 1972.

The Winter Palace is a magnificent building in St. Petersburg in Russia that was home to the Russian tsars (and tsarinas). Today, the Winter Palace houses the famous Hermitage Museum. I was lucky enough to visit the Palace and museum some years ago, and I have to say that I have rarely been more impressed by a historical building.

The Poetic Edda and Prose Edda are two ancient works that are the source for much of Norse mythology. Both Eddas were written in the 13th century, in Iceland.

A gourmand is someone who takes great pleasure in consuming food and drink, often eating and drinking to excess. The related term “gourmet” refers to someone who has a refined palate.

A day-trader is an investor (of sorts), one who buys securities and sells them on the same day in an attempt to make a quick profit.

Rosin is a solid form of resin derived from plant sources. Rosin is formed into cakes that players of stringed instruments use to rub along the hairs of their bows to help improve sound quality. The rosin increases the degree of friction between the strings and the bow. That same friction-increasing property comes into play when baseball pitchers use rosin to get a better grip on the ball, or when dancers apply rosin to the soles of their shoes.

“Quasi” is a Latin word meaning “as if, as though”. We use the term in English to mean “having a likeness to something”.

Alma College in Alma, Michigan was founded by Michigan Presbyterians in 1886. The school has a Scottish heritage of which it is very proud. Alma has its own Scottish marching band, a Scottish dance troupe and even its own design of tartan.

The name of the element calcium comes from the Latin “calcis” meaning “lime”. “Quicklime” and “burnt lime” are common names for calcium oxide.

Dashiell Hammett was an American author known for his detective fiction. Hammett was the creator of such enduring characters as Sam Spade from “The Maltese Falcon” as well as Nick and Nora Charles from “The Thin Man”. Outside of writing, Hammett was also politically active and serves as the president of a group the Civil Rights Congress (CRC) after WWII. The CRC was deemed to be a Communist front group and was listed as a subversive organization by the US government. At one point, he even served time in jail for contempt of court, after refusing to answer some questions in a trial in which the CRC was involved.