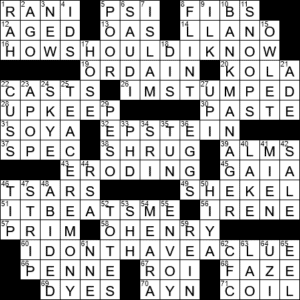 Today’s Theme (according to Bill): No Idea

Themed answers each have the same clue, i.e. “No idea”:

“Llano” is the Spanish word for “plain”.

In 2002, Theo Epstein was hired as General Manager by the Boston Red Sox. Epstein was only 28 years at the time, making him the youngest GM in the history of Major League Baseball.

In ancient Greek religion, Gaia was the Earth goddess, the mother of everything. The Roman equivalent was the goddess Terra.

Our term “strait-laced” is used to describe someone who is “excessively inflexible in matters of conduct”. Note the spelling “strait” (and not “straight”), which in this case means “tight”, and is a reference to the laces of a woman’s corset. A woman with a strait-laced (tightly-laced) corset would have a rigid posture. This usage was extended to the figurative meaning of “rigid in conduct”.

24 Largest of the Inner Hebrides : SKYE

The Isle of Skye is off the northwest coast of Scotland in the Inner Hebrides. It is the second largest island in the country, and has been linked to the mainland by a road bridge since 1995. I’ve never been there, but I hear the views are spectacular.

The dish made from bread soaked in milk with beaten eggs and then fried is usually called French toast in the US, but it also goes by the names German toast and Spanish toast. In France, the dish is known as “pain perdu”, which translates as “lost bread”. This name is a reference to the fact that “lost” or “stale” bread can be reclaimed by dipping it in a mixture of milk and eggs and then frying it.

Cape Town is the legislative capital of South Africa (RSA), and one of three capital cities in the country. Pretoria is the executive capital, and Bloemfontein is the judicial capital.

Comedian Jerry Stiller wrote a 2000 memoir titled “Married to Laughter: A Love Story Featuring Anne Meara”. Stiller married Anne Meara in 1954, and was married to him until her passing in 2015.

An envoy works at an embassy and is a representative of a government, and someone ranking below an ambassador. The name comes from the concept of the envoy being a “messenger” from his or her government. “Envoyer” is the French word for “to send”.

The Louisiana city of Shreveport was founded in 1836 on the west bank of the Red River. The river had been cleared of a 180-mile long log jam by the US Army Corps of Engineers, making the river navigable. The work was led by Captain Henry Miller Shreve, for whom the city was named.