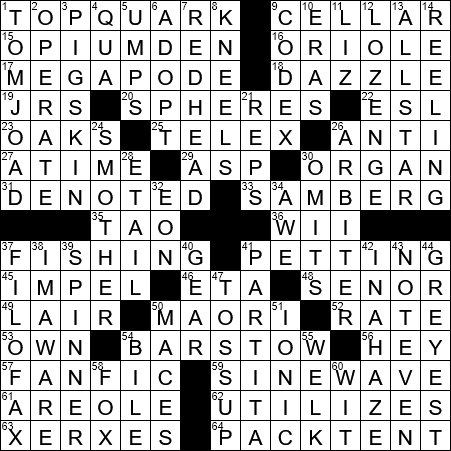 1. Most massive of all known elementary particles : TOP QUARK

Megapodes are Australasian terrestrial birds that resemble large chickens. They have heavy legs and large feet, and indeed the name “megapode” comes from the Latin for “big foot”.

Scarlett O’Hara’s home is the Tara plantation, in Margaret Mitchell’s “Gone with the Wind”. Tara was founded not far from the Georgia city of Jonesboro by Scarlett’s father, Irish immigrant Gerald O’Hara. Gerald won the square mile of land on which Tara was built in an all-night poker game. He named his new abode after the Hill of Tara back in his home country, the ancient seat of the High King of Ireland. Rhett’s rival for the affections of Scarlet is Ashley Wilkes who lives at the nearby Twelve Oaks plantation.

27. Repeated phrase in Ecclesiastes : A TIME

The name of the Chinese character “tao” translates as “path”, but the concept of Tao signifies the true nature of the world.

The Wii mini is smaller version of the incredibly successful Wii gaming console that was released in 2012.

54. California city mentioned after Kingman in the song “Route 66” : BARSTOW

Barstow is a California railroad town that grew with the success of mining operations in the Mojave desert. The city is named for William Barstow Strong, who served as president of the Atchison, Topeka and Santa Fe Railway from 1881 to 1889.

The famous old highway called Route 66 has largely been replaced by modern interstates. It ran from Chicago to Los Angeles, right through the heart of America, and so it was often called the “Main Street of America”. The road gained notoriety because of Nat King Cole’s song “(Get Your Kicks On) Route 66”, and also because of the sixties TV show called “Route 66”.

57. Aficionados’ creations that may infringe on copyrights, for short : FANFIC

Fan fiction (also “fanfic”) is fiction created by fans of an original work that uses characters from that original work.

Areoles are bumps on the side of cacti from which grow clusters of spines. These areoles are one of the features of cacti that distinguish them from other succulent plants.

Xerxes was the eldest son of Darius I of Persia. He succeeded to the throne in 486 BC as Xerxes I, and was later to be known as Xerxes the Great. It was Xerxes who fought against the Spartans in the famous Battle of Thermopylae.

Tom Joad is the protagonist the John Steinbeck’s novel “The Grapes of Wrath”. The role of Joad was played by Henry Fonda in the 1940 film adaptation directed by John Ford. Ford’s movie has a place in history, as it was one of the first 25 movies selected for preservation in the US National Film Registry by the Library of Congress.

“Pigskin” is a slang term for the ball used in American football, even though it’s made from cow leather.

“Qua” is a preposition meaning “in the capacity of”. “Qua” is a form of the Latin word for “who”.

Lucille Ball was at the height of her success while she was married to Desi Arnaz. The couple met in 1940 and not long afterwards eloped. Lucy had several miscarriages before she gave birth to her first child in 1951, just one month before her fortieth birthday. A year and a half later, while “I Love Lucy” was garnering large audiences, she became pregnant with her second child, a pregnancy that was written into the television show’s script. In fact, the day that Lucy gave birth on the show, was the same day that she gave birth in real life.

A codex is an old book, one in the format of a modern book as opposed to its predecessor, which was a scroll. The word “codex” comes from the Latin “caudex” meaning “trunk of a tree”.

Filofax is a brand of personal organizer wallet that was introduced way back in 1921. The name comes from the phrase “file of facts”. I’m very old school, and was using my Filofax long after my colleagues at work had become addicted to their electronic organizers.

A fidget spinner is toy that supposedly can be used for stress relief. Sales of fidget spinners really took off in 2017, although versions of the toy existed back in the early nineties.

The bandleader and accordion player Lawrence Welk hosted “The Lawrence Welk Show” for over thirty years starting in 1951. Lawrence was from Strasburg, North Dakota and grew up in a German-speaking community. His parent were ethnic Germans who emigrated to the US from Odessa, now in Ukraine.

Kits are the young of several mammalian species, including the ferret and the fox. “Kit” is probably a shortened form of “kitten”.

1. Most massive of all known elementary particles : TOP QUARK

27. Repeated phrase in Ecclesiastes : A TIME

37. Where many have gone on vacation : FISHING

53. Take responsibility for : OWN

54. California city mentioned after Kingman in the song “Route 66” : BARSTOW

57. Aficionados’ creations that may infringe on copyrights, for short : FANFIC

21. Counts while working out : REPS