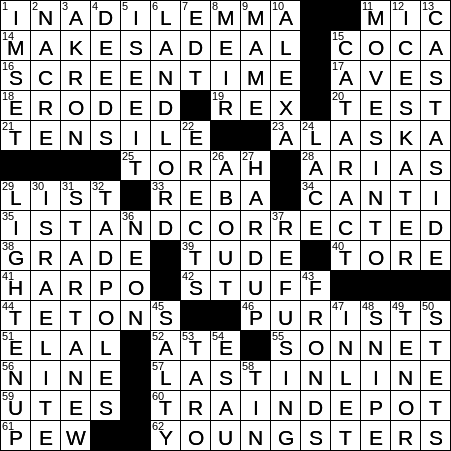 The coca plant is native to South America and is similar in appearance to a blackthorn bush. Coca leaves have been chewed by humans for centuries, perhaps even as far back as 3,000 years ago. Chewing the leaves apparently produces a pleasurable numb sensation in the mouth and a pleasant taste. The most famous alkaloid in the leaf is cocaine, but this wasn’t extracted in its pure form until the mid-1800s. The extracted cocaine was used in a medicines and tonics and other beverages.

In the Jewish tradition, a yeshiva is an educational institution focusing on the study of sacred texts.

Grand Teton National Park (NP) is located just south of Yellowstone NP, and a must-see if you are visiting the latter. The park is named after the tallest peak in the magnificent Teton Range known as Grand Teton. The origins of the name “Teton” is not very clear, although my one story is that it was named by French trappers, as the word “tetons” in French is a slang term meaning “breasts”.

In the English-speaking world, the myth is that cats have nine lives. In Spanish-speaking cultures, cats are said to have seven lives. They are less fortunate in Turkish and Arabic cultures, as the number of lives is limited to six.

The Black Hawk War of 1865-1872 was a series of engagements between Mormon settlers in Utah and several Native American tribes led by Ute chief Antonga Black Hawk.

“Squirt” is a slang term describing a small child. I’m not sure why …

Nacre is the strong iridescent material laid down by some mollusks on the inside of their shells, and it’s also what makes up pearls. The creature lays down nacre as a defensive mechanism, protecting the soft tissue of its body from the rough surface of the outer shell. Similarly, it uses nacre to encapsulate harmful debris or a parasite that penetrates the shell, and that’s how a pearl is formed.

The University of Akron was founded as a small college in 1870 by the Universalist Church, which handed it over to the city of Akron in 1913. The school founded the world’s first College of Polymer Science and Polymer Engineering in 1988, which was a move designed to service the tire industries that are so prevalent in the Akron area.

The state of West Virginia (WVA) was formed during the civil war when the western counties in the old state of Virginia (VA) voted to secede from the Confederate state.

The musical “Mame” opened on Broadway in 1966, with Angela Lansbury in the title role. The musical is based on the 1955 novel “Auntie Mame” written by Patrick Dennis.

Jerry Herman is a composer and lyricist best known for his work on Broadway musicals. Herman’s biggest hits as a composer are “Hello, Dolly!”, “Mame” and “La Cage aux Folles”.

Rockefeller Center is actually made of nineteen buildings in Midtown Manhattan. The site was developed by John D. Rockefeller, who first leased the 22-acre lot back in 1928. The original plan was to build a new opera house for the Metropolitan Opera, but the stock market crash of 1929 led to those plans being canceled. Because of the Great Depression, Rockefeller was forced to fund the whole development project himself, a huge undertaking, but a very successful one.

A cataract is a large waterfall. “Cataract” is of Greek origin and came into English via the Latin “cataracta” meaning waterfall.

Laulau is a Hawaiian dish usually consisting of pork wrapped in taro leaf, and is served with a side of rice or macaroni salad. The main part of the dish is traditionally prepared by baking it in an underground oven called an imu.

Tintypes are photographs made on a thin sheet of metal, rather than the traditional paper. Tintypes were popular at fairs and carnivals in the 1860s and 1870s, as they did not need to the long drying time that was required for images printed on paper. There is actually no tin involved in the process, and the thin metal substrate is made from iron. A such, tintypes are also known as ferrotypes.