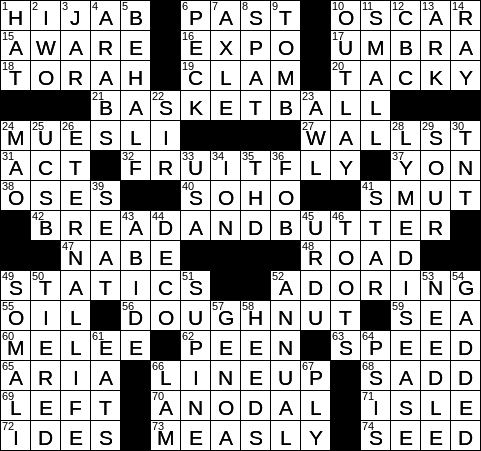 A shadow usually has three distinct parts called the umbra, penumbra and antumbra, with the terms most often used with reference to the shadows cast by celestial bodies. The terms can also be used to describe the levels of darkness in sunspots. The umbra (Latin for “shadow”) is the innermost, darkest part of a shadow. The penumbra (“almost shadow”, from Latin) is a lighter part of a shadow, where part of the light source “leaks” around the body casting the shadow. The antumbra phenomenon is experienced when the object casting the shadow is sufficiently far away from the viewer so that it appears smaller than the light source, with an annular ring around it. When the eye is in the shadow cast by an object that has light passing around it, the eye is in the antumbra.

Paella is sometime referred to as the Spanish national dish, but not by Spaniards. In Spain, paella is regarded as a typical regional dish from Valencia.

Something tacky is in bad taste. The term “tacky” derives from the noun “tackey” that was used in the early 1800s to describe a neglected horse.

Butterball is a brand of poultry products. One of Butterball’s unfortunate claims to fame is that an employee was convicted of felony cruelty to animals in 2012, marking the first felony conviction in the US for cruelty to factory-farmed birds. More convictions followed …

The NASDAQ trading system created in 1971 is the successor to the over-the-counter (OTC) trading system that was common at the time. OTC trading is done directly between two parties without being facilitated by an exchange.

The common fruit fly is used in biological research because it is easy to care for, it breeds very quickly, and lays lots of eggs. The average lifespan of a fruit fly in nature is about a month.

“Hither and yon” is a phrase meaning “from here to over there”.

The suffix “-osis” is found in medical terms. The suffix indicates a disorder in general, with the prefix providing more specificity. Examples are silicosis (a lung disease caused by the inhalation of silica dust), and psychosis (a serious mental illness). The plural of “-osis” is usually “-oses”, but “-osises” is out there as well.

“Nabe” is a familiar term for a neighborhood, or for a local movie theater.

“Fracas”, meaning “noisy quarrel”, is a French word that we absorbed into English. In turn, the French usage evolved from the Italian “fracasso” meaning “uproar, crash”.

70. Of a battery terminal : ANODAL

73. Pathetically tiny, as a sum of money : MEASLY

A seeded player or team in a tournament is one given a preliminary ranking that is used in the initial draw. The intention is that the better competitors do are less likely to meet each other in the early rounds.

I think a bowler hat is usually called a derby here in the US. The bowler was first produced in 1849 in London by hatmakers Thomas and William Bowler, hence the name. The alternative name of “derby” comes from the tradition of wearing bowler hats at the Derby horse race (a major race held annually in England).

In the imperial system of weights and measures, a bushel is a unit of dry volume made up of 4 pecks. In the US system, a bushel is a dry volume of 8 gallons. We have used the term “bushel” to mean “large quantity” since the 14th century.

“CBC” stands for Canadian Broadcasting Corporation, Canada’s national public radio and television broadcaster. In terms of financing and structure, CBC is akin to the BBC in Britain. But as commercial advertising is permitted, it perhaps more akin to RTE, the national broadcasting company in my homeland of Ireland.

The University of California, Santa Barbara (UCSB) is one of the 10 campuses in the UC system. UCSB joined the UC system in 1944, although the school was founded as a teachers’ college in 1891.

Lyme disease is an infectious disease that is becoming more and more common. The condition takes its name from the town of Lyme, Connecticut where several cases were diagnosed in 1975. Humans catch the disease when bitten by infected ticks. If caught early enough, the disease is usually treated successfully with antibiotics.

South Beach is a neighborhood in Miami Beach, Florida that is often referred to by the nickname “SoBe”. SoBe is known for its active and vibrant LGBT community. The title of marvelous 1996 film “The Birdcage” refers to a fictional Birdcage drag nightclub located in South Beach.

Somalia is a country located in the Horn of Africa. Sadly, the nation is noted today for a devastating civil war and for its use as a base for pirates who prey on ships passing through the Indian Ocean along the Somali coast.

Genoa salami is made using preservation techniques that originated in Ancient Rome.