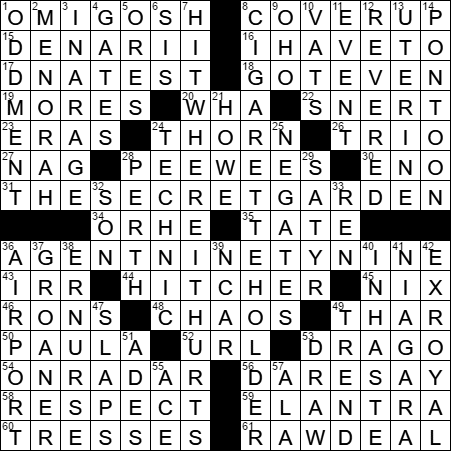 The denarius (plural “denarii”) is a small silver coin that was used in Ancient Rome. Derived from the Latin “deni” meaning “containing ten”, a denarius had the value of ten asses. Today’s “dinar” is a common coin in the Arab world and is named for the old Roman coin. The dinar name was chosen in the days when Arabs were conquering large swathes of the old Roman Empire.

Mores are the accepted customs and practices of a particular group. “Mores” is the plural of the Latin word “mos” which means “custom”.

The World Hockey Association (WHA) was a professional league active from 1972 to 1979. The WHA was a competitor to the National Hockey League (NHL). Four WHA teams (the Edmonton Oilers, New England Whalers, Quebec Nordiques and Winnipeg Jets) joined the NHL when the WHA ceased operations.

In the world of chamber music, a trio often includes a piano. Common forms are:

Brian Eno started out his musical career with Roxy Music. However, Eno’s most oft-played composition (by far!) is Microsoft’s “start-up jingle”, the 6-second sound you hear when the Windows operating system is booting up. Eno might have annoyed the Microsoft folks when he stated on a BBC radio show:

“The Secret Garden” is a children’s novel written by Frances Hodgson Burnett, first published in serial form in 1910, and then as a complete book in 1911. The story is so popular that it has been adapted on more than one occasion, for the stage, big screen, and television and there are also numerous animated productions as well.

In “Hamlet”, William Shakespeare employs the “play-within-a-play” device. Hamlet engages some professional actors to stage “The Murder of Gonzago”. After watching the Player King deliver a moving soliloquy, Hamlet himself makes a speech, including the lines:

What’s Hecuba to him, or he to Hecuba,
That he should weep for her?

The museum known as “the Tate” is actually made up of four separate galleries in England. The original Tate gallery was founded by Sir Henry Tate as the National Gallery of British Art. It is located on Millbank in London, on the site of the old Millbank Prison, and is now called Tate Britain. There is also the Tate Liverpool in the north of England located in an old warehouse, and the Tate St Ives in the west country located in an old gas works. My favorite of the Tate galleries is the Tate Modern which lies on the banks of the Thames in London. It’s a beautiful building, a converted power station that you have to see to believe.

The satirical comedy series called “Get Smart” was the creation of Mel Brooks and Buck Henry, and starred Don Adams as Agent 86, Maxwell Smart. Agent 86 worked for the spy agency CONTROL, alongside the lovely Agent 99. CONTROL’s sworn enemy was the criminal organization called KAOS. Smart’s shoe phone was a hilarious prop used in almost every episode. When Smart dialed the number 117, the shoe converted into a gun. Cool stuff …

Ron Silver has a long career playing relatively small roles on the big screen and television, with roles in well known films like “Mr. Saturday Night”, “Ali”, and “Garbo Talks”. Notably, Silver was the president of Actors’ Equity from 1991 to 2000.

Paula Creamer is a American golfer, winner of the 2010 US Women’s Open. She is a local here where I live in the San Francisco Bay Area. Indeed, as her career took off we were members of the same golf club here in town. That said, I never met the talented Ms. Creamer …

Dolph Lundgren is an actor and martial artist from Sweden. Lundgren’s debut role was a small one, acting as a KGB henchman in the James Bond movie “A View to a Kill”. His big break was starring opposite Sylvester Stallone in “Rocky IV”, playing a scary Russian boxer named Ivan Drago.

The Elantra is a compact car made by Hyundai of South Korea. There was a long-standing dispute between Hyundai and manufacturers Lotus and Mitsubishi. Lotus contended that the Elantra name was too close the Lotus Elan, and Mitsubishi didn’t like the similarity to the Mitsubishi Elante.

The aircraft known as a floatplane differs from a flying boat. The former uses pontoons under the fuselage to provide buoyancy, whereas the latter’s buoyancy comes from the fuselage itself.

Gordie Howe is a retired Canadian hockey player. Regarded as one of the games greatest players, Howe is sometimes referred to as “Mr Hockey”. He is the only hockey player to have competed in the NHL for five decades (from the forties through the eighties), and holds the NHL record for most games and most seasons played.

The Hart Memorial Trophy is awarded annually to the player judged to be most valuable for his team in the NHL. The award is named for Dr. David Hart, a Canadian who donated the original trophy to the league.

“Triage” is the process of prioritizing patients for treatment, especially on a battlefield. The term “triage” is French and means “a sorting”.

Niagara County in the state of New York is home to the magnificent Niagara Falls. The city of Niagara Falls is the largest in the county, but the county seat is Lockport.

A flying ace is an aviator who has shot down a number of enemy planes during combat. The qualifying number of kills seems to vary, but five is common. The first use of “ace” was during WWI when the French newspapers dubbed pilot Adolphe Pegoud “l’as” (French for “the ace”) when he shot down his fifth German plane.

7. Find the weakness of : HIT WHERE IT HURTS

24. Lego line that may include gears and motors : TECHNIC

37. It usually doesn’t get a laugh : GROANER