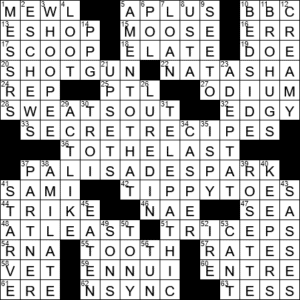 13 Not a brick-and-mortar operation : E-SHOP

“E-tail” is the term used these days for online shopping (coming from “retail”). E-tail is often compared to regular shopping in the “real world” by juxtaposing it with a “brick-and-mortar” store.

“The Rocky & Bullwinkle Show” is a cartoon series that originally aired on television in the late fifties and early sixties. The title characters are a moose (Bullwinkle) and a squirrel (Rocky). Rocky the Flying Squirrel is formally known as Rocket J. Squirrel, Bullwinkle’s full name is Bullwinkle J. Moose.

“The PTL Club” was a daily television show hosted by televangelists Jim and Tammy Faye Bakker. PTL is short for both “Praise the Lord” and “People that Love”. The show ended its run of over ten years in 1987 when it was revealed that Jim Bakker was involved in financial and sexual scandals. Bakker served 5 years in jail as part of an 18-year sentence.

Odium is a strong dislike or aversion. The term is Latin in origin and relates to the Latin word “odi” meaning “I hate”.

The exact formula for Coca-Cola is a trade secret. The secret recipe is locked in a vault. That vault is on public display in the World of Coca-Cola museum in Atlanta, Georgia.

“Palisades Park” is a 1962 song recorded by Freddy Cannon. It is a rock and roll number that pays tribute to New Jersey’s Palisades Amusement Park that was located just across the Hudson River from New York City.

Someone is described as Nordic if he or she is a native of Norway, Denmark, Sweden, Finland or Iceland.

Inverness is in effect the capital city of the Scottish Highlands. It is the most northerly city in the whole of the United Kingdom. Inverness sits at the mouth of the River Ness, which flows from the famous Loch Ness.

The White Sea is an inlet of the Barents Sea in Russia. The major port of Archangel (“Archangelsk”) is located on the White Sea.

“That will be ere the set of sun” is a line from William Shakespeare’s “Macbeth”. It is a line that is spoken by one of the three witches.

30 Half-Betazoid aboard the Enterprise : TROI