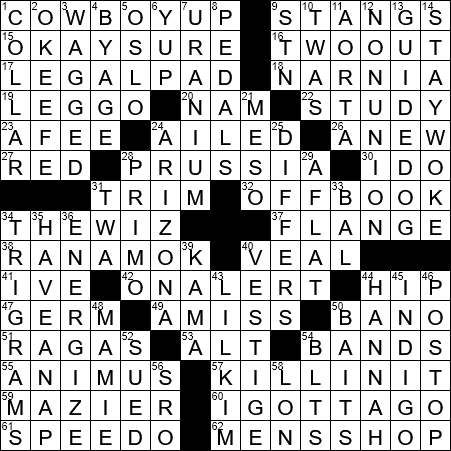 18 Country by the River Shribble : NARNIA

“Hamburger Hill” is a 1987 film set during the Vietnam War. The movie was inspired by the real-life Battle of Hamburger Hill, an engagement that many believe started a shift in support for the war by the US public.

Something provided “gratis” is supplied free of charge. “Gratis” is a Latin term, a contraction of “gratiis” meaning “for thanks”.

That would be rare meat.

Germany first became a country of her own in 1871 when the Princes of the various independent German states met at Versailles outside Paris to proclaim Wilhelm of Prussia as the Emperor of the German Empire. The man behind this historic development was Wilhelm’s Ministerpräsident, Otto von Bismarck. Von Bismarck was a powerful figure in Prussia and indeed on the world stage, and earning him the nickname “Iron Chancellor”.

Veal is the meat from calves, whereas beef is the meat from mature cattle. Most veal comes from male calves, as the females can be more valuable as producers of cow’s milk. Historically, veal production has been one of the most controversial practices in animal farming. Some farmers restricted the movement of veal calves by confining them in crates for the whole of their short lives in order to produce paler and more tender meat.

54 Boston and Chicago, but not San Francisco : BANDS

Boston is a rock band from … Boston. Boston’s biggest hit was “Amanda”, released in 1986.

The rock band called Chicago was formed in … Chicago. The band’s biggest hits are “If You Leave Me Now” (1976) and “Hard to Say I’m Sorry” (1982). The band’s lineup has changed a lot over the years. The most tragic reason for a change was in 1978 when Terry Kath, one of the band’s founding members, died from an accidentally self-inflicted gun wound. Kath enjoyed playing with guns and as a joke held a pistol with an empty magazine to his temple and pulled the trigger. A round in the chamber killed him instantly.

Michael O’Keefe played young Danny Noonan in the film “Caddyshack” (I’m not a big fan of that movie). He also appeared in the George Clooney film “Michael Clayton”. O’Keefe was married for several years to singer Bonnie Raitt.

Here are some lines spoken by the title character in William Shakespeare’s “Othello”:

My story being done,
She gave me for my pains a world of sighs;
She swore, in faith ’twas strange, ’twas passing strange;
‘Twas pitiful. ’twas wondrous pitiful,
She wish’d she had not heard it, yet she wish’d
That heaven had made her such a man

The prefix “meso-” means “middle, intermediate” and comes from the Greel “mesos” meaning “middle”. Example of the use of the prefix are in the terms “Mesoamerica” and “Mesozoic”.

The Arizona Beverage Company has been making flavored iced tea drinks since 1992. Paradoxically, the company is based in New York State.

A trigram is a group of three letters or symbols.

Kama is the Hindu god of love. He is portrayed as a youth bearing a bow and arrows, much like Eros and Cupid. Kama lends his name to the “Kama Sutra”.

“Lil’ Kim” is the stage name of rap artist Kimberly Denise Jones from Brooklyn, New York. Lil’ Kim spent a year in jail in 2005 for lying to a jury in a case about a shooting.

“The Notorious B.I.G.” was the stage name of rap star Christopher Wallace, who also went by the names “Biggie Smalls” and “Biggie”. While at the height of his fame Wallace was killed in a drive-by shooting in Los Angeles, a murder case that has never been solved. The 2009 movie “Notorious” is about Wallace’s life and stars fellow rap artist Jamal Woolard (aka Gravy) in the title role.

Harry and Bess Truman met when they were very young children, at Sunday school. They were friends right through high school and became engaged in 1918 just before Harry went off to France during WWI, marrying the next year. Bess Truman never really took to the Washington scene when she became First Lady and stayed out of the limelight as much as she could. Perhaps that contributed to her longevity. Mrs. Truman lived to the age of 97, making her the longest living First Lady in US history.

Mamie Eisenhower was surely one of the most charming of all the First Ladies of the United States. Ms. Eisenhower suffered from an inner ear complaint called Ménière’s disease which caused her to lose her balance quite often. Because she was unsteady on her feet there were unfounded rumors floating around Washington that Ms. Eisenhower had a drinking problem. People can be very unkind …

Jacqueline Kennedy Onassis was born into a privileged family, the daughter of Wall Street stockbroker John Vernou Bouvier III. Ms. Bouvier moved in the same social circles as the Kennedy clan, and first met the then-US Representative John Kennedy at a dinner party hosted by mutual friends. Years later, after she saw her husband assassinated and then her brother-in-law (Bobby Kennedy) suffer the same fate, Jackie declared that she feared for the life of her children as they bore the Kennedy name. She left the country, eventually meeting and marrying Aristotle Onassis. Reportedly she was very satisfied that the Greek shipping magnate was able to provide privacy and security for her children.