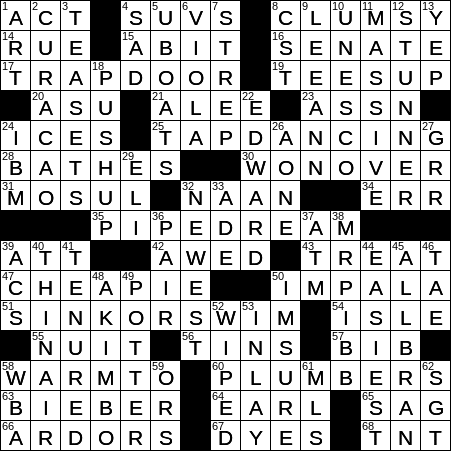 Themed answers start with an item associated with PLUMBERS:

The US Senate comprises 100 senators, with each of the fifty states being represented by two popularly elected senators. US senators were appointed by their state legislators from 1798 until 1913, until the Seventeenth Amendment called for popular elections.

In the game of golf, a “tee” is a wooden or plastic peg on which one can place a ball when “teeing off”. Also, the “teeing ground” (sometimes “tee” or “tee box”) is the area at the beginning of the hole from which the first stroke is taken, from where one tees off.

Savion Glover is a professional tap dancer and actor from Newark, New Jersey.

Maurice and Gregory Hines are a pair of brothers who are famous for starting out their show business careers as tap dancers. Maurice made one film appearance, in 1984’s “The Cotton Club”. The younger brother, Gregory, has been more visible in front of the camera. Gregory was one of the leads in the movie “The Cotton Club”, and hosted “The Gregory Hines Show” on television.

In common parlance, a “pipe dream” is a vain hope for something that is unlikely to take place. The original pipe dreams were visions that were experienced after taking opiates.

When we run a tab at a bar, we are running a “tabulation”, a listing of what we owe. Such a use of “tab” is American slang that originated in the 1880s.

A cheapie is something that is cheap, and particularly applies to a low-budget movie.

56 Array in a British pantry : TINS

60 ’70s covert White House intelligence group … and, in a more conventional sense, a hint to the starts of the answers to starred clues : PLUMBERS

G. Gordon Liddy serving in various positions in the Nixon administration. In 1971, Liddy was moved into a unit tasked with managing leaks of information from the White House. As the group was working on “leaks”, it was known as the White House “Plumbers” unit. Over time, the Plumbers moved from plugging leaks to actively plotting to embarrass the Democratic opposition during President Nixon’s re-election campaign. Ultimately, Liddy led the group of five men who famously broke into the headquarters of the Democratic National Campaign in the Watergate Complex. Liddy was sentenced to a 20-year prison term, although he only served four and half years following a commutation to his sentence by President Jimmy Carter. Years later, Liddy became quite successful as a nationally syndicated talk show host.

In the incredibly successful period drama “Downton Abbey”, the patriarch of the family living at Downton is Robert Crawley, the Earl of Grantham or Lord Grantham. The character is played by Hugh Bonneville. Lord Grantham married American Cora Levinson (played by Elizabeth McGovern). Lord and Lady Grantham had three daughters, and no son. The lack of a male heir implied that the Grantham estate would pass to a male cousin, and out of the immediate family. The Grantham daughters are Lady Mary (played by Michelle Dockery), Lady Edith (played by Laura Carmichael) and Lady Sybil (played by Jessica Brown Findlay). Lady Sybil had the audacity to marry the family chauffeur, who was an Irish nationalist. The shame of it all …

“TNT” stands for Turner Network Television. The TNT cable channel made a big splash in the eighties when it started to broadcast old MGM movies that had been “colorized”, not something that was a big hit with the public. In recent years, the TNT programming lineup is touted with the tagline “We Know Drama”, and includes shows like “Judging Amy”, “ER” and “Cold Case”.

2 Liqueur named for an island : CURACAO

The liqueur known as Curaçao comes from the island of Curaçao in the southern Caribbean. The liqueur is usually given artificial coloring to make it suitable for use in exotic cocktails. The common colors used are blue and orange.

6 It’s tuned an octave higher than a cello : VIOLA

The antibiotic called penicillin was discovered by Alexander Fleming in 1928. He noted that a blue-green mold growing in a Petri dish produced a substance that inhibited the growth of Staphylococcus bacteria, which was growing on the same substrate. The mold was Penicillium notatum, and Fleming named the antibiotic penicillin after the mold.

The United Nations Educational, Scientific and Cultural Organization is better known by the acronym “UNESCO”. UNESCO’s mission is help build peace in the world using programs focused on education, the sciences, culture, communication and information. The organization’s work is aimed in particular at Africa, and gender equalization. UNESCO also administers a World Heritage Site program that designates and helps conserve sites of outstanding cultural or natural importance to humanity across the world.

The soft drink on the market today called Pibb Xtra used to be known as Mr Pibb, and before that was called Peppo. Peppo was introduced in 1972 as a direct competitor to Dr Pepper.

“All-Bran” is a breakfast cereal that has been produced by Kellogg’s since 1916. Kellogg’s Bran Flakes had been introduced a year earlier.

48 With hands on hips : AKIMBO

49 Wizard with a scar : POTTER

Author J. K.Rowling’s famous character Harry Potter has a lightning-shaped scar on his forehead, the result of an attack on his life as a baby by the dark wizard Lord Voldemort.

D.C. United is a professional soccer team based in the nation’s capital. The team competes in Major League Soccer (MLS) and plays home games at the Robert F. Kennedy Memorial Stadium.

The rank of lieutenant (lt.) is superior to the rank of sergeant (sgt.).