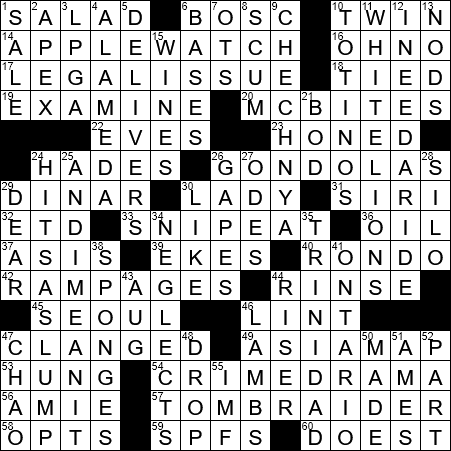 6. Fruit named for a horticulturist : BOSC

Target Field is a baseball park in Minneapolis, Minnesota that has been home to the Minnesota Twins since the stadium opening in 2010. Target Corporation, which is headquartered in Minneapolis, paid an undisclosed sum to get the naming rights of the park.

The Apple Watch was announced in 2014 and started shipping in 2015. The device works as an extension to a user’s smartphone, although it also has capabilities of its own. I’m not a big fan of smartwatches; I don’t really see the point …

McDonald’s offered Chicken McBites in the US North American market in the early 2010s. McBites were made from small pieces of chicken breast.

The dinar is the official currency in many countries, such as Iraq, Tunisia and Serbia. The gold dinar dates back to the early days of Islam, with the name deriving from the Roman currency called “denarius” meaning “ten times” (as it was originally a coin worth ten asses).

The nation that we know as Jordan takes its name from the River Jordan that forms part of the country’s border with Israel and Palestine to the west. Jordan achieved independence in 1946 after the UN approved the end of the British Transjordan Mandate. The Kingdom of Transjordan changed its name to Jordan in 1948.

“Lady and the Tramp” is a classic animated feature from Walt Disney, released in 1955. The title characters are a female American cocker spaniel and a male stray mutt. Who can forget the scene where the Tramp and Lady are “on a date”, and together eat that one strand of spaghetti? So cute!

31. Unpaid assistant in many offices : SIRI

“Rage Over a Lost Penny, Vented in a Caprice” is a piano rondo by Ludwig Van Beethoven. The piece was originally called Rondo Alla in Grecia Casa Capriccio by the composer, but somebody else wrote the whimsical title on the original autograph manuscript. The latter title is the name under which the work is best known.

The Han River that runs through the South Korean capital of Seoul used to be known as the Hanshui, a name that is still used at times today.

57. Game whose heroine was played by Angelina Jolie in a 2001 film : TOMB RAIDER

“Alameda” is Spanish for “a place full of poplars”. There are number of locations in the US and elsewhere with the name “Alameda”, including the county of Alameda, California where I am right now, writing this post. Alameda County is also home to the city of Alameda located on Alameda Island.

The Golden State Warriors are our local NBA franchise out here in the San Francisco Bay Area and are based in Oakland, California. The team was founded in 1946 as the Philadelphia Warriors, becoming the San Francisco Warriors when they moved to City by the Bay in 1962. They changed named again (to Golden State) when they relocated to Oakland in 1971. The statewide name reflected the fact that the team played some of their 1971-72 season games in San Diego, and as such were “California’s” team.

Chechnya is a federal subject of Russia located in the North Caucasus in the very southwest of the country. The capital of Chechnya is Grozny. In the days of the USSR, Chechnya was part of the Chechen-Ingush Autonomous Soviet Socialist Republic (ASSR). The former ASSR was subsequently divided into the Chechen Republic and the Republic of Ingushetia. The Chechen Republic declared independence from the Russian Federation, which resulted in the First Chechen War, fought from 1994 to 1996. Boris Yeltsin’s government in Moscow signed a peace treaty ending the war and ceding autonomy to Chechnya. However, Chechnya-based Islamic fighters invaded Dagestan in 1999, at which point Russian troops entered Chechnya again, starting the Second Chechen War. The second conflict raged until 2009, when the Russians withdrew many of their troops having severely disabled the capabilities of the Chechen separatists.

The Totino’s brand of frozen pizza was founded by Rose and Jim Totino, a married couple who had been running a take-out pizzeria in Minneapolis since 1951.

A small percentage of lions are white in color due to a rare genetic mutation. Starting in the 1970s, the rare white lions were removed from the wild and sent to zoos and circuses for breeding. There hasn’t been a spotting of a wild white lion since 1994.

35. Half a two-island country : TRINIDAD

The city of London, Ontario lies about halfway between Detroit, Michigan and Toronto, Ontario. Just like the city’s better known namesake in England, Canada’s London is located on the Thames River.

Gaius Octavius Thurinus (often called Octavian) was the adopted son of Gaius Julius Caesar. After Julius Caesar was assassinated, Octavian came to power in Rome and teamed up with Mark Antony and Marcus Aemilius Lepidus in what was called the Second Triumvirate. When the triumvirate fell apart, especially after Antony’s defeat at Actium, Octavian became more powerful within the Roman Republic. Several years later he wrested sufficient power from the Roman Senate to end the Republic and begin the Roman Empire. As the first Emperor of Rome, Octavian was given the name Caesar Augustus. The month of August, originally called “Sextilis” in Latin, was renamed in honor of Augustus.

When President George W. Bush appointed Elaine Chao as Secretary of Labor, he made a bit of history as Chao became the first Chinese American in history to hold a cabinet post. It turned out that Chao became the only cabinet member to hold her post for President Bush’s full eight years in office. In 1993, Chao married Mitch McConnell, the Republican Leader of the US Senate.

The “Iowa State Daily” is a newspaper serving the students of Iowa State University in the city of Ames. The publication was founded way back in 1890 as the “I.A.C. Student”. “I.A.C.” stood for “Iowa Agricultural College”, the name of the university at that time.

The International Monetary Fund (IMF) was established at the end of 1945 with 29 major economies supporting and funding an effort to stabilize economies across the globe after WWII. Headquartered in Washington, D.C., today the IMF has 187 member countries.