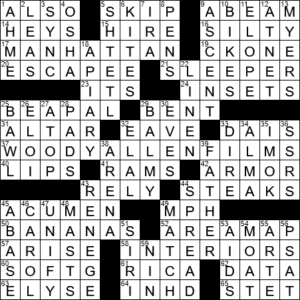 Themed answers are each the title of a WOODY ALLEN FILM:

The track and field sport sometimes called the “hop, skip and jump” is more correctly termed “triple jump”. The triple jump dates back as an event to the ancient Olympic Games. When the modern Olympics were introduced in 1896, the triple jump consisted of two hops on the same foot followed by a jump. Today’s triple jump consists of a hop, a bound and then a jump.

Today, we mostly think of silt as a deposit of sediment in a river. Back in the mid-1400s, silt was sediment deposited by seawater. It is thought that the word “silt” is related to “salt”, as found in seawater.

The island we know as Manhattan was inhabited by the Lenape Indians when the first Europeans explorers arrived in the area. According to the logbook of one of the officers on explorer Henry Hudson’s yacht, the island was called “Manna-hata” in the local language, from which the modern name derives.

The Woody Allen movie “Manhattan” was released in 1979. The music of George Gershwin features prominently, which isn’t surprising as Woody Allen got the inspiration for the film from Gershwin’s compositions. The movie opens with a montage of images of Manhattan shown above Gershwin’s beautiful “Rhapsody in Blue”.

Woody Allen’s 1973 movie “Sleeper” is a sci-fi piece in which Allen plays an average man cryogenically frozen and defrosted 200 years into the future. This is one of those vehicles for Woody Allen playing opposite Diane Keaton. I tried watching it a couple of times, but failed miserably to sit through it. The film’s storyline plays on several works of science-fiction, including “The Sleeper Awakes” by H. G. Wells and “Nineteen Eighty-Four” by George Orwell.

37 What the answers to starred clues are (their creator turned 85 this month) : WOODY ALLEN FILMS

Woody Allen’s 1971 comedy “Bananas” features Allen in the lead role. It’s about an American blue-collar guy who heads to a Cuba-style republic in the midst of a revolution, all to impress a girl (played by Louise Lasser). The “Bananas” is meant to denote the craziness of the Allen character, but it’s also a pun on the term “Banana Republic”.

Woody Allen’s film “Interiors” is a drama released in 1978. It tells the story of three sisters, played by Diane Keaton, Kristin Griffith and Mary Beth Hurt, who have to deal with the separation of their parents.

5 “Fiddler on the Roof” village : SHTETL

The Yiddish word for “town” is “shtot”, and so “shtetl” is the diminutive form meaning “small town”. The fictional shtetl featured in the musical in “Fiddler on the Roof” is called Anatevka, which is also the title of my favorite song from the show.

12 Where many tennis winners are hit : AT NET

Our modern sport of tennis evolved from the much older racquet sport known as “real tennis”. Originally just called “tennis”, the older game was labeled “real tennis” when the modern version began to hold sway. Real tennis is played in a closed court, with the ball frequently bounced off the walls.