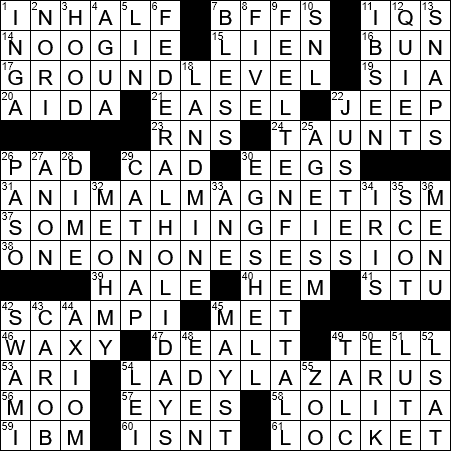 A “noogie” is that childish move in which someone rubs his (and it’s always a guy!) knuckles into a person’s head to create a little soreness.

“The Joy of Painting” is a long-running instructional TV show that was hosted by painter Bob Ross from 1983 until 1994 (Ross passed away in 1995). The show was a follow-on to the equally successful show “The Magic of Oil Painting” that was hosted by artist Bill Alexander, and which ran from 1974 until 1982. In both series, the hosts demonstrated various artistic techniques while completing a painting in each episode.

One might find a registered nurse (RN) or a medical doctor (MD) in an emergency room (ER).

“Hale” is an adjective meaning “healthy”. Both the words “hale” and “healthy” derive from the the Old English “hal” meaning healthy.

“Lady Lazarus” is a poem by writer Sylvia Plath that was first published in 1965, two years after her suicide. That said, Plath did recite a version of the poem in 1962 for a recording made by the BBC.

Sylvia Plath was a poet from Boston, Massachusetts who lived much of her life in the UK where she married fellow poet Ted Hughes. The couple had a tumultuous relationship, and Plath had a long battle with depression. She lost that battle in 1963, when she committed suicide at the age of 30.

The cattle are lowing, mooing.

Maya Lin is a Chinese American born in Athens, Ohio, and is an artist and architect. Her most famous work is the moving Vietnam Veterans Memorial in Washington, D.C. Lin was only 21-years-old when she won a public design competition in 1981 to create the memorial. Although her design is very fitting, sadly Lin was not a popular choice for the work given her Asian heritage. As she said herself, she probably would not have been picked had the competition been judged with the knowledge of who was behind each submission.

6. America has ten of them : FEDERAL HOLIDAYS

The US Congress created the first federal holidays in 1870, but only designated four such holidays:

A land mine is an explosive device that is usually buried just under the surface of the surface of the ground. The term “land mine” has its roots in the old practice of military “mining”, in which tunnels were dug under an enemy, and deliberately collapsed. Those military mines developed over the years until it was more common to fill the mine with explosives in order to create even greater destruction.

“Mot juste” is a French phrase that we use in English to mean “the right word at the right time”. The literal translation is “just word”, and the French tend to use the phrase in the expression “chercher le mot juste” meaning “to search for the right word”.

Annie Lennox is a Scottish singer who rose to fame as half of the duo Eurythmics with David A. Stewart in the 1980s. Lennox went solo in 1992, and has been riding high ever since.

The carob is a tree or shrub in the pea family that is mainly grown for its seed pods. The carob seeds are dried or roasted, and when powdered or chipped make a good substitute for chocolate.

Here is Sonnet 73 by William Shakespeare:

That time of year thou mayst in me behold
When yellow leaves, or none, or few, do hang
Upon those boughs which shake against the cold,
Bare ruined choirs, where late the sweet birds sang.
In me thou see’st the twilight of such day
As after sunset fadeth in the west;
Which by and by black night doth take away,
Death’s second self, that seals up all in rest.
In me thou see’st the glowing of such fire,
That on the ashes of his youth doth lie,
As the deathbed whereon it must expire,
Consumed with that which it was nourished by.
This thou perceiv’st, which makes thy love more strong,
To love that well which thou must leave ere long.

Erik Karlsson is a professional hockey player from Sweden who debuted with the NHL in 2009 playing for the Ottawa Senators. He was made captain of the Senators in 2014, and was traded to the San Jose Sharks in 2018.