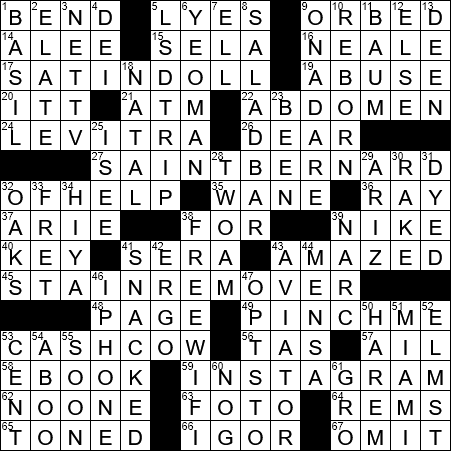 Themed answers each start with an “anaGRAM” of “INSTA”:

14 On the protected side : ALEE

“Satin Doll” is a jazz standard that was co-written and recorded by Duke Ellington. Johnny Mercer wrote lyrics to the song, but after it had already become an instrumental hit in 1953. Ellington usually closed his concerts with a rendition of “Satin Doll”.

“Viagra” is a trade name for the drug sildenafil citrate that is used primarily to treat erectile dysfunction. The drug was developed in the UK by Pfizer as a treatment for high blood pressure and angina, but the clinical trials showed that it induced penile erections. A decision was made to change the intended market of the drug and in 1998 it became the first orally-taken medication approved by the FDA for erectile dysfunction.

The St. Bernard dog originated in the Italian and Swiss alps, and was indeed specially bred for rescue. The breed dates back at least to the early 1700s when the dogs worked from the traveler’s hospice at the St. Bernard Pass in the Alps between Italy and Switzerland. The breed took its name from this famously treacherous route through the mountains. A group of St. Bernards is known as a floof. Yep, a floof …

A mote is a speck of dust.

Arie Luyendyk is a racing driver from the Netherlands, winner of the Indianapolis 500 on two occasions. Luyendyk’s son, also called Arie, is following in his father’s footsteps and is also an auto racer.

Nike was founded in 1964 in Eugene, Oregon by entrepreneur Phil Knight and track-and-field coach Bill Bowerman as Blue Ribbon Sports (BRS). BRS started out by distributing athletic shoes made in Japan. The company started making its own shoes in 1971 and changed its name to Nike, after the Greek goddess of victory.

Air Jordan is Nike brand of shoe (and other apparel), endorsed by NBA great Michael Jordan. The silhouette of a basketball player that features on Air Jordans is known as the “jumpman” logo.

US Senate Pages are 16 and 17-year-old high-school juniors who get to watch the political action up close in Washington, while doing the “gofer” jobs needed by the Senators and permanent staff. There are 30 Pages during the school year, 16 appointed by the majority party, and 14 by the minority. The list of former Senate Pages includes Amy Carter (daughter of the President), Chris Dodd (who became a Senator) and Spiro Agnew (who made it to the Vice President’s Office).

The Italian term “pesto” applies to anything made by pounding. What we tend to know as pesto sauce is more properly called “pesto alla genovese”, i.e. pesto from Genoa in northern Italy. I love, love pesto sauce …

Hulu.com is a website providing streaming video of full television shows. It is a joint venture of NBC and Disney, and so features a lot of their content.

Opus Dei is a Roman Catholic institution that was founded in Spain in 1928, and officially approved by the church in 1950. In 2010, Opus Dei had over 90,000 members, mostly lay people. The institution’s mission is to promote certain aspects of the Roman Catholic doctrine. Opus Dei was portrayed as a sinister organization by Dan Brown in his novel “The Da Vinci Code”.

L. Frank Baum (the “L” is for Lyman) is famous for writing “The Wonderful Wizard of Oz”. Writing early in the 20th century, Baum actually described in his books things that had yet to be invented, like television, laptop computers and wireless telephones.

Selfie sticks; oh, how I hate selfie sticks. A walk down the Strip in Vegas is an enlightening exercise in what’s wrong with contemporary photography …

The land ruled by a sultan is known as a sultanate. In the West, the feminine forms of “sultan” are “sultana” and “sultanah”. The adjectival form is “sultanic”.

Scotts Miracle-Gro Company was founded in 1868 by one Orlando Scott, and initially sold seed to the agricultural industry. In the early 1900s, Scotts started to sell to homeowners, and mainly supplied lawn seed. The company merged with the gardening company Miracle-Gro in 1955, and then with TruGreen in 2016.