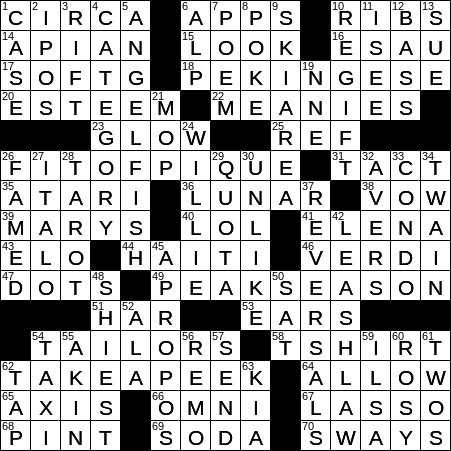 Themed answers include a “peak” sound:

6 Words With Friends and such : APPS

The opening letter in the word “general” is a soft letter G (gee).

St. Mary’s University is a Roman Catholic school in San Antonio, Texas. It was founded by the Society of Mary in 1852, making St. Mary’s the oldest Catholic university in the American Southwest.

Port-au-Prince is the capital of Haiti. The city was hit by a devastating earthquake in January of 2010. The official government estimate of the death toll stands at 230,000 people, with many bodies never recovered.

There several species of fish known as angelfish. Each is brightly colored with a laterally compressed body.

8 Sack holding a pig, in an old idiom : POKE

30 “A tradition __ any other”: trademarked catchphrase for The Masters : UNLIKE

I do love a little math on a Wednesday …

The large, central and dominant root grown by many plants is known as the taproot. In plants like the carrot and parsnip, the taproot is used by the plant as a storage organ. And, we humans (and rabbits!) like to eat that storage organ.

The Kia Sedona is a minivan that is also sold as the Kia Carnival.