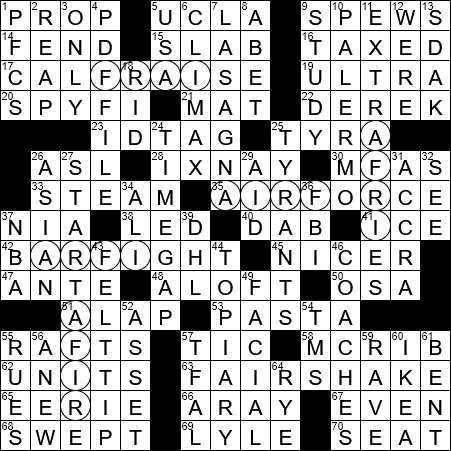 Today’s themed answers each contained a string of circled letters. Those letters are FAIR, but they’ve been mixed up, SHAKEN:

The UCLA Bruins’ mascots are Joe and Josephine Bruin, characters that have evolved over the years. There used to be “mean” Bruin mascots but they weren’t very popular with the fans, so now there are only “happy” Bruin mascots at the games.

The character Austin Powers was created by the actor who plays him, namely Mike Myers. Apparently Myers came up with the idea for Powers while listening to the Burt Bacharach song “The Look of Love”.

The commonly quoted line “As ye sow, so shall ye reap” is not actually a direct quote from the Bible, although the sentiment is expressed there at least twice. In the Book of Job is the line “They that plow iniquity, and sow wickedness, reap the same”. In the Epistle of Paul to the Galatians is the line “Be not deceived; God is not mocked: for whatsoever a man soweth, that shall he also reap”.

5. Country with an eagle on its Great Seal: Abbr. : USA

The Great Seal of the United States is a device used to authenticate some US federal documents. The obverse (front) of the Great Seal is used as the coat of arms of the US, a design that can seen on all American passports.

Palermo is the capital of the Italian autonomous region of Sicily. Palermo was founded by the Phoenicians over 2700 years ago.

Back in the sixties, Larry Hillblom was making pocket money as a Berkeley law student by doing courier runs between San Francisco and Los Angeles. After law school, Hillblom decided to parlay his experience into his own business and set up a courier service flying bills of lading ahead of freight from San Francisco to Honolulu. He brought in two buddies, Adrian Dalsey and Robert Lynn, as partners and the three were soon hopping on and off commercial flights and gradually making more and more money. And DHL was born … D (for Dalsey) H (for Hillblom) L (for Lynn).

Sharpie is a brand of marker pen that has been on sale since 1964.

Topiary is the practice of training and clipping perennial plants into clearly defined shapes.

33. Something to blow off or let off : STEAM

45. More likely to be on Santa’s good list : NICER

63. Equitable treatment … and what’s literally found in each set of circles : FAIR SHAKE

5. Country with an eagle on its Great Seal: Abbr. : USA

27. Get the wood-burning stove going : START A FIRE