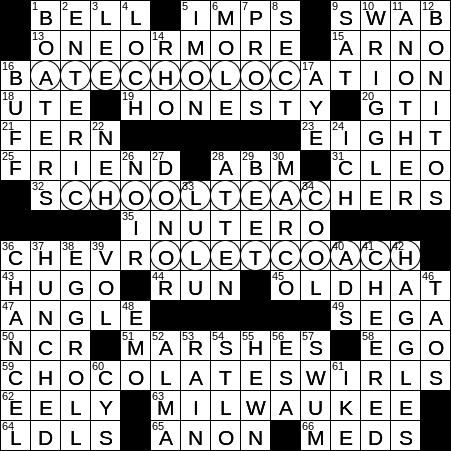 Themed answers include the letters CHOCOLATE. Those letters are circled in the grid, and are also changed in order, are in a SWIRL:

The Liberty Bell was commissioned in 1752 and was installed in the steeple of the Pennsylvania State House, now known as Independence Hall in Philadelphia. The bell bears the inscription “Proclaim LIBERTY throughout the land unto all the inhabitants thereof”, a quotation from the Book of Leviticus in the Bible. Famously, the bell cracked when it was first rung in Philadelphia after arriving from the foundry where it was made in London, England. The bell’s fame originated with a short story by George Lippard published in 1847 that gave a fictional account of an old bell-ringer ringing it on July 4, 1776 upon hearing that the Second Continental Congress had voted for independence. That ringing of the bell never actually happened, even though the account was constantly presented as fact in school texts around the country for generations.

Echolocation when used by animals is known as biosonar. The best-known example of an animal using biosonar is probably the bat, although not all species of bat use sounds to locate objects.

The Volkswagen Rabbit is a small, front-wheel drive car that is sold as the Volkswagen Golf outside of North America. There is a very popular GTI version of the Golf that was introduced in 1976. The initialism “GTI” stands for Grand Tourer Injection.

One of the positive outcomes of President Reagan’s Strategic Defense Initiative (SDI, aka “Star Wars”) was a change in US defense strategy. The new approach was to use missiles to destroy incoming hostile weapons, rather than using missiles to destroy the nation attacking the country. The former doctrine of Mutually Assured Destruction went by the apt acronym of MAD …

Cleo Laine is a jazz singer from England who is noted for her remarkable range of nearly four octaves. Laine is the only female performer to have received Grammy nominations in each of the classical, jazz and popular music categories. My favorite of her recordings is “He Was Beautiful”, which is also known as “Cavatina” and is a version of the theme from the film “The Deer Hunter”.

“In utero” is a Latin term meaning “in the uterus”. The Latin “uterus” (plural “uteri”) translates as both “womb” and “belly”. The Latin word was derived from the Greek “hystera” that also means “womb”, which gives us the words “hysterectomy”, and “hysterical”.

The Hugo Awards are presented annually for excellence in science fiction and fantasy writing. The awards are named for Hugo Gernsback, founder of the sci-fi magazine “Amazing Stories”.

“Phantasy Star” is a series of video games published by Sega starting in 1987. That’s all I know …

NCR is an American company that has been in business since 1884, and was originally called the National Cash Register Company. The company has done well in a market where new technologies seem to be constantly disrupting the status quo.

The Harley-Davidson motorcycle company was started up in the very early 1900s by two childhood friends, William Harley and Arthur Davidson, . Their first design was in effect an engine hooked up to a pedal bicycle, but the 116 cc cylinder capacity simply couldn’t generate enough power to get up the hills of their native city of Milwaukee. The pair came up with a redesigned model that had a cylinder capacity of 405 cc, which the partners built in a shed at the back of Davidson’s house. In 1906, the partners built their first factory, located where the company’s headquarters is to this day, on Juneau Avenue in Milwaukee, Wisconsin. Famously, Harley motorcycles are nicknamed “hogs”.

“Anon” originally meant “at once” and evolved into today’s meaning of “soon” apparently just because the word was misused over time.

Maurice Chevalier was an actor and singer from Paris who had a remarkably successful career in Hollywood, particularly in the late fifties and early sixties. Chevalier’s most memorable roles were perhaps in “Gigi” (1958), “Can-Can” (1960) and “Fanny” (1961).

The Greek word for “intestine” is “enteron”.

“The Wind in the Willows” is a classic children’s novel first published in 1908. Featured in the story are characters such as Mole, Ratty, Mr. Toad and Mr. Badger. The story’s author was Kenneth Grahame, a man who held the exalted position of Secretary of the Bank of England.

Bonito is the name given to several species of fish, intermediate in size between mackerel and tuna. The name comes directly from the Spanish word for “pretty”. In some parts of Spain, tuna is known as “Bonito del Norte”.

30. Half of a call-and-response game : MARCO

Marco Polo is a game of tag that is played in a swimming pool.

We call a remarkable thing or a person a “lulu”. The term was coined in honor of Lulu Hurst, the Georgia Wonder, who was a stage magician active in the 1880s.

36. Area around the altar : CHANCEL

The chancel of a Christian church is the space surrounding the altar. The chancel sometimes includes the choir and the pulpit.

42. Tries for a better price : HAGGLES

New Mexico’s Taos County was formed in 1852 as one of the nine original counties in the New Mexico Territory.

The Dust Bowl was a period in which severe dust storms ravaged the American and Canadian Prairies in the thirties. A major factor in the storms was the loss of the deep-rooted grasses native to the land that had been displaced by intensive farming. Without the grasses, the topsoil was blown away in a period of drought.

Cy Twombly was an American painter who was nicknamed for baseball star Cy Young. Cy Twombly’s father was also nicknamed “Cy”, and indeed pitched for the Chicago White Sox. Cy Twombly, Jr. moved to Italy in 1957, when he was in his late thirties.