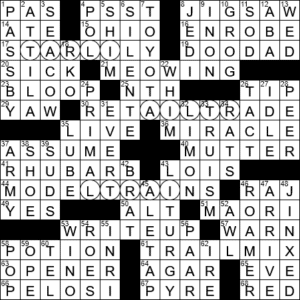 Themed answers each include the letter string T-R-A-I-L, but with the order MIXED:

Father’s Day was added as an official holiday in 1972, although bills to create the holiday had been with Congress since 1913. By rights, the holiday should be called “Fathers’ Day” (note the punctuation), but the bill that was introduced in 1913 used the “Father’s Day” spelling, and that’s the one that has stuck.

Leucocrinum is a perennial plant that is native to the American West. It is a stemless plant, and grows to a height of maybe 4 inches. Because it has star-shaped flowers and long, narrow leaves, the leucocrinum is also known as the star lily.

Lionel is the brand name most associated with toy trains in the US. The first Lionel trains rolled off the production line in 1901 and they are still produced today, although the original Lionel Corporation is long gone. In 1995, the brand was bought by an investment company that included train enthusiast Neil Young (the singer), and operated as Lionel, LLC. Neil Young’s financial involvement ended after a 2008 reorganization of the company following a Chapter 11 bankruptcy filing, but the company is still producing and selling.

The words “Jane” and “June” both end with a silent letter E.

“Whim”, meaning “sudden fancy”, is such a lovely word, and one that we’ve been using in English since the 1640s. “Whim” is actually a shortened form of “whimwham”, which has a similar meaning and has been around since the early 1500s.

A primal scream is a release of intense anger and frustration as part of primal therapy. Primal therapy is a treatment for mental illness developed by American psychologist Arthur Janov. Our use of the term “primal scream” stems from his 1970 book ”The Primal Scream”.

Chris Evert is a former professional tennis player from Fort Lauderdale, Florida. She has the best winning percentage in professional tennis, man or woman worldwide, losing less than 10% of all her matches. Evert was also the first female athlete to host “Saturday Night Live”, doing so in 1994 just after she had retired from professional tennis.

38 A tree helps it keep its shape : SHOE

A shoe tree (or boot tree) is an adjustable, foot-shaped device that is placed inside a shoe to preserve its shape. Shoe trees are often constructed from solid wood that absorb odor and wick away moisture from the shoe’s leather.

The term “skid row” is used to describe a run-down urban neighborhood. “Skid row” appears to have originated in the Pacific Northwest where a “skid road” was a wooden pathway used for “skidding” logs through forests and over bogs. The terms “skid road” and “skid row” came to be used for logging camps and mills, and then somehow was applied to run-down areas in cities up and down the west coast of North America. The related term “hit the skids”, meaning “fall into ruin”, has the same etymology, and embraces the concept of logs moving rapidly downhill on skids in a skid road.