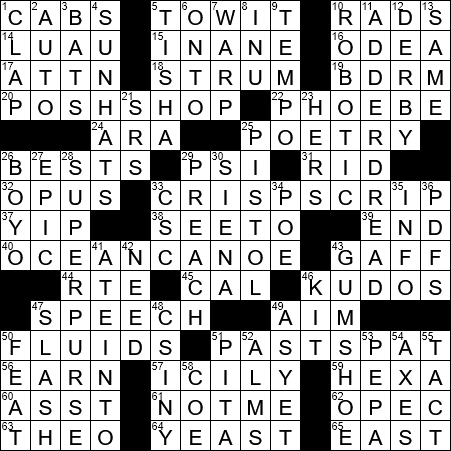 Themed answers each comprise two words, one of which is an anagram of the other:

“Boutique” is a French word describing a small shop.

“The Catcher in the Rye” is the most famous novel from the pen of J. D. Salinger. The main character and narrator of the story is Holden Caulfield, a teenager who gets expelled from a university prep school. Caulfield also makes appearances in several short stories written by Salinger, as do other members of the Caulfield family. The title “The Catcher in the Rye” is a reference to the 1782 poem “Comin’ Thro” the Rye” by Scottish poet Robert Burns.

The constellation Scorpius is named for the scorpion. One of the brighter stars in Scorpius is Antares, which has a clearly perceptible red hue that is said to rival the redness of the planet Mars.

“Opus” is a comic strip that originally ran from 2003 to 2008. It was drawn by Berkeley Breathed, the cartoonist who is best known for “Bloom County”. “Opus” is set in Bloom County, and centers on the adventures of Opus the Penguin. When Breathed ended the strip, he went so far as killing off the main character. That said, it was revealed in a “Bloom County” episode that Opus is still alive, and has just been unconscious.

Scrip isn’t legal tender, but operates just like currency in specific applications. It is in effect a form of credit. Originally the word “scrip” was used for a certificate giving one the right to receive something, often shares of a stock. “Scrip” is probably short for (sub)script(ion) receipt.

A gaff is a dangerous-looking metal hook on the end of a pole that fishermen use to drag large fish into their boats.

Our word “kudos” means acclaim given for an exceptional achievement. “Kudos” is both a singular and plural noun, and comes from the Greek “kyddos” meaning “glory, fame”.

“Luke Cage” is a Netflix TV show based on the Marvel Comics superhero of the same name. The title character is a reformed convict with superhuman strength, and is portrayed by Mike Colter. Nope …

2 Mercury or Saturn, but not Mars : AUTO

Saturn was a brand of automobile introduced by General Motors (GM) in 1985. The Saturn line was GM’s response to the increase in sales of Japanese imports, and was initially set up as a relatively independent division within the company. Saturn had its own assembly plant, and its own network of retailers.

Pete Maravich was a professional basketball player who earned the nickname “Pistol Pete”. Maravich was forced to retire from the game in 1980 due to injury problems. He died eight years later from heart failure. An autopsy revealed that Maravich was missing a left coronary artery, which supplies blood to the heart muscle. His right coronary artery was grossly enlarged as a result, compensating for the defect.

Limerick is the fourth-most populous city in Ireland, after Dublin, Belfast and Cork. It is located on the Shannon Estuary, in the west of the country.

“The Twelve Labors of Hercules” is actually a Greek myth, although Hercules is the Roman name for the hero that the Greeks called Heracles.

Siena College is a Roman Catholic school, a Franciscan liberal arts college founded in 1937 in Loudonville, New York near Albany. The college is named for Saint Bernardino of Siena, a Franciscan friar who lives in the 15th century.

“Gumshoe” is a slang term for a private detective or private investigator (P.I.). Apparently the term dates back to the early 1900s, and refers to the rubber-soled shoes popular with private detectives at that time.

The “CSI” franchise of TV shows has been tremendously successful, but has finally wound down. “CSI: Miami” (the “worst” of the franchise, I think) was cancelled in 2012 after ten seasons. “CSI: NY” (the “best” of the franchise) was cancelled in 2013 after nine seasons. The original “CSI: Crime Scene Investigation”, set in Las Vegas, hung in there until 2015 when it ended with a two-hour TV movie. The youngest show in the series was “CSI: Cyber”. It lasted for two seasons, before being canceled in 2016.

Salt-N-Pepa are an all-female hip hop trio from New York made up of “Salt” (Cheryl James), “Pepa” (Sandra Denton) and “DJ Spinderella” (Deidra Roper). The group’s 1991 song “Let’s Talk Sex” created quite a fuss as the lyrics explored the subject of sex, and safe sex in particular. A later version addressed the dangers of AIDS.