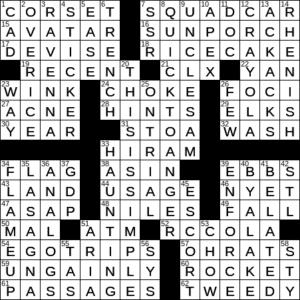 The Sanskrit word “avatar” describes the concept of a deity descending into earthly life and taking on a persona. It’s easy to see how in the world of online presences one might use the word avatar to describe one’s online identity.

“Yan Can Cook” is a PBS show about Chinese cooking presented by Martin Yan. Yan is Chinese-born American who arrived in the US via Hong Kong and Canada. Although his own show doesn’t run anymore, he still makes TV appearances and has been a judge several times on “Iron Chef America”.

29 Plural used for people but not animals : ELKS

A stoa was a covered walkway in ancient Greece. A stoa usually consisted of columns lining the side of a building or buildings, with another row of columns defining the other side of the walkway. The columns supported a roof. Often, stoae would surround marketplaces in large cities.

Our verb “to hurtle” means “to move rapidly or forcefully”, and comes from an early 14th-century word “hurteln” meaning “to crash together, knock down”. I guess the idea is that hurtling along can cause a nasty collision.

Ravenna is an inland Italian city located close to the Adriatic Sea, and connected to it by 7 miles of canal.

The trench coat was developed primarily for the use of the military. It is a waterproof coat that extends to just below the knee, and generally has a removable lining. In the world of Hollywood we often encounter the trench coat. One is worn by Humphrey Bogart in “Casablanca”, and by Peter Sellers in the “Pink Panther” movies.

Someone described as irascible has a hot temper and is easily provoked. The term “irascible” comes from the Latin “ira” meaning “anger”.

Ghent is a city in the Flemish region of Belgium. The War of 1812 (between Britain and the US) formally concluded with the signing of the Treaty of Ghent in 1814. The American negotiating team in Ghent included statesman Henry Clay and future vpresident John Quincy Adams.

Disney’s 1937 masterpiece “Snow White and the Seven Dwarfs” was the first cel-animated feature film. It is still one of the top ten box office hits in North America, adjusting for inflation. The film was a massive, expensive undertaking in the 1930s, and Walt Disney even had to mortgage his house to help with financing.

Silly Putty is a silicone polymer that is marketed as a toy, usually sold in an egg-shaped plastic container. It is a remarkable material that can flow like a liquid and can also bounce. Silly Putty was one of those accidental creations, an outcome of research during WWII in search of substitutes for rubber. The substitution became urgent as Japan invaded rubber-producing countries all around the Pacific Rim.

Back in the late 1800s, the British routinely used an oral spelling code to distinguish letter names used in wireless and telephone conversations. For example, “toc” was used for “T” and “emma” for “M”. The oral code for “A” was “ack”. When “antiaircraft” guns were developed, the abbreviation “AA” was used for such artillery, which in oral code was pronounced “ack-ack”. We still hear the term “ack-ack” being used, although I tend to associate it mainly with WWII movies …

Something that is “Rhenish” pertains to the Rhine River or the area surrounding it.

40 Where some picnicking takes place : BY A LAKE