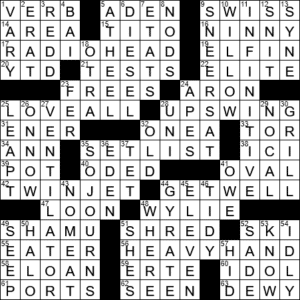 Themed answers each comprise two words, both of which are kinds of SET:

“Swiss cheese” is a relatively generic term for a type of cheese produced in various countries and not necessarily in Switzerland. What they all have in common though, is a resemblance to the original Swiss Emmental cheese.

“Creep” is a 1992 song by English rock band Radiohead. There’s a chord progression in the “Creep” that is identical to one from “The Air That I Breathe” that was a 1974 hit for the Hollies. The writers of the latter song ended up with co-writing credits and a share of the royalties for “Creep”, after the publisher sued. Apparently, the whole kerfuffle was resolved amicably.

John Steinbeck considered “East of Eden” his magnum opus. Most of the storyline takes place near Salinas, just south of where I live here in the Bay Area. Two of the characters in the story are brothers Cal and Aron Trask, representative of the biblical Cain and Abel.

In tennis, a love set is won without one’s opponent winning a game.

Ann Beattie is a short story writer and novelist. Beattie’s first novel was “Chilly Scenes of Winter” published in 1976. It was adapted for the big screen in 1979 and released under the same title and also under the name “Head Over Heels”.

A twinjet is a twin-engine jet, one powered by two engines. The first twinjet to fly was a German fighter prototype, the Heinkel He 280 in 1940, although it never went into full production. The most prolific passenger airliner with a twinjet configuration is the Boeing 737, which first flew in 1967.

44 *Greeting card for an ailing friend : GET WELL (get set & well-set)

Something described as well-set is well established, or strongly built.

Elinor Wylie was an American poet and novelist who was active in the twenties and thirties. Wylie had quite the family tree. Born Elinor Hoyt, in Somerville, New Jersey, she was the grandchild of Henry M. Hoyt, who served as the 18th Governor of Pennsylvania. Her father was also named Henry M. Hoyt, and served as US Solicitor General under President Theodore Roosevelt.

Philip Wylie was an author from Beverly, Massachusetts, someone who published many works on many subjects in many genres. Wylie’s 1930 science fiction novel “Gladiator” partially inspired the Superman comic-book character. The science-fiction novel that he co-wrote called “When World’s Collide” provided inspiration for the comic strip “Flash Gordon”.

Bai Ling is a Chinese actress who moved to the US in 1994. Apparently, she claims she is from the moon, and her grandmother still lives there …

“The Crow” is another one of those action movies that is based on a comic book. The film was released in 1994 and stars Brandon Lee. Sadly, this was Lee’s last movie as he was accidentally shot on set in the stomach with a dummy bullet, which then lodged in his spine. Lee died eight days later.

In French, an “état” (state) is an “entité politique” (political entity).

The lovely tree known as a weeping willow is native to northern China, although is now found all over the world.

Back in 1964, the second most watched show on American television was ABC’s “Bewitched”. Sidney Sheldon was tasked with the job of creating a rival sitcom and he came up with “I Dream of Jeannie”, which first aired in 1965 and starred Barbara Eden in the title role. The censors had a big say in how the story developed. For starters, Jeannie’s skimpy costume was permitted on air, provided that Eden didn’t show off her navel on the screen. Also, Jeannie was only allowed to live with an unmarried man as long as the story made it clear that she slept in a bottle.