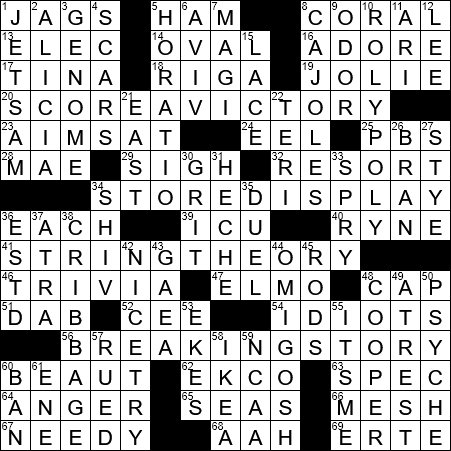 Today’s themed answers include the letters of the word “STORY” BROKEN, with part at the start of the answer and part at the end:

The wonderful avocado comes from a tree that is native to Mexico and Central America. The avocado fruit is sometime called an avocado pear, because of its shape, even though it is not related to the pear at all. The fruit might also be referred to as an alligator pear, due to the roughness of the green skin of some avocado cultivars.

Angelina Jolie is a remarkably successful Hollywood actress from Los Angeles, California. Jolie has acting in her blood as her father is actor Jon Voight. Her godparents are actors Jacqueline Bisset and Maximilian Schell. Jolie’s first marriage was to British actor Jonny Lee Miller, who plays Sherlock Holmes on the TV show “Elementary”. Her second marriage was to actor Billy Bob Thornton, and the third to actor Brad Pitt.

“Unbroken” is a 2010 biography of WWII hero and US olympic athlete Louis Zamperini. The book was written by Laura Hillenbrand, who also topped the bestseller lists with her 2001 title “Seabiscuit”. “Unbroken” was adapted into a 2014 film of the same name that was directed by Angelina Jolie.

“NewsHour” is the evening news program broadcast daily by PBS. The show started out as “The MacNeil/Lehrer Report” in 1975, and transitioned into the hour-long program “The NewsHour” in 1983. That transition made “NewsHour” the nation’s first hour=long nightly news broadcast.

Rita Mae Brown is an American author who is best known for her 1973 novel “Rubyfruit Jungle”.

There has always been a conflict between the theory of relativity and quantum theory. Basically, the theory of relativity works for “big stuff” but breaks down when applied to minute things like subatomic particles. On the other hand, quantum theory was developed to explain behavior at the subatomic level, and just doesn’t work on the larger scale. One of the reasons physicists are so excited about string theory is that it works at both the macro and micro levels. According to string theory, all particles in the universe are really little “strings”, as opposed to the points or ball-shaped entities assumed by the other theories.

47. Red Muppet who refers to himself in the third person : ELMO

A humdinger or a pip is someone or something outstanding. “Humdinger” is American slang dating back to the early 1900s, and was originally used to describe a particularly attractive woman.

“Flotsam” and “jetsam” are both terms used to describe garbage in the ocean. Flotsam is floating wreckage from a ship or its cargo. Jetsam is similar to flotsam, except that it is part of a ship or cargo that is deliberately cast overboard, perhaps to lighten a vessel.

Alicia Keys is the stage name of Alicia Cook, an R&B and soul singer from Hell’s Kitchen in New York City.

The “Horatio Hornblower” series of novels were written by English author C. S. Forester. Hornblower is an officer in the Royal Navy during the Napoleonic Wars.

“Magi” is the plural of the Latin word “magus”, a term applied to someone who was able to read the stars. Hence, magi is commonly used with reference to the “wise men from the East” who followed the star and visited Jesus soon after he was born.

The first Air Wick air freshener was introduced in the United States, in 1943.

Lee Child is the pen name of British thriller writer Jim Grant. The hero of Child’s stories is an American ex-military policeman called Jack Reacher. The novel “One Shot” was adapted for the big screen as “Jack Reacher”, which was released in 2012 with Tom Cruise in the title role.

There was a draper in London in the seventeenth century called Doiley, and he gave his name to the lace fabric that he sold, which in turn gave its name to the ornamental mat that we call a “doily”. I can’t stand doilies …

East Los Angeles (usually “East LA”) is the most populous “census-designated place” in California, and is home to over 125,000 people.

My favorite movie starring the actress Anne Heche is “Six Days Seven Nights”, a romantic comedy in which she plays opposite Harrison Ford. Heche is noted for her difficult private life. She wrote that her father had molested her as a child and gave her a sexually transmitted disease (he later revealed that he was homosexual, and died of AIDS). Heche dated comedian Steve Martin for two years, and then lived with comedian Ellen DeGeneres for three. Soon after breaking up with DeGeneres, she started exhibiting eccentric behavior for a while, claiming that she was the daughter of God, and that she would take everyone back to heaven in her spaceship. Happily, I think things have calmed down for her in recent years.

The 1997 movie “Wag the Dog” is a black comedy starring Dustin Hoffman and Robert De Niro. It tells the story of a fake war that is manufactured by a Washington spin doctor in order to distract the American electorate. It is based on the novel “American Hero” by Larry Beinhart. In the movie the war is fictitious and the president goes unnamed. In the novel, Beinhart uses Desert Storm as the war in his storyline, and George H. W. Bush as the President.

“Shiv” is a slang term for a weapon crudely fashioned to resemble a knife. Mostly we hear of shivs that have been fashioned by prison inmates to do harm to others.

The Greek goddess personifying the earth was Gaea (meaning “land” or “earth” in Greek). The Roman equivalent goddess was Terra Mater, “Mother Earth”.

48. Writer for whose father the National Baseball Hall of Fame city was named : COOPER

Sigmund Freud was an Austrian neurologist, and founder of the psychoanalytic school of psychiatry. One of Freud’s tenets was that our dreams are a necessary part of sleep as they prevent the dreamer from awakening due to desire for unfulfilled wishes. The dream’s content represents those unfulfilled wishes and satisfies the desire.

47. Red Muppet who refers to himself in the third person : ELMO

35. Fight that may involve drawing : DUEL

48. Writer for whose father the National Baseball Hall of Fame city was named : COOPER