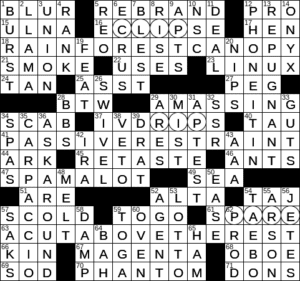 Today’s Reveal Answer: A Cut Above the Rest

Circled letters in the grid are synonyms of “CUT”, and sit ABOVE the letters “REST”:

The smoke and mirrors technique used by an illusionist involves the reflection of an image off a mirror onto a cloud of smoke, creating the impression that an object is floating in space. We now use the phrase “smoke and mirrors” to refer to anything that appears to be an illusion, that cannot stand up to close examination.

What we tend to call “duct” tape today was originally known as “duck” tape. In its first form, duck tape was rubber-based adhesive applied to a duck cloth backing, hence the name. Cotton duck cloth is a canvas-like material, a plain woven cotton fabric. The name “duck” comes from the Dutch “doek” meaning “linen canvas”. Duck tape started to be known as “duct tape” in the fifties, as it was commonly used to wrap air ducts in the construction industry.

The Linux operating system uses as its mascot a penguin named “Tux”.

One might see an intravenous drip (IV) in an intensive care unit (ICU), operating room (OR) or emergency room (ER).

The ancient unit of length called a cubit was chosen as the length of the forearm. In some cultures a cubit was divided into 7 palms, the width of the hand excluding the thumb.

The hit musical “Spamalot” is a show derived from the 1974 movie “Monty Python and the Holy Grail”. In typical Monty Python style, the action starts just before the curtain goes up with an announcement recorded by the great John Cleese:

(You can) let your cell phones and pagers ring willy-nilly … (but) be aware there are heavily armed knights on stage that may drag you on stage and impale you.

The Red Sea (sometimes called the “Arabian Gulf”) is a stretch of water lying between Africa and Asia. The Gulf of Suez (and the Suez Canal) lies to the north, and the Gulf of Aden to the south. According to the Book of Exodus in the Bible, God parted the Red Sea to allow Moses lead the Israelites from Egypt.

“Cria” is a name given to a baby llama, as well as to similar creatures such as the young of alpacas. “Cria” is a Spanish word meaning “baby”.

8 What yeast makes dough do : RISE

On a baseball scorecard, a walk is recorded as “BB”, which stands for “base on balls”.

Carpaccio can be meat or fish. It is sliced very thinly, or may be pounded until it is thin, and then served raw. Carpaccio is a relatively contemporary dish, first served in 1950 to a countess in Venice, Italy. The lady informed the restaurant owner that her doctor had advised her to eat only raw meat, so she was served thin slices of uncooked beef in a mustard sauce. The owner of the restaurant thought that the colors of the dish reminded him of paintings by Vittore Carpaccio, so he gave it the name “Carpaccio”. Well, so the story goes …

A Western omelet (sometimes “omelette”) is also known as a Southwest omelet or a Denver omelet. The usual ingredients include diced ham, onions and green bell peppers.