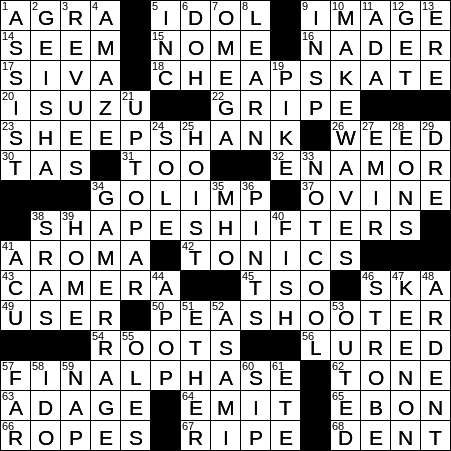 Themed answers include the letters S-H-A-P-E, but those letters have been SHIFTED around:

The Center for Auto Safety is a consumer advocacy group that was founded in 1970 by political activist Ralph Nader and Consumers Union. The group lists a number of successes in its quest for protection of automobile owners, including the introduction of Lemon Laws that provide consumers protections in all fifty states.

The Hindu Trinity comprises Brahma the creator, Vishnu the maintainer or preserver, and Shiva (also “Siva”) the destroyer or transformer.

Isuzu is a Japanese auto manufacturer that is very successful in the medium and heavy truck market in particular. You’ll be seeing fewer and fewer Isuzu passenger cars on American roads though, as the company exited the US passenger car market in 2008. The Isuzu Trooper was one of the company’s most successful SUVs, and was produced between 1981 and 2005.

A sheepshank is a knot used to shorten a rope, without the need to use the ends of said rope. The sheepshank was more helpful in days past. More recently, the knot is prone to slip due to the smoothness of synthetic rope.

38 Amorphous sci-fi beings, and a hint to what’s hidden in the four other longest answers : SHAPESHIFTERS

A mythical creature that can shapeshift has the ability to change its physical form.

A tonic is medication that is said to restore health. The original use of the term “tonic” was as an adjective meaning “increasing body tone”.

The Latin term “camera” means “vaulted room”. In the 1600s, the term “camera obscura” was coined to describe a “darkened room”. This usage was extended to describe an optical device made from a room with a small hole in one wall. Light from the scene outside passes through the hole and projects an image onto the inside walls of the room. The smaller the hole, the sharper is the image. Camera obscuras also came in smaller sizes, in the form of darkened boxes instead of rooms. These boxes developed (pun!) into our modern “cameras”.

The Mighty Mighty Bosstones is a ska punk band that formed in 1983 in Boston. The band hosts an annual music festival in Boston around Christmas that is known as the Hometown Throwdown.

54 Miniseries based on a Haley novel : ROOTS

“Memoirs of a Geisha” is a novel by American writer Arthur Golden that recounts the life of a geisha working in Kyoto, Japan before, during and after WWII. Golden was helped in his research by a retired geisha called Mineko Iwasaki who claimed that she provided assistance on condition of anonymity. When her name was published in the book, Iwasaki sued and ended up with an undisclosed settlement. There was a 2005 movie adaption of the novel, which also led to some criticism in Japan. The concern was that Chinese actresses were used for the main female roles instead of Japanese actresses.

The Seamaster is line of watches that Omega has produced since 1948. The Seamaster name arose because the original design was based on watches made for the Royal Navy during WWII. On the silver screen, James Bond has been wearing an Omega Seamaster since 1995.

“To pass muster” means “to be deemed acceptable”. One musters troops, often for inspection. So, the original meaning of “pass muster” was to “get through a military inspection successfully”.

The Côte d’Azur is on the Mediterranean coast of France and stretches from Saint-Tropez in the west and to the Italian border in the east. In English we often refer to the area as “the French Riviera”. It’s a little crowded for me (okay, “expensive”), especially in the summer.