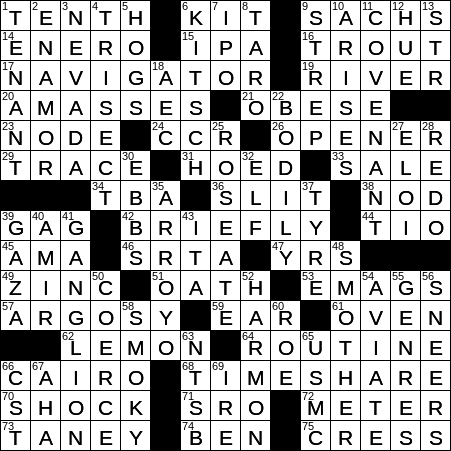 Themed answers are common words that have been split in two and reinterpreted as varying types of creatures:

Mike Trout plays baseball for the Los Angeles Angels. Trout’s nickname is “the Millville Meteor”, as he grew up in Millville, New Jersey.

The Snake River in the US northwest is the largest tributary of the Columbia River. The Snake River carved out the magnificent Hells Canyon, which is North America’s deepest river gorge.

The verb “to rack up”, meaning “to accumulate”, first appeared in print in 1943, in “Billboard”. It’s likely that the term comes from the system of scoring points in pool halls.

Brie is a soft cheese that is named for the French region in which it originated. Brie is similar to the equally famous (and delicious) Camembert.

The Kingdom of Castile was one seven medieval kingdoms of the Iberian Peninsula. The name comes from the large number of castles that were built across the kingdom.

“Slate” is an online magazine that was founded in 1996. “Slate” was originally owned by Microsoft and was part of the MSN online offering. The magazine has been available for free since 1999 (it is ad-supported) and has been owned by the Washington Post Company since 2004.

A large merchant ship might be referred to as an “argosy”, especially if it carries a rich cargo. The term comes from the Croatian city of Dubrovnik, which lies on the Adriatic coast. Once called Ragusa (“Arragosa” in English), the city was the departure point for ships laden with goods imported into 16th-century Britain.

Sprite is Coca-Cola’s answer to the very successful soft drink called 7 Up. Sprite was introduced in 1961, and Coca-Cola used its muscle to topple 7 Up from its dominant position in the market. Sprite has been the number-one selling lemon-lime soda since 1978.

The Cairo Conference was a 1943 meeting held between the leaders of the US, the UK and the Republic of China, i.e. Franklin Roosevelt, Winston Churchill and Chiang Kai-shek. Held at a residence belonging to the US Ambassador to Egypt, the conference was intended to coordinate strategy against Japan during WWII, and to discuss the makeup of post-war Asia. Roosevelt and Churchill moved on to Tehran, Iran for the Tehran Conference with Joseph Stalin that was held two days later.

Hares belong to the genus Lepus, and young hares under one-year-old are called leverets.

Roger B. Taney was Chief Justice of the US Supreme Court from 1836 until 1864 (when he passed away). Taney’s most notable decision was in the case of Dred Scott v. Sandford, in which he delivered the majority opinion that African Americans could not be considered citizens of the US. Taney was the second-longest serving Chief Justice (Chief Justice John Marshall served for 34 years, from 1801 to 1835).

John Marshall was Chief Justice of the Supreme Court from 1801 to 1835. Just before joining the court, Marshall served as secretary of state in the administration of President John Adams. On the bench for over 34 years, Marshall is the longest-serving chief justice in the nation’s history.

“Kitsch” is a German word, and is an adjective that means “gaudy, trash”.

In English folklore, the fairy’s anti-hero is the diminutive gnome, an evil ugly character. Over the centuries, the gnome has become more lovable. We now have garden gnomes, and even the Travelocity Gnome.

“Coven” is an old Scottish word meaning simply “gathering”. The first known application of the word to witchcraft came during the trial of a Scotswoman in 1662 accused of being a witch. At that time, “coven” came to mean a group of 13 witches.

A orchestra (orch.) has a string (str.) section.

The Atomic Energy Commission (AEC) was set up right after WWII in 1946, with the aim of promoting the peaceful use of atomic energy. Establishing the AEC was a significant move made by President Truman, as it passed control of atomic energy from the military to the civilian sector. The AEC continued to operate until 1974 when its functions were divided up into two new agencies: the Nuclear Regulatory Commission (NRC) and the Energy Research and Development Administration (NRDA). The NRDA was merged with the Federal Energy Administration in 1977 to form the Department of Energy.

Something roseate is rose-colored, as in the idiomatic phrase “rose-colored glasses”. It is from this phrase that we get the usage of “roseate” to refer to someone who is optimistic, perhaps overly so.

A brownie is an elfin figure in Scottish and English folklore. Brownies are purported to live in houses, helping with work around the house, but only at night when they can’t be seen. Believers might leave small items of food for the brownies, to encourage them to help out.

An arroyo is a small stream, or more often, a dry riverbed.

After the 1948 Arab-Israeli War, the boundaries of the strip of land on the Mediterranean around Gaza were fixed in the Israel-Egypt Armistice Agreement. The boundaries were specifically defined but were not to be recognized as an international border. From 1948, the Gaza Strip was occupied and administered by Egypt, until 1967 when Israel took over occupation following the Six-Day War. In 1993, Israel and the PLO signed the Oslo Accords which handed over administration to the Palestinian Authority, but with Israel retaining control of the Gaza Strip’s airspace, some land borders and its territorial waters. The intent was to further this agreement, but discussions between the parties broke down. Israel withdrew from Gaza in 2005.

41. One of a group of feline predators? : GANG LION (looks like “ganglion”)

A ganglion is a cluster of nerve cells in the body external to the brain or spinal cord.

Actor Mark Harmon is best known today for playing the lead in the drama show “NCIS”. Harmon played a similar character for several episodes on “The West Wing”. Mark is the son of a football star Tom Harmon, and was the brother-in-law of rock and roll star Ricky Nelson and automotive executive John DeLorean (through his sisters). Harmon has been married since 1987 to actress Pam Dawber, who played the female title role on “Mork & Mindy”.

A fluke is a type of flatfish, one often referred to as a “summer flounder”.

In the aviation industry, a black box is an audio or data recorder installed in an aircraft as an aid in the event that an accident investigation is necessary. The “black” box is actually bright orange, so that it is easier to find after an accident.

Camp Pendleton is a large Marine Corps base located on the Southern California coast in San Diego County. The base was opened during WWII, in 1942, and was named for Marine Corps Major General Joseph Henry Pendleton, who passed away that same year after 40 years of service.