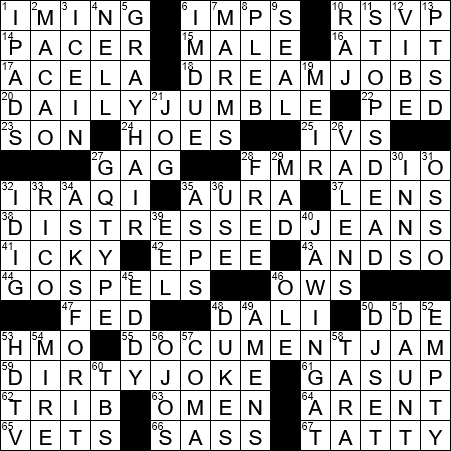 Even though instant messaging (sending IMs) has been around since the 1960s, it was AOL who popularized the term “instant message” in the eighties and nineties. The “AOL Instant Message” service was known as AIM.

The Indiana Pacers are the professional basketball team based in Indianapolis, who play in the NBA. The name was chosen when the team was formed in 1967. “Pacers” is a homage harness racing pacers (famed in Indiana) and the pace car used in the Indianapolis 500.

17. Fast train in the Northeast : ACELA

Professional crossword solver, perhaps? If only …

The Daily and Sunday Jumbles are syndicated puzzles from Tribune Media Services that are syndicated widely in newspapers all over the English-speaking world. The first Jumble was created in 1954 by Martin Naydel.

The Parable of the Prodigal Son is related in the Gospel of Luke. Someone who is prodigal is wasteful or extravagant. The parable tells of a man with two sons. The youngest asks for and receives his share of the family estate, and then spends it all unwisely. The “prodigal” son returns, to an unwelcoming older brother. The father, however, declares happily that his son “was lost and now is found”.

Nîmes is a lovely city in the south of France. One of the claims to fame of the city is the invention of denim fabric. The French phrase “de Nimes” (from Nimes) gives us the word “denim”. Also, the French phrase “bleu de Genes” (blue of Genoa) gives us our word “jeans”.

44. Matthew and Mark wrote two of them : GOSPELS

The famous surrealist painter Salvador Dalí was born in Figueres, Spain. I had the privilege of visiting the Dalí Museum in Figueres some years ago, just north of Barcelona. If you ever get the chance, it’s a “must see” as it really is a quite magnificent building with a fascinating collection.

Nell Fortner is a former college basketball coach, who most notably led the Auburn team from 2004 until 2012. Fortner also coached the US national team to victory in the 2000 Summer Olympics in Sydney.

“Marm” is short for “schoolmarm”, a quaint term for a female teacher.

Jim Parsons is an actor from Houston, Texas who is best known for playing Sheldon Cooper on the television sitcom “The Big Bang Theory”. As of 2014, Parsons and his co-stars Johnny Galecki and Kaley Cuoco are earning one million dollars per episode of the show.

Ritchie Valens was a pioneer in the world of rock & roll and in Chicano rock in particular. Sadly, his recording career lasted less than a year, as Valens was killed in a plane crash in 1959, on “the Day the Music Died” (to quote Don McLean in “American Pie”). That plane crash in Iowa also claimed the lives of Buddy Holly and The Big Bopper (JP Richardson).

The 1958 single “Donna” by Ritchie Valens is one of those A-sides that was outshone by the record’s B-side, which in this case was “La Bamba”. “Donna” was written as a tribute to Valens’ high school sweetheart Donna Ludwig.

The term “beatnik” was coined by journalist Herb Caen in 1958 when he used it to describe the stereotypical young person of the beat generation that was oft associated with the writer Jack Kerouac.

A duke is a high-ranking nobleman. The term “duke” comes in to English via the French “duc”, and ultimately derives from the Latin verb “ducere” meaning “to lead”.

50. Track mix for a party, and what the five longest Across answers comprise : DJ SET

Tara Reid is an actress known for roles she played on television and the big screen. My guess is her most-remembered performances were in the “American Pie” series of movies in which she played Vicky. Sadly, Reid succumbed to the pressure to alter her looks with plastic surgery. In interviews, she has shared that her first experience under the knife “went wrong” leading to more surgeries in attempts to rectify the resulting deformity.