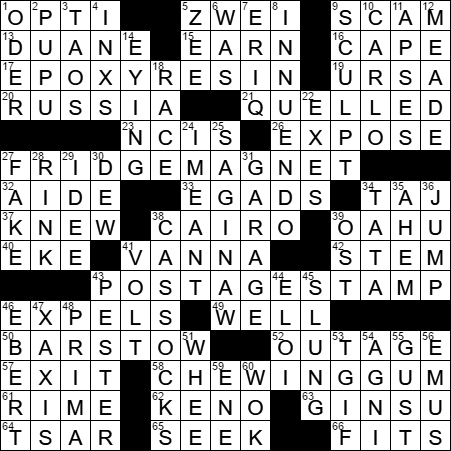 Today’s themed answers are all STICKERS:

Duane Eddy is a rock and roll guitarist from Corning, New York.

NCIS is the Naval Criminal Investigative Service, which investigates crimes in the U.S. Navy and Marine Corps. The service gives its name to the CBS TV show “NCIS”, a spin-off drama from “JAG” in which the main “NCIS” characters were first introduced. The big star in “NCIS” is the actor Mark Harmon. “NCIS” is now a franchise, with spinoff shows “NCIS: Los Angeles” and “NCIS: New Orleans”.

Cairo is the capital city of Egypt. It is the largest city on the continent of Africa and is nicknamed “The City of a Thousand Minarets” because of its impressive skyline replete with Islamic architecture. The name “Cairo” is a European corruption of the city’s original name in Arabic, “Al-Qahira”.

Memphis was an ancient city on the River Nile. The ruins of Memphis are located just south of Cairo, Egypt. It was a magnificent city that eventually failed due to the economic success of the city of Alexandria, located further down the river and right on the Mediterranean coast.

39. Pacific island where much of “Lost” was filmed : OAHU

50. I-15 city between Los Angeles and Las Vegas : BARSTOW

Barstow is a California railroad town that grew with the success of mining operations in the Mojave desert. The city is named for William Barstow Strong, who served as president of the Atchison, Topeka and Santa Fe Railway from 1881 to 1889.

Interstate 15 runs north-south from the US -Canada border at Sweet Grass, Montana to San Diego, California.

The name “Keno” has French or Latin roots, with the French “quine” being a term for five winning numbers, and the Latin “quini” meaning “five each”. The game originated in China and was introduced into the West by Chinese immigrants who were working on the first Transcontinental Railroad in the 1800s.

n Hawaiian, “pu-pu” is a word originally meaning “snail”. Nowadays “pu-pu” denotes many different types of food that are usually served as an hors d’oeuvres. A “pupu platter” then is a selection of such foods served in a Hawaiian restaurant.

Ghost Ranch is a 21,000-acre property in north central New Mexico that served as Georgia O’Keefe’s home and studio from 1945 until 1984. The ranch now serves as a retreat and education center.

The consonant Z (zee) is the fourth letter in the word “crazy”.

Eriq La Salle played Dr. Peter Benton on “ER”, and is best known in film for his portrayal of Darryl in the 1998 comedy “Coming to America”.

“Under the Dome” is a sci-fi show that is based on a novel of the same name by Stephen King. The storyline involves a small town in Maine that is inexplicably covered with a transparent indestructible dome that cuts the inhabitants off from the rest of the world. It’s an intriguing concept for a novel/show, but I’m not a big fan of Stephen King …

The renowned Italian film producer Carlo Ponti was not quite as famous as his celebrity wife Sophia Loren. Ponti met Loren as a contestant in a beauty contest he was judging in 1950. Back then she was a budding young actress still using her real name, Sofia Lazzaro. The two married in 1957 even though divorce was illegal at the time in Italy, so Ponti was still married to his first wife.

George Meade was a career army officer with a depth of experience in civil and military operations even before the onset of the Civil War. During the war he rose to the level of commander of the Army of the Potomac, and is best remembered for leading the Union forces that defeated General Robert E. Lee at Gettysburg in 1863.

25. City “it took me four days to hitchhike from,” in Paul Simon’s “America” : SAGINAW

Saginaw is a city in central Michigan. The city blossomed as a lumber town in the 19th century. Logs were floated down the Saginaw river where they were processed in the town’s many sawmills before being loaded onto ships, and eventually onto railroad cars. Growth in the 20th century was driven by the automotive industry, with GM alone locating 12 manufacturing plants in and around Saginaw. Employment declined sharply in the latter 1900s along with the decline in the number of automotive jobs in the US.

Simon & Garfunkel’s 1968 song “America” tells of a young couple hitchhiking across the US. Paul Simon was inspired to write the song after he took an extended road trip in 1964 with his girlfriend at the time, Englishwoman Kathleen Chitty. Chitty also inspired Simon & Garfunkel hit “Kathy’s Song”.

The first ice resurfacing machine was developed in 1949 by one Frank Zamboni. The machine works by simultaneously executing a number of tasks. First, the surface of the ice is scraped off by a sharp blade. Next the ice is “washed” with water sprayed from the front of the Zamboni, and that wash water is vacuumed back up and filtered to remove impurities. Water is then reapplied to the scraped ice by a wet towel dragging behind the machine, forming a new skating surface.

An “idée fixe” (a French term) is basically a fixed idea, an obsession

Despite being late entering the eco-friendly car market, Chevrolet today produces the most fuel-efficient compact car with a gasoline engine that is sold in the US. The Chevrolet Volt went on sale at the end of 2010, and is a plug-in hybrid car that runs on batteries. The Volt has a gasoline engine that can be used run an electric generator if needed. The Volt also uses a regenerative braking system.

Roger Ebert was a film critic for “The Chicago Sun-Times” for 50 years. He also co-hosted a succession of film review television programs for over 23 years, most famously with Gene Siskel until Siskel passed away in 1999. Siskel and Ebert famously gave their thumbs up or thumbs down to the movies they reviewed. Ebert was the first film to win the Pulitzer Prize for Criticism, which he did in 1975. He was diagnosed and treated for thyroid cancer in 2002, and finally succumbed to a recurrence of the disease in April 2013.

An alkene is an organic compound made up of carbon and hydrogen atoms. It differs from an alkane in that it has at least one C=C double bond. The simplest alkene is the gas ethylene, a major raw material used in the manufacture of plastics (like polyethylene).

39. Pacific island where much of “Lost” was filmed : OAHU

50. I-15 city between Los Angeles and Las Vegas : BARSTOW

25. City “it took me four days to hitchhike from,” in Paul Simon’s “America” : SAGINAW

55. A strong one may invert an umbrella : GUST