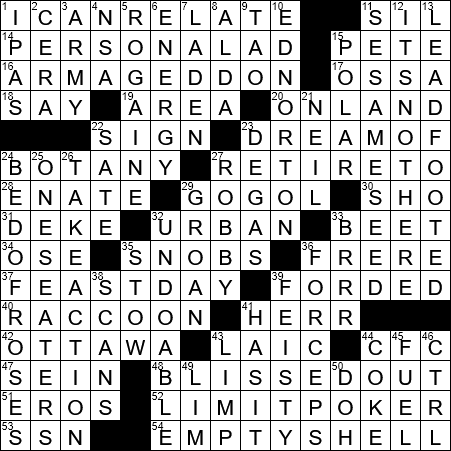 According to the Bible’s Book of Revelation, there will be a gathering of armies and a great battle during the “end of days”, and that battle between good and evil will take place at Armageddon.

Carl Linnaeus was a botanist and physician from Sweden. Linnaeus who developed the system of biological classification that we still use today. He introduced us to kingdoms, classes, orders, families, genera and species in his 1735 publication “Systema Naturae”.

Nikolai Gogol was a Russian writer, born in Ukraine. Gogol wrote a lot of satirical pieces that attacked corrupt bureaucracy in Russia, which led to his being exiled. His most famous work is probably “Taras Bulba”, from 1836.

“Billions” is a Showtime drama series starring Paul Giamatti and Damian Lewis. It’s about a federal prosecutor going after a hedge fund manager in New York. I haven’t seen this one, but hear good things. Must be good with Giamatti and Lewis starring …

In French, a “frère” (brother) is a “membre de la famille” (member of the family).

“Rocky Raccoon” is a folk rock song by the Beatles that they released in 1968. The song’s title inspired the creation of Marvel Comics superhero Rocket Raccoon, who features prominently in the “Guardians of the Galaxy” movies.

“Seinlangauge” is best-selling 1993 book by comedian Jerry Seinfeld. In the book, Seinfeld gives opinions on many subjects, from the prosaic to the profound. I hear that it’s pretty funny …

“Juno” is a great comedy-drama released in 2007 that tells the story of a spunky teenager who is faced with an unplanned pregnancy. The title character is played by Ellen Page, with Michael Cera playing the father of her child. The film won an Oscar for Best Original Screenplay. The relatively low-budget movie earned back its initial budget in the first day of its full release to the public. Low-budget blockbuster; my kind of movie …

Rogaine is a brand name for the drug Minoxidil. It was developed as an oral medication to treat high blood pressure, but was found to have an exploitable side-effect. It caused an increase in the rate of hair growth. A topical solution was marketed to promote growth of hair especially in balding men. The drug seems to work well, but when the patient stops using it, things go back to normal in about 60 days. Wouldn’t dream of touching the stuff myself …

10. Sitcom sidekick whose wife sometimes calls him by his last name : ED NORTON

Ralph Kramden and Ed Norton are two characters in “The Honeymooners”, played by Jackie Gleason and Art Carney. Kramden is a bus driver, and Norton works with the New York City sewer department.

Neil Armstrong was the most private of individuals. You didn’t often see him giving interviews, unlike so many of the more approachable astronauts of the Apollo space program. His famous, “That’s one small step for (a) man, one giant leap for mankind” statement; that was something that he came up with himself while Apollo 11 was making its way to the moon.

Forceps are a handheld instrument used to grasp objects, often objects too small to held securely by fingers. Nowadays, the use of the term “forceps” is almost exclusively limited to the medical profession. The various types of medical forceps resemble tweezers, tongs, pliers and clamps. “Forceps” is a Latin term originally describing a blacksmith’s tool used to grasp hot items.

Peru’s main airport is Jorge Chávez International Airport (LIM), and is located just a few miles from the nation’s capital Lima. The facility is named for Jorge Chávez, a pioneering Peruvian aviator who died in 1920 while attempting the first air crossing of the Alps.