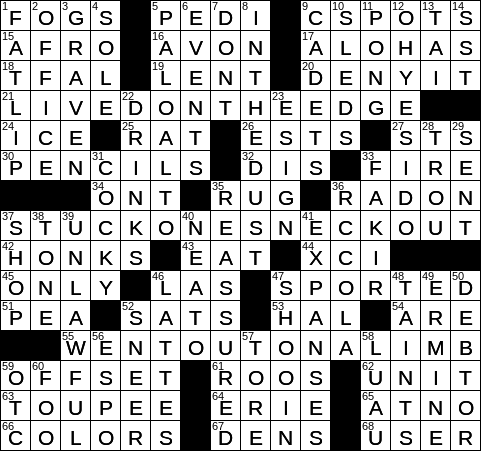 Today’s Theme (according to Bill): Risked It Big-Time

Themed clues are all the same, namely “Risked it big-time”:

16 Popular river name from the Welsh for “river” : AVON

There are actually four rivers called the Avon in England, but “Shakespeare’s Avon” lies mainly in Warwickshire. The name “Avon” comes from the Old English word “abona” meaning “river”. Stratford-upon-Avon was the birthplace of William Shakespeare.

A firebug is a pyromaniac, a person with an irresistible impulse to start fires.

The province of Ontario borders four of the Great Lakes, i.e. Superior, Huron, Erie and Ontario.

Nero was Emperor of Rome from 54 to 68 CE, and towards the end of his reign participated in the Olympic Games in the year 67. The Roman leader raced in a ten-horse chariot, of which he lost control and nearly perished after being thrown from the vehicle. Acting and singing were Olympic events back then, and Nero also took part in those competitions. By all accounts, Nero performed badly in every event in which he vied, and yet somehow still managed to win Olympic crowns that he paraded around Rome on his return from Greece.

The University of Nevada, Las Vegas (UNLV) was established in 1957 as the Southern Division of the University of Nevada, Reno. One of UNLV’s flagship departments is the William F. Harrah College of Hotel Administration, which is consistently ranked as one of the best hotel and hospitality colleges in the nation. I suppose that’s not surprising given the proximity to the Las Vegas Strip.

College Board is a company that develops and administers standardized tests used to determine college readiness in students and to provide a service within the college admissions process. The company was founded in 1899 at Columbia University by a dozen or so schools to provide guidance to secondary schools as they prepared students for third-level education.

Randy Johnson is a retired Major League Baseball pitcher. One of Johnson’s many claims to fame is that he became the oldest pitcher to ever throw a perfect game, doing so at 40 years of age in 2004. He was also one of the tallest mean to ever play in the majors, clocking in a height of 6 feet 10 inches and earning the nickname “the Big Unit”.

There are three Erie Counties in the US:

The chemical element carbon has the symbol C and atomic number 6. Pure carbon exists in several physical forms, including graphite and diamond.

In the Christian tradition, the second commandment prohibits the worship of “any graven image”. Usually, this means that graven images can be created but not worshipped.

14 Boomer that no longer booms : SST

When someone lies on a bed of nails, there is a sufficiently high number of nails so that the pressure exerted by each nail is not enough to puncture the skin.

OfferUp is an online platform for buying and selling used goods. The platform is optimized for smartphones, and uses geo-location to facilitate transactions between parties that are in close proximity to each other. OfferUp also partners with local police stations to establish safe, sign-posted meeting places where goods can be exchanged.

A shoo-in is a surefire winner, especially in politics. Back in the 1920s, a shoo-in was a horse that was prearranged to win a race, a race that was fixed.

Egg foo yung is a dish served in Chinese restaurants, and is basically an omelet. It probably takes its name from a flower called the Fu Yung.