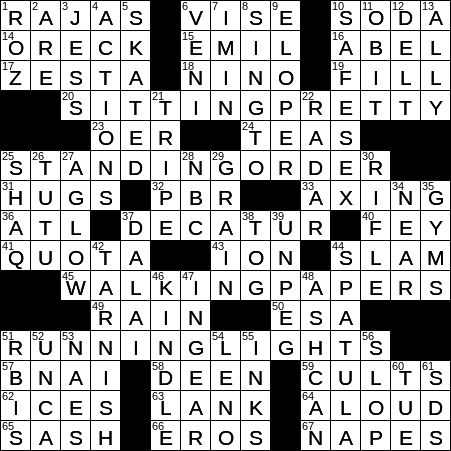 Themed answers are common phrases that start with a series movements from SITTING to RUNNING:

Emil Gilels was a pianist from the old Soviet Union who was born in Odessa (now part of Ukraine). Gilels was one of the first musicians allowed to perform concerts outside of the Eastern Bloc. His debut appearance in Philadelphia with Eugene Ormandy was a resounding success.

Zesta is a line of saltine crackers made by Keebler.

The city of Decatur in Central Illinois is known as “the Soybean Capital of the World”. The city’s most famous resident was Abraham Lincoln, and it was in Decatur that the future US President gave his first political speech.

Comic actress Tina Fey has a scar on her face a few inches long on her left cheek, which I was shocked to learn was caused by a childhood “slashing” incident. When she was just five years old and playing in the alley behind her house, someone just came up to her and slashed her with a knife. How despicable!

The term “pink-slip” can be used as a verb meaning “to terminate an employee”. No one really seems to know for sure where the phrase originated, but there are lots of stories.

Peri Gilpin is an actress best known for playing Roz Doyle on the hit sitcom “Frasier”. “Frasier” was a spinoff of “Cheers”. Gilpin actually made an appearance on the original show, albeit playing a completely different character.

Figure skating started out as a sport in which a skater demonstrated skill at carving out specific patterns into the ice (a figure-8, for example). Over time, the sport placed greater influence on free skating. Compulsory figures were dropped completely from most international competitions in the 1990, but the name “figure skating” has been retained.

The term “safe sex” refers to practices designed to reduce the risk of transferring sexually transmitted diseases. The general use of the phrase in a such a context originated in the 1980s in response to the HIV/AIDS crisis in the US. That said, the phrase was around in the 1930s when it referred to practices used to contain diseases like gonorrhea and syphilis.

“Tripe” is an informal term meaning “rubbish, of little value”. Tripe is actually the rubbery stomach lining of an animal such as a cow. Tripe is a traditional dish in British cuisine that prepared by poaching it with onions in milk.

Scientists have been using radio waves to detect the presence of objects since the late 1800s, but it was the demands of WWII that accelerated the practical application of the technology. The British called their system RDF standing for Range and Direction Finding. The system used by the US Navy was called “Radio Detection And Ranging”, which was shortened to the acronym RADAR.

The verb “to tog up”, meaning “to dress up”, comes from the Latin “toga” describing the garment worn in Ancient Rome. “Tog” can be also be used as an informal word for a coat or a cloak. Back in Ireland, togs are what we call swimming shorts.

A spatula is a tool or implement used for mixing, lifting or spreading. “Spatula” is the Latin name for the tool, and is a diminutive of the word “spatha” meaning “broad, flat blade”. “Spatha” ALSO gives rise to our related term “spade”.

Glasgow is the largest city in Scotland and sits on the River Clyde. Back in the Victorian Era, Glasgow earned a reputation for excellence in shipbuilding and was known as “Second City of the British Empire”. Glasgow shipyards were the birthplaces of such famous vessels as the Lusitania, the Queen Mary and the Queen Elizabeth. People for Glasgow are known as Glaswegians.

“Jay Leno’s Garage” is a weekly show that has aired on TV since 2015. The show originated as a web series for NBC, but popularity dictated a move to primetime. The show focuses on Jay Leno’s Big Dog Garage located in Burbank, California that houses his huge collection of cars and motorcycles.