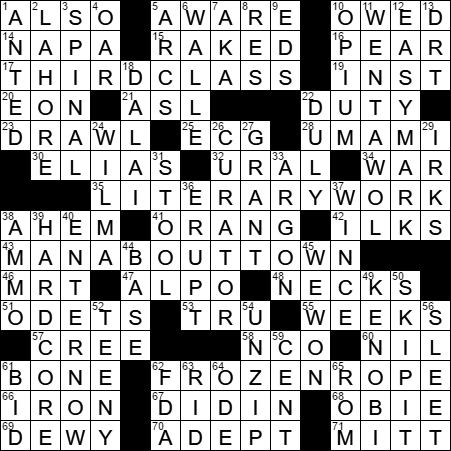 Each of today’s themed answers ends with something that is often SKIPPED:

21. Communication syst. for the hearing-impaired : ASL

28. One of the five basic tastes : UMAMI

Orangutans (also “orangs”) are arboreal creatures, in fact the largest arboreal animals known to man. They are native to Indonesia and Malaysia, living in the rain forests. Like most species in rain forests these days, orangutans are endangered, with only two species surviving. The word “orangutan” is Malay, meaning “man of the forest”.

Alpo is a brand of dog food first produced by Allen Products in 1936, with “Alpo” being an abbreviation for “Allen Products”. Lorne Greene used to push Alpo in television spots, as did Ed McMahon and Garfield the Cat, would you believe?

Clifford Odets was a playwright, screenwriter and director from Philadelphia. “Waiting for Lefty” was the first play by Clifford Odets that made it to stage, in 1935. The storyline deals with cab drivers who are planning a strike. Famously, the play breaks through the “fourth wall” by placing actors within the audience who react to the action taking place on the stage.

The larger-than-life Truman Capote was a celebrated author and comedian. Capote is perhaps most associated with his novella “Breakfast at Tiffany’s” and his true crime novel “In Cold Blood”. Truman Capote grew up in Monroeville, Alabama. There he met, and became lifelong friends with, fellow novelist Harper Lee. Capote was the inspiration for the character “Dill” in Lee’s celebrated work “To Kill a Mockingbird”. In turn, Harper Lee was the inspiration for the character “Idabel” in Capote’s “Other Voices, Other Rooms”.

In baseball, a “frozen rope” is a line drive that is hard hit, or a strong throw from the outfield. I guess a frozen rope is as straight as an arrow, or a well-hit baseball …

Lahore is a large city in Pakistan, second in size only to Karachi. It is known as the Garden of the Mughals (or in English, Moguls) because of its association with the Mughal Empire. The Mughals ruled much of India from the sixteenth to the nineteenth centuries.

Our word “dinghy” comes from the Hindi “dingi”, the word for a small boat.

“WALL-E” is a very cute Pixar movie, released in 2008. The hero of the piece is a robot called WALL-E, who loves his “Hello Dolly”, and who falls in love with another robot called EVE.

7. Letters before an alias : AKA

The opium poppy is the source of the narcotic alkaloids known as opiates. To produce opiates, the latex sap of the opium poppy is collected and processed. The naturally-occurring drugs of morphine and codeine can both be extracted from the sap. Some synthesis is required to make derivative drugs like heroin and oxycodone.

The 2000 movie “Dr. T & the Women” is a pretty good film, starring Richard Gere in the title role. There can’t be many romantic comedies about gynecologists …

24. The name Fred yells at the end of “The Flintstones” closing theme song : WILMA

Wilma is the wife of cartoon character Fred Flintstone. On the TV show, Wilma was voiced by Jean Vander Pyl. Vander Pyl was also provided the voice for Rosie the Robot on “The Jetsons”.

A “sweepstakes” is a lottery in which the participants pay into a fund that becomes the prize. The term “sweepstakes” comes from the Middle English word “swepestake”, the name for the person who “sweeps up” all the stakes in a game.

The original one-cent coin was introduced in the US in 1793 and was made of 100% copper. The composition varied over time, and was 100% bronze up to the 1940s. During WWII there was a shortage of copper to make bronze, so the US Mint switched to zinc-coated steel for production of one-cent coins in 1943. The steelie is the only coin ever issued by the US mint that can be picked up by a magnet. Today’s one-cent coin is comprised mainly of zinc.

Big Pharma is the nickname for the pharmaceutical industry. The nickname comes from the acronym for the lobbying group for the industry, the Pharmaceutical Research and Manufacturers of America (PhRMA).

21. Communication syst. for the hearing-impaired : ASL

28. One of the five basic tastes : UMAMI

3. Kind of column or cord : SPINAL

7. Letters before an alias : AKA

24. The name Fred yells at the end of “The Flintstones” closing theme song : WILMA