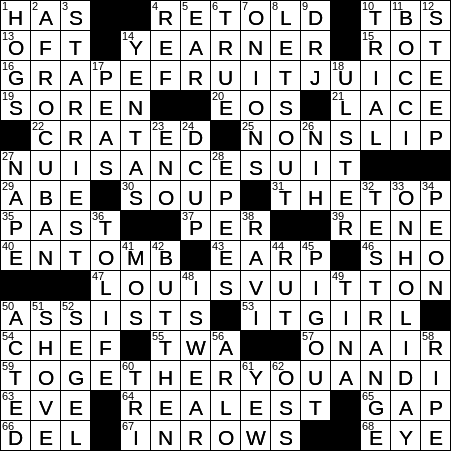 Today’s Reveal Answer: Together You and I

Themed answers each include two incidents of the letter sequence UI:

The sea breeze cocktail has been around in some form since the 1920s. The most common recipe today calls for vodka, cranberry juice and grapefruit juice. The variant called a bay breeze substitutes pineapple juice for the grapefruit juice.

Louis Vuitton founded his fashion house in Paris in 1854. His first product was a trunk, a piece of traveling luggage.

Clara Bow was a fabulous star of silent film, with her most famous movie being “It” from 1927. Clara Bow’s performance was so celebrated in the movie that she was forever to be known as the “It girl”. The term “it” was a euphemism for “sex appeal”, and that is what Clara Bow was known to “exude”. Bow applied her red lipstick in the shape of a heart, and women who copied this style were said to put on a “Clara Bow”.

Back in 1930, when TWA was known as Transcontinental & Western Air (T&WA), the airline introduced one of the first passenger services between the east and west coasts of the US. Known as the Lindbergh Line, travel took about 36 hours and involved an overnight stay in Kansas City.

Dolly Parton is a country music singer-songwriter, as well as an actress. Parton has written over 3,000 songs, my favorite of which is “I Will Always Love You”, a huge hit for herself and for Whitney Houston.

A severe tropical storm is called a hurricane when it occurs in the Atlantic and Northeast Pacific, a typhoon in the Northwest Pacific, and a cyclone in the South Pacific and Indian Ocean. Tropical storms form over warm water, picking up energy from the evaporation from the ocean surface.

1 Keeps to oneself : HOGS

To hog is to take more than one is due. Apparently, the first use of the verb “to hog” in this sense was in Mark Twain’s “Adventures of Huckleberry Finn”.

When an onion is sliced, cells are broken. Enzymatic reactions take place that result in the generation of a volatile gas, syn-propanethial-S-oxide. The gas irritates the eyes and tears are produced in order to clear them.

“L’Chaim!” is a Hebrew toast meaning “To life!”, with “chai” being the Hebrew word for “life”.

Actor Jason Segel is best known for playing Marshall on the sitcom “How I Met Your Mother”. Segel is an ordained minister with the Universal Life Church and performed a wedding ceremony on “The Tonight Show” in 2010.

“How I Met Your Mother” is a sitcom that CBS has been airing since 2005. The main character is Ted Mosby, played by Josh Radnor. Mosby is also the narrator for the show looking back from the year 2030 (the live action is set in the present). As narrator, the older Mosby character is voiced by Bob Saget.