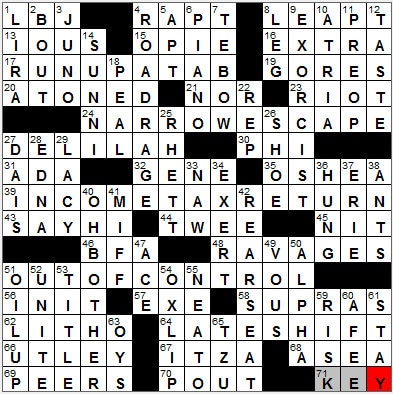 CROSSWORD SETTER: Julian Lim
THEME: Computer Keys … each of the theme answers ends with the name of a key on a PC keyboard:

71A. Each answer to a starred clue ends in one KEY

Across
1. President after JFK LBJ
President Lyndon Johnson (LBJ) is one of only four people to have held all four elected federal offices, namely US Representative, US Senator, US Vice-President and US President. As President he is perhaps best remembered for escalating involvement in the Vietnam War, and for his “Great Society” legislation.

John F. Kennedy was the 35th President of the US, and the fourth US president to have been assassinated in office. The previous three presidents who were killed in office were Abraham Lincoln, James Garfield and William McKinley.

8. Made like a kangaroo LEAPT
The name “kangaroo” comes from the Australian Aborigine term for the animal. There’s an oft-quoted story that James Cook (later Captain Cook) asked a local native what was the name of this remarkable-looking animal, and the native responded with “kangaroo”. The story is that the native was actually saying “I don’t understand you”, but as cute as that tale is, it’s just an urban myth.

21. “… __ a lender be” NOR
In Shakespeare’s “Hamlet”, Polonius is an important character eventually killed by Hamlet, albeit in a case of mistaken identity. Polonius has two memorable lines in the play, oft-quoted today. “To thine own self be true”, and “Neither a borrower nor a lender be”.

27. Biblical haircutter DELILAH
Delihah is a Biblical figure, the wife of Samson. Delilah was engaged by the Philistines to betray her husband by determining the secret of his great strength. Samson lied to his wife three times, but on the fourth asking he told his wife the truth, that he did not cut his hair. Delilah then convinced Samson to shear his locks, and so allowed him to be captured by his enemies. Over the centuries, it has been usual to depict Delilah actually cutting off her husband’s hair, but the Bible actually says that she persuaded Samson to do the job himself.

30. Letter between upsilon and chi PHI
Phi is the 21st letter of the Greek alphabet.

31. Cavity filler’s org. ADA
The American Dental Association (ADA) is the largest and oldest national dental association in the world. Today the ADA is based in Chicago, but the association was founded in Niagara Falls, New York in 1859. The ADA started out as a group of 26 dentists and it now has more than 152,000 members.

32. Trait carrier GENE
A gene is a section of a chromosome that is responsible for a particular characteristic in an organism. For example, one gene may determine eye color and another balding pattern. We have two copies of each gene, one from each of our parents, with each copy known as an allele.

35. Actor Milo O’SHEA
Milo O’Shea is a great Irish character actor from Dublin, who has appeared in everything from “Romeo and Juliet” to “The West Wing”.

39. *Annual April paperwork INCOME TAX RETURN
The Internal Revenue Service (IRS) was set up during the Civil War to raise money to cover war expenses. Prior to the introduction of income tax in 1862, the government was funded by levies on trade and property.

44. Affectedly dainty, to Brits TWEE
In the UK, something “twee” is cutesy or overly nice. “Twee” came from “tweet”, which is the cutesy, baby-talk way of saying “sweet”.

46. Writer’s undergrad deg. BFA
The degree of Bachelor of Fine Arts is primarily designed for students intent on pursuing a career in the visual or performing arts.

51. *Running amok OUT OF CONTROL
The phrase “to run amok” (sometimes “to run amuck”) has been around since the 1670s and is derived from the Malay word for “attacking furiously”, “amuk”. The word “amok” was also used as a noun to describe Malay natives who were “frenzied”. Given Malaya’s troubled history, the natives probably had good reason for that frenzy …

58. Bygone Toyotas SUPRAS
The Supra was a sporty car made by Toyota from 1979 to 2002. The Spura was in effect a longer and wider Celica.

62. Collectible print, briefly LITHO
Lithography is a printing technique that was invented in 1796 as a cheap way to publish theatrical works. In the litho process the image is drawn on a metal plate, although originally it was drawn on a stone (hence the prefix “litho-“). The image is drawn in such a way that some regions of the plate repel ink, and then when paper is applied to the plate, those areas are ink-free.

67. Chichén __: Mayan ruins ITZA
Chichén Itzá is a Mayan ruin located in the Mexican state of Yucatán. It is the second most visited archaeological site in the country (after the ancient city of Teotihuacan). Chichén Itzá has seen a surge in the number of visitors since the development of nearby Cancún as a tourist destination.

Down
1. Old Italian coin LIRA
The name “lira” is used in a number of countries for currency. It comes from the Latin word for a pound and is derived from a British pound sterling, the value of a Troy pound of silver. The lira (plural “lire”) was the official currency of Italy before the country changed over to the euro.

3. 2007 title role for Ellen Page JUNO
“Juno” is a great comedy-drama released in 2007 that tells the story of a spunky teenager who is faced with an unplanned pregnancy. The film won an Oscar for Best Original Screenplay. The relatively low-budget movie earned back its initial budget in the first day of its full release to the public. Low-budget blockbuster; my kind of movie …

7. Noted kneeling NFLer TEBOW
Tim Tebow is a quarterback playing for the Denver Broncos. Tebow was the first college sophomore to win the Heisman Trophy.

14. Largest division of Islam SUNNI
The largest denomination within the Muslim faith is Sunni Islam, with the second largest being Shia Islam.

26. Dealer’s dispenser SHOE
These days, a dealer in a casino usually deals cards from a shoe. The shoe has only been around since 1961 when it was invented by magician John Scarne. The dealing device is so called because early versions resembled a woman’s high-heel shoe.

28. Outlandish Dame EDNA
Dame Edna Everage is the outrageous character created and played by Australian comedian Barry Humphries. I saw him/her perform live in a San Francisco theater, and what a great show it was.

37. Toledo’s lake ERIE
Lake Erie is the fourth largest of the five Great Lakes (Lake Ontario is the smallest). The lake takes its name from the Erie tribe of Native Americans that used to live along its southern shore. Erie is the shallowest of the Great Lakes, something for which nearby residents must be quite grateful. Being relatively shallow, Erie freezes over part way through most winters putting an end to the lake effect snow that falls in the snow belt extending from the lake’s edge.

Toledo, Ohio lies in the northwest of the state, at the western end of Lake Erie. The city was founded as a result of the prosperity that hit the area when the Miami and Erie Canal was constructed in the 19th century to connect Cincinnati to the Great Lakes.

40. Woeful words from Winnie the Pooh OH, BOTHER!
A. A. Milne’s “Winnie-the-Pooh” has been translated into many languages, and is one of the few modern titles for which there is a Latin version. Alexander Lenard had “Winnie ille Pu” published in 1958, and two years later the title made it onto the New York Times Best Seller List, the only book in the Latin language ever to get that honor.

54. Primrose family plant OXLIP
The plant known as the oxlip is more properly called Primula elatior. The oxlip is often confused with its similar-looking cousin, the cowslip.

65. Shih __: Tibetan dog TZU
The Shih Tzu is one of the oldest breeds of dog, and originated in China. Shih Tzus have long hairy coats but they don’t shed.