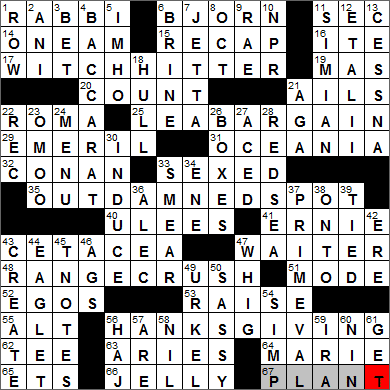 CROSSWORD SETTER: Gareth Bain
THEME: Spotless … today’s themed answers are common phrases with the first letter dropped. The first letters that are dropped are in order S-P-O-T, which is hinted at by “Out, damned spot!”, a quotation from “Macbeth” by William Shakespeare:

17A. One assaulting a sorceress? (S)WITCH HITTER
25A. Great price for a meadow? (P)LEA BARGAIN
48A. Start of a cowboy romance? (O)RANGE CRUSH
56A. Yarn donations? (T)HANKS GIVING

Today’s Wiki-est, Amazonian Googlies
Across
1. Talmud expert RABBI
The Talmud is a collection of writings of thousands of rabbis and is a central text in Rabbinic Judaism, second only to the Torah.

6. ABBA singer Ulvaeus BJORN
I am an unapologetic fan of ABBA’s music. ABBA was of course the Swedish group who topped the charts in the seventies and eighties. The name ABBA is an acronym formed from the first letters of the given names of each of the band members, namely: Agnetha, Benny, Bjorn and Anni-Frid.

11. Dry, in a way SEC
“Sec” is a French term meaning “dry”, and is most familiar on this side of the Atlantic when used to describe wine.

22. Tomato variety ROMA
The Roma tomato isn’t considered to be an heirloom variety, but it is very popular with home gardeners, especially those gardeners that don’t have a lot of space. It is a bush type (as opposed to vine type) and needs very little room to provide a lot of tomatoes.

31. South Pacific region OCEANIA
The part of the Pacific Ocean known as Oceania is roughly equivalent to the tropical islands of the South Pacific. Oceania can be divided into the regions of Polynesia, Melanesia and Micronesia.

32. Barbarian of film CONAN
The character known as Conan the Barbarian first appeared in “Weird Tales” magazine in a fantasy story in 1932.

35. Shakespearean cry that hints at how 17-, 25-, 48- and 56-Across are formed OUT, DAMNED SPOT!
Lady Macbeth is an evil and treacherous woman in William Shakespeare’s “Macbeth”. The most famous line uttered by Lady Macbeth has to be “Out, damned spot! Out, I say!” In this line, Lady Macbeth is frantically rubbing at her hand trying to get rid of an imaginary bloodstain left there after she committed four murders.

40. “__ Gold”: 1997 film ULEE’S
“Ulee’s Gold” is a highly respected film from 1997 in which Peter Fonda plays the title role of Ulee. Ulee’s “gold” is the honey that Ulee produces. It is a favorite role for Peter Fonda and he has shared that playing Ulee brought to mind his father, Henry Fonda, who himself kept a couple of hives. So if you see Peter Fonda in “Ulee’s Gold” you’re witnessing some characteristics that Peter saw in his father.

41. Orange Muppet ERNIE
I’ve always believed that the “Sesame Street” characters Bert and Ernie were named after two roles played in the Christmas classic “It’s a Wonderful Life”. In the movie, the policeman’s name is Bert and his taxi-driving buddy is named Ernie. However, the “Sesame Street” folks have stated that the use of the same names is just a coincidence.

43. Order including whales CETACEA
Cetaceans are mammals that have adapted to life in water. Examples of cetaceans are whales, dolphins and porpoises.

47. Maître d’s subordinate WAITER
The full name of a maitre d’ is “maitre d’hotel”, which means “master of the hotel”.

63. April baby, perhaps ARIES
Aries the Ram is the first astrological sign in the Zodiac, and is named after the constellation. Your birth sign is Aries if you were born between March 21 and April 20, but if you are an Aries you would know that!

65. Roswell crashers, purportedly ETS
The Roswell UFO Incident took place in 1947. Some people believe that an extraterrestrial spacecraft crashed, with aliens aboard. After the initial reports the public accepted the US Military’s explanation of the crash, that the debris recovered belonged to an experimental high-altitude surveillance balloon. The whole incident was dug up again over 30 years later when a claim was made that there was a cover-up in 1947, and that the armed forces had recovered an alien craft and brought it to Roswell Army Air Field. “The National Enquirer” ran the story, and it has been running ever since.

Down
1. Division in the field ROW
I think that the idea is that crops are planted in rows in a field, but I could be wrong again!

2. Wheel spinner’s buy AN I
Contestants have been spinning the “Wheel of Fortune” since it first aired in 1975.

4. Casino game BACCARAT
Baccarat, in all of its three variants, is a relatively simple casino card game. Baccarat is the favored game of chance for James Bond 007, and it looks so cool when he plays it! Banco!

6. What Clementine fell into BRINE
“Oh My Darling, Clementine” is a folk ballad that dates back to the 1880s. The song is about a man who loses his lover, the daughter of a miner who took part in the 1849 California Gold Rush. The words seem to be very sad, but are actually quite tongue-in-cheek.

9. Canadian singer Carly __ Jepsen RAE
Carly Rae Jepsen is a singer/songwriter from Mission, British Columbia. Jepsen got her start on TV’s “Canadian Idol” when she placed third in the show’s fifth season.

10. Largely listener-sponsored org. NPR
National Public Radio (now just called NPR) was launched in 1970 after President Johnson signed into law the Public Broadcasting Act of 1967. The intent of the act was to provide funding for radio and television broadcasting that wasn’t simply driven by profit. As a longtime fan of the state-funded BBC in the UK, I’d have to agree with that intent …

13. Textron-owned plane maker CESSNA
The Cessna Aircraft manufacturing company was founded in 1911 by Clyde Cessna, a farmer from Kansas. Cessna is headquartered in Wichita and today has over 8,000 employees.

18. Body in the lake? HULL
The “body” of a boat might be considered as the hull, and the hull might be sitting in a lake.

21. __ Khan AGA
Aga Khan is a hereditary title of the Imam of a large sect within the Shi’a Muslim faith. The current Aga Khan is Shah Karim al-Hussayni, who has held the position since 1957.

23. Melville opus OMOO
Herman Melville mined his own experiences when writing his novels. Melville sailed from New Bedford, Massachusetts in 1841 on a whaler heading into the Pacific Ocean (a source for “Moby Dick”). Melville ended up deserting his ship 18 months later and lived with natives on a South Pacific Island for three weeks (a source for “Typee”). He picked up another whaler and headed for Hawaii, where he joined the crew of a US navy frigate that was bound for Boston (a source for “Omoo”).

36. Baldwin in Capital One ads ALEC
Alec is the oldest of the acting Baldwin brothers. I think Alec’s big break was playing Tom Clancy’s Jack Ryan in “The Hunt for Red October”, but thank goodness that role was taken over by Harrison Ford for the subsequent Jack Ryan movies. Baldwin made a name for himself in recent times playing Jack Donaghy on “30 Rock”, opposite Tina Fey. He has also hosted the sketch show “Saturday Night Live” on more occasions than anyone else (16 times).

37. Like the forest in Longfellow’s “Evangeline” PRIMEVAL
Something described as “primeval” is very old or ancient, belongs to the earliest ages.

“Evangeline, A Tale of Acadie” is an epic poem by Henry Wadsworth Longfellow, first published in 1847. Nowadays we tend to think first of “Hiawatha” when we see the name Longfellow, but within his own lifetime “Evangeline” was Longfellow’s most famous work. The poem tells the tale of Evangeline Bellefontaine who is separated from her beloved when the Acadians were forcibly removed from their land by the British.

39. Unsettled, in a way TIED
The score is tied, the outcome of the game is not settled.

42. Browning’s “before” ERE
Robert Browning met Elizabeth Barrett in 1845. Elizabeth was a sickly woman, confined to her parents’ house in Wimpole Street in London, largely due to the conservative and protective nature of her father. Robert and Elizabeth eventually eloped in 1846, and lived in self-inflicted exile in Italy. Away from the country of his birth, Browning was moved to write his now famous “Home Thoughts, From Abroad”, the first line of which is “Oh, to be in England …”

44. Aerie nestling EAGLET
An aerie is the nest of an eagle.

45. Govt. securities T-NOTES
A Treasury note (T-Note) is a government debt that matures in 1-10 years. A T-Note has a coupon (interest) payment made every six months. The T-note is purchased at a discount to face value, and at the date of maturity can be redeemed at that face value. A T-Bill is a similar financial vehicle, but it matures in one year or less, and a T-Bond matures in 20-30 years.

47. Fillmore, for one WHIG
The Whig Party (in the US) was active from 1833 to 1856, and was the opposition party to the Democrats. One of the tenets of the Whig Party was the supremacy of Congress over the Executive branch. Prominent members of the party included Presidents Zachary Taylor and John Tyler. Abraham Lincoln was also a Whig while he served a two-year term as US Representative for the state of Illinois. By the time he became President, Lincoln was a member of the Republican Party.

Vice President Millard Fillmore took over the US Presidency when Zachary Taylor died after only 16 months in office. Fillmore was born in the Finger Lakes region of New York State, but grew up around Buffalo. He was one of the founders of the University of Buffalo and served as chancellor there after he left office in 1853.

49. “Family Matters” nerd URKEL
Steve Urkel is a character on the TV show “Family Matters” that aired in the late eighties and nineties. The Urkel character was the archetypal “geek”, played by Jaleel White. Urkel was originally written into the show’s storyline for just one episode, but before long Urkel was the show’s most popular recurring character.

56. Muslim’s journey HAJ
A Haji (also “Hajji”) is the term used for someone who has made a pilgrimage to Mecca, and it is sometimes also used as a form of address for such a person. The journey itself goes by the name “haj” or “hajj”.

59. Michael Collins’s org. IRA
Michael Collins was one of the most famous leaders of the revolutionary war that led to an independent Irish state after the British withdrew. There is an excellent biopic called “Michael Collins” released in 1996 with Liam Neeson in the title role.

60. Noted 20th-century diarist NIN
Anaïs Nin was a French author, famous for her journals that she wrote for over sixty years from the age of 11 right up to her death. Nin also wrote highly regarded erotica and cited D. H. Lawrence as someone from whom she drew inspiration. Nin was married to banker and artist Hugh Parker Guiler in 1923. Decades later in 1955, Nin married former actor Rupert Pole, even though she was still married to Guiler. Nin and Pole had their marriage annulled in 1966, but just for legal reasons, and they continued to live together as husband and wife until Nin passed away in 1977.