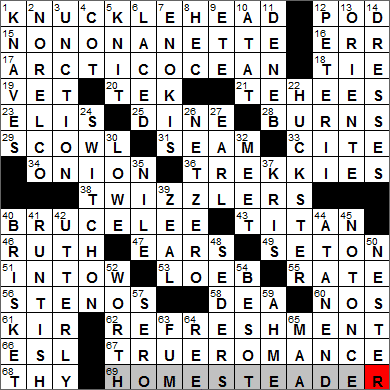 Today’s Wiki-est, Amazonian Googlies
Across
12. Casting leader? POD-
A podcast is basically an audio or video media file that is made available for download. The name comes from the acronym “POD” meaning “playable on demand”, and “cast” from “broadcasting”. So, basically a podcast is a broadcast that one can play on demand, simply by downloading and opening the podcast file.

17. Expanse seen from Point Barrow ARCTIC OCEAN
Point Barrow is a headland on the north coast of Alaska that sits on the Arctic Ocean. Point Barrow, also known as Nuvuk, is the most northerly point in the United States.

20. Shatner’s “__War” TEK
The “Tekwar” series of science-fiction novels was co-authored by Ron Goulart and the actor William Shatner, although it’s only Shatner’s name that appears on the book covers. The stories center around the microchip “drug” called “tek” which dominates the Tekwar universe.

23. Cole Porter and Rudy Vallée, e.g. ELIS
Eli is the nickname for a graduate of Yale University, a term used in honor of the Yale benefactor Elihu Yale.

Cole Porter was a little unusual amongst his peers in that he was one of the few successful songwriters who wrote both lyrics and musics for his compositions. Porter was seriously injured in a riding accident when in his forties and was left disabled and in pain. Despite this, he continued to work and produced his most successful work after the accident.

36. Starfleet uniform wearers TREKKIES
When Gene Roddenberry first proposed the science fiction series that became “Star Trek”, he marketed it as “Wagon Train to the Stars”, a pioneer-style Western in outer space. In fact his idea was to produce something more like “Gulliver’s Travels”, as he intended to write episodes that were adventure stories on one level, but morality tales on another. Personally I think that he best achieved this model with the spin-off series “Star Trek: The Next Generation”. If you watch individual episodes you will see thinly disguised treatments of moral issues such as racism, homosexuality, genocide etc. For my money, “The Next Generation” is the best of the whole franchise …

38. Twerpz and Strawz candy brand TWIZZLERS
Twizzlers candy has been produced since 1845, although back then the only flavor available was licorice. My wife is addicted to strawberry Twizzlers. Can’t stand the stuff myself …

40. Actor honored with a memorial statue in Hong Kong BRUCE LEE
Bruce Lee was born not far from here in San Francisco although he was raised in Hong Kong, returning to the US to attend college. Sadly, Bruce Lee died when he was only 32 years old, due to cerebral edema (a swelling of the brain) attributed to adverse reactions to the pain killing drug Equagesic.

46. Bill’s first Supreme Court appointee RUTH
Associate Justice Ruth Bader Ginsburg serves on the US Supreme Court. Justice Ginsburg was the second woman to join the Court, nominated by President Bill Clinton. She was diagnosed with colon cancer in 1999 and underwent surgery, chemotherapy and radiation therapy. During that time she did not miss one day on the bench. In 2009 Justice Ginsburg had surgery for pancreatic cancer, and was back to work 12 days later.

49. __ Hall SETON
Seton Hall is a private, Roman Catholic college in South Orange, New Jersey. The most famous of their sports programs is men’s basketball, played by the Seton Hall Pirates.

53. 1924 Darrow client LOEB
Nathaniel Leopold and Richard Loeb were two well-heeled students at the University of Chicago who famously murdered a 14-year-old boy, apparently just on a whim, to show that they could commit the perfect crime. The crime turned out to be not quite so perfect and the pair were caught and put on trial for the murder. The trial was big news, especially after the defendants engaged high-profile attorney Clarence Darrow to represent them. In fact, the court proceedings were dubbed “The Trial of the Century”. The crime itself was the inspiration for the 1929 play called “Rope” by Patrick Hamilton, which in turn was the inspiration for the 1948 Hitchcock film of the same name.

56. Pitman users STENOS
Stenography is the process of writing in shorthand. The term comes from the Greek “steno” (narrow) and “graphe” (writing).

58. DOJ part DEA
The Drug Enforcement Administration (DEA) was set up in 1973 while President Nixon was in office.

The Department of Justice (DOJ) came into being in 1870.

61. White wine apéritif KIR
Kir is a French cocktail, made by adding a teaspoon or so of creme de cassis (blackcurrant liqueur) to a glass, and then topping it off with white wine. The drink is named after Felix Kir, the Mayor of Dijon in Burgundy, who used to offer the drink to his guests. My wife (expensive tastes!) is particularly fond of a variant called a Kir Royale, in which the white wine is replaced with champagne.

62. Reason to make a stand? REFRESHMENT
One might make a lemonade stand and serve refreshments.

66. Subj. for an au pair ESL
English as a Second Language (ESL) is sometimes referred to as English for Speakers of Other Languages (ESOL) and English as a Foreign Language (EFL).

Down
2. Razor handle? NORELCO
Norelco is a brand of shavers and personal care products made by Philips. The brand name was introduced as the company was barred from using “Philips” in the US in the early 1940s. The name Norelco was chosen as an acronym for “NOR-th American Philips EL-ectrical CO-mpany.

3. Balm UNCTION
“Unction” is another term for “anointing”.

8. Lawman Ramsey of ’70s TV HEC
“Hec Ramsey” is a TV western starring Richard Boone that aired in the early seventies. The series was unusual in that it was set late in the days of the Old West, and the title character focused less on using a gun, and more on using forensic techniques to catch the bad guys.

9. Haitian season ETE
One might spend the summer (été) under the sun (le soleil) in a French-speaking country.

11. Brightest star in Cygnus DENEB
Deneb is the brightest star in the constellation called Cygnus, the Swan. The name “Deneb” comes from the Arabic word “dhaneb” meaning tail, as it lies at “the tail” of the swan.

12. 18th-century teenage Russian emperor PETER II
Peter II was the son of Peter I and Emperor of Russia. Peter II took over as Emperor on the death of Catherine I, wife of Peter I.

13. Region of eastern Ecuador ORIENTE
The Oriente is that part of Ecuador that is east of the Ecuadorian Andes. Geographically, the Oriente makes up half of the country. That said, only 5% of the country’s population lives in the Oriente.

22. Peddler HUCKSTER
A huckster is an aggressive peddler of goods. The term derives from the Middle Dutch “hokester”, a word for a peddler.

26. Los Angeles-based ISP NETZERO
NetZero was launched in 1998 and was the first free Internet Service Provider. NetZero’s idea was to provide targeted advertising to users, based on what users liked to view online. It’s a little like Google’s business model, providing advertising based on Internet surfing patterns.

An Internet Service Provider (ISP) is just what the name indicates, a company that provides its customers with access to the Internet. One way that ISPs differentiate themselves from each other is in the way in which end users are connected to the ISP’s network. So, there are cable ISPs, DSL ISPs, dial-up ISPs and satellite ISPs. I’d go with cable if I were you, if it’s available in your area …

27. Hall of Fame running back Campbell EARL
Earl Campbell is a retired American football running back from Tyler, Texas. Campbell had the nickname “The Tyler Rose”. He retired in 1985, and has for many years suffered from the injuries he incurred during his playing career, injuries that necessitate the use of a wheelchair.

30. “The West Wing” Emmy nominee LOWE
The actor Rob Lowe is one of the “founding members” of the so-called Brat Pack, having appeared in the movie “St. Elmo’s Fire”. He is currently playing a regular character on the TV show “Parks and Recreation”. My favorite of his roles though, was playing Sam Seaborn on Aaron Sorkin’s great drama series “The West Wing”. When “The West Wing” first aired, Seaborn was billed as the show’s main character, but outstanding performances from the rest of the cast and some great writing meant that Lowe’s role became “one of many”. This led to some dissatisfaction on Lowe’s part, and eventually he quit the show.

37. Songwriter Kristofferson KRIS
The singer Kris Kristofferson was born in Brownsville, Texas and was the son of a USAF Major General. Indeed, Kristofferson’s paternal grandfather was also a military officer, but in the Swedish Army. Kristofferson himself went into the US Army and served in West Germany, achieving the rank of Captain.

40. Common entrée at 48-Down BRISKET
Brisket is a cut of beef from the lower chest of the animal. The brisket muscles contain a large amount of connective tissue, so brisket can be a tough cut and needs to be carefully cooked.

41. Scrawny RUNTISH
Back around 1500. a runt was an old or decayed tree stump, and by the early 1600s “runt” was being used to describe animals that were similarly old and decayed. Ultimately “runt” came to mean the smallest and often sickest in a litter.

48. Rituals including the Cup of Elijah SEDERS
The Passover Seder is a ritual feast that marks the beginning of the Jewish Passover holiday, celebrating the liberation of the Israelites from slavery in Egypt. One of the traditions at the meal is that the youngest child at the table asks “The Four Questions”, all relating to why this night is different from all other nights in the year:

54. Inebriate BESOT
Our word “sot” comes from the Old English “sott”, meaning a fool. The word “sot” started to be associated with alcohol and not just foolery in the late 1500s.

57. Prefix with -tonin SERO-
Most of the body’s serotonin is found in the gut, where it regulates intestinal muscle movement. The balance is manufactured in specialized nerve tissue and has various functions such as regulation of mood, sleep and appetite.

63. Giant word FUM
The line “fee-fi-fo-fum” (with various spellings) comes from the famous English fairy tale “Jack and the Beanstalk”. Within the story, the giant at the top of the beanstalk utters a little poem when he detects the presence of Jack:

One thought on “LA Times Crossword Answers 11 May 13, Saturday”