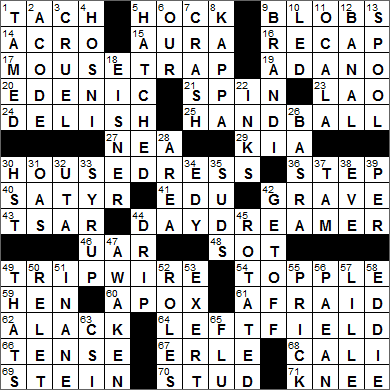 CROSSWORD SETTER: Jerry Edelstein
THEME: Left Field … each of today’s themed answers is in two parts, with the LEFT part (the first word) often seen with the world FIELD:

64A. Figuratively, where some wild ideas come out of; literally, a hint to a word and its position when paired with the starts of the answers to starred clues LEFT FIELD

5. Pawn at a shop HOCK
The term “in hock” is an American invention. Back in the mid-19th century “in hock” meant both “in debt” and “in prison”. The work “hock” came from the Dutch “hok” meaning “jail”.

14. Height: Pref. ACRO-
Our prefix “acro-” comes from the Greek “akros” meaning “at the top”. Examples are “acrophobia” (fear of heights) and “Acropolis” (“city at the top”).

19. Hersey’s bell town ADANO
“A Bell for Adano” is a novel written by John Hersey. Hersey’s story is about an Italian-American US Army officer, Major Joppolo, who found a replacement for a town’s bell stolen by fascists. “A Bell for Adano” was made into a film in 1945, the same year the novel won a Pulitzer.

27. Grant-granting gp. NEA
The National Endowment for the Arts (NEA) is an agency funded by the federal government that offers support and financing for artistic projects. The NEA was created by an Act of Congress in 1965. Between 1965 and 2008, the NEA awarded over $4 billion to the arts, with Congress authorizing around $170 million annually through the eighties and much of the nineties. That funding was cut to less than $100 million in the late nineties due to pressure from conservatives concerned about the use of funds, but it is now back over the $150 million mark. I wonder how long that will last though …

29. Soul automaker KIA
The Kia Soul is a compact car produced in South Korea, although it was designed by Kia here in Irvine, California. Yep, the Kia Soul is from Kia in Seoul …

40. Woodlands man-goat SATYR
The satyrs of Greek mythology came with a very high sex drive. They are the “rude” male subjects drawn on the side of old Greek vases. The nubile maidens known as nymphs were often an object of attention for the satyrs.

43. Old Russian ruler TSAR
The last ruler of Imperial Russia was Tsar Nicholas II (of the House of Romanov). Famously, the Tsar and his family were murdered in 1918 in the basement of a house in Yekaterinburg, Russia by members of the Bolshevik secret police. The Tsar’s youngest daughter was 16-year-old Anastasia and rumors of her escape have persisted for years. The rumors grew with the help of numerous women who claimed to be Anastasia. In 2009, DNA testing finally proved that the remains of all of the Tsar’s immediate family, including Anastasia, have been found and identified.

44. *One given to flights of fancy DAYDREAMER (giving “field day”)
To have a “field day” is to have a great time, a really enjoyable day. The term arose with the military, in which a field day was one spent on maneuvers in the field.

46. Short-lived Egypt-Syr. alliance UAR
The United Arab Republic (UAR) was a union between Egypt and Syria made in 1958 and dissolved in 1961 when Syria pulled out of the arrangement.

48. Drunkard SOT
Our word “sot” comes from the Old English “sott”, meaning a fool. The term “sot” started to be associated with alcohol and not just foolery in the late 1500s.

62. “Alas and __!” ALACK
The archaic interjection “alack!” is an exclamation of sorrow or dismay. It is an abbreviated form of “ah, lack”, with “lack” used in the sense of loss, failure or shame.

67. Mystery writer Gardner ERLE
I must have read all of the Perry Mason books when I was in college. I think they kept me sane when I was facing the pressure of exams. Author Erle Stanley Gardner was himself a lawyer, although he didn’t get into the profession the easy way. Gardner went to law school, but got himself suspended after a month. So, he became a self-taught attorney and opened his own law office in Merced, California. Understandably, he gave up the law once his novels became successful.

68. Colombian city CALI
In terms of population, Cali is the third largest city in Colombia (after Bogotá and Medellin). Santiago de Cali (the full name for the city) lies in western Colombia. Apparently, Cali is a destination for “medical tourists”. The city’s surgeons have a reputation for being expert in cosmetic surgery and so folks head there looking for a “cheap” nose job.

69. Beer holder STEIN
A stein is a type of beer glass. The term is German in origin, and is short for “Steinkrug” meaning “stone jug”. “Stein” is the German for “stone”.

Down
4. Mubarak of Egypt HOSNI
Hosni Mubarak was the fourth President of Egypt, taking over after Anwar Sadat was assassinated in 1981. Mubarak resigned in 2011 in the early months of the Arab Spring after 18 days of public demonstrations. He was sentenced to life imprisonment in 2012, although this was overturned. Mubarak has been in detention ever while facing new charges.

6. “Days of __ Lives” OUR
NBC’s “Days of Our Lives” is the second-longest running soap opera on US television, second only to “General Hospital”. “Days …” has been aired since November 1965.

8. Letter after iota KAPPA
Kappa is the 10th letter of the Greek alphabet, the equivalent of our letter K.

9. Chastain of women’s soccer BRANDI
Brandi Chastain is professional soccer player and former member of the US national team. Famously, Chastain scored the game-winning kick in a penalty shootout in the 1999 Women’s World Cup final. Male soccer players regularly whip off their jerseys in celebration of a goal, and Chastain did the same thing. The sports bra seen around the world, as it were …

11. City NW of Orlando OCALA
The city of Ocala, Florida was founded near a historic village with the same name. In the local Timucua language “Ocala” means “Big Hammock”. Back in the 1890s, Ocala was famous for its oranges, with over one third of that fruit shipped from Florida coming from the city. Also, thoroughbred horse farming in Florida started in Ocala, back in 1943. Some folks today call Ocala the “Horse Capital of the World”, but I bet that’s disputed by others …

18. Ex-Disney CEO Michael EISNER
Michael Eisner took over as CEO of the Walt Disney Company in 1984. Eisner has been attributed with turning Disney around, as the company was floundering really since 1966 when Walt Disney died. Eisner had a good run, but ran foul of Walt Disney’s nephew Roy Disney who led a revolt that resulted in Eisner’s resignation in 2005.

26. Iraqi port BASRA
It’s quite a coincidence that the Iraqi city of Basra has a name that is an anagram of “Arabs”, isn’t it? Basra also features in the H. G. Wells science-fiction tale “The Shape of Things to Come”. Written in 1933, the storyline predicts a global conflict (WWII) that breaks out in 1940 lasting for ten years, after which chaos reigns as no victor emerges. Following worldwide plague, a benevolent dictatorship takes charge and the world moves towards a serene utopia. In time, the dictators are overthrown and peacefully retired, and the people of the Earth live happily ever after, all citizens of one global state with its capital in Basra in the Middle East.

30. FDR’s last vice president HST
The initial “S” in the middle of the name Harry S. Truman doesn’t stand for anything. The future-president was named “Harry” in honor of his mother’s brother Harrison “Harry” Young. The initial “S” was chosen in honor of young Harry’s two grandfathers: Anderson S-hipp Truman and S-olomon Young.

31. Western defense gp. OAS
The Organization of American States (OAS) has its headquarters in Washington, D.C. All the independent states in the Americas are members of the group except Honduras, which had its membership suspended after the country’s 2009 coup.

32. Actress Hagen UTA
Uta Hagen was a German-born American actress. Hagen married Jose Ferrer in 1938, but they were divorced ten years later after it was revealed that she was having a long-running affair with Paul Robeson. Her association with Robeson, a prominent civil rights activist, earned her a spot on the Hollywood Blacklist during the McCarthy Era. This forced her away from film, but towards a successful stage career in New York City.

34. Ice cream maker Joseph EDY
Dreyers’ ice cream sells its products under the name Dreyers in the Western United States, and Edy’s in the Eastern states. The company’s founders were William Dryer and Joseph Edy.

37. Bagpiper’s topper TAM
A tam o’shanter is a man’s cap traditionally worn by Scotsmen. “Tams” were originally all blue (and called “blue bonnets”), but as more dyes became readily available they became more colorful. The name of the cap comes from the title character of Robert Burns’ poem “Tam O’Shanter”.

49. “__ Life”: Sinatra hit THAT’S
“That’s Life” is a song recorded by Frank Sinatra in 1966, and the title of the album on which it was included. Written by Dean Kay and Kelly Gordon, the song was first recorded by Marion Montgomery in 1966.

52. Romeo and Juliet, e.g. ROLES
William Shakespeare’s “Romeo and Juliet” is all about the love between the two title characters, which is forbidden as the pair come from two families who are sworn enemies. Early in the play, Romeo (a Montague) sneaks into a masquerade ball being held by the Capulets in the hope of meeting a Capulet girl named Rosaline. Instead, he meets and falls for Juliet, also a Capulet. Tragedy ensues …

‘Tis but thy name that is my enemy.
Thou art thyself, though not a Montague.
What’s Montague? It is nor hand, nor foot,
Nor arm, nor face, nor any other part
Belonging to a man. O, be some other name!
What’s in a name? That which we call a rose
By any other word would smell as sweet.

56. Song of praise PAEAN
A paean is a poem or song that expresses triumph or thanksgiving. “Paean” comes from the ancient Greek “paian” meaning “song of triumph”.

57. City in northern France LILLE
Lille is a large city in the very north of France sitting right on the border with Belgium. The name “Lille” is a derivation of the term “l’isle” meaning “the island”.

58. Comic Izzard EDDIE
Eddie Izzard is a remarkable British stand-up comedian and actor. Famously, Izzard is a transvestite and used to perform stand-up in women’s clothing and makeup, although he tends to perform in “boy-mode” these days. In 2009, Izzard decided to run back-to-back marathons to raise money for charity, despite having no real history of running. He trained for five weeks, and then ran the equivalent of an incredible 43 marathons in 51 days, covering more than 1,100 miles all over the UK and raising over $300,000.