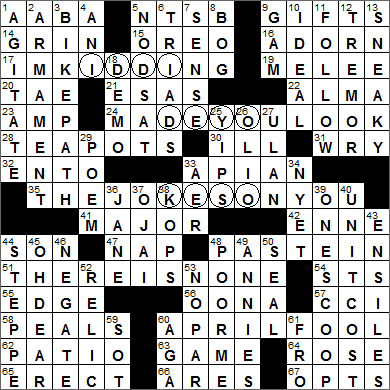 CROSSWORD SETTER: Daniel Nierenberg
THEME: Gotcha! … each of today’s themed answers contains four letters that have been circled in the grid, as if they are hidden words. But the joke’s on us this April Fools’ Day. We can look for a hidden word, but THERE IS NONE!

51A. Significance of this puzzle’s circled letters (gotcha again!) THERE IS NONE!
60A. Today’s “Gotcha!” APRIL FOOL!

Whose woods these are I think I know.
His house is in the village though;
He will not see me stopping here
To watch his woods fill up with snow.

My little horse must think it queer
To stop without a farmhouse near
Between the woods and frozen lake
The darkest evening of the year.

He gives his harness bells a shake
To ask if there is some mistake.
The only other sound’s the sweep
Of easy wind and downy flake.

5. Govt. org. with a “Safety Compass” blog NTSB
The National Transportation Safety Board is responsible for the investigation of major accidents involving transportation. Included in this broad definition is the transportation of fluids in pipelines. The organization is independent in that it has no ties to other government agencies or departments so that its investigations can be viewed as “impartial”. The NTSB also earns a little money for the US as it hires out its investigation teams to countries who don’t have the necessary resources available on their own soil.

The NTSB’s “Safety Compass” is a blog authored and maintained by employees of the agency. Those posting write about the transportation safety issues that they encounter on a daily basis.

9. Under-the-tree pile GIFTS
The custom of decorating trees at Christmas seems to have originated in Renaissance Germany. Those first trees were placed in guildhalls and were decorated with sweets and candy for the apprentices and children. After the Protestant Reformation, the Christmas tree became an alternative in Protestant homes for the Roman Catholic Christmas cribs. The Christmas tree tradition was imported into Britain by the royal family because of its German heritage. That tradition spread from Britain into North America.

15. Snack with a white center OREO
How the Oreo cookie came to get its name seems to have been lost in the mists of time. One theory is that it comes from the French “or” meaning “gold”, a reference to the gold color of the original packing. Another suggestion is that the name is the Greek word “oreo” meaning “beautiful, nice, well-done”.

19. Brawl MELEE
Our word “melee” comes from the French “mêlée”, and in both languages the word means “confused fight”.

20. Menlo Park initials TAE
Thomas Alva Edison (TAE) was nicknamed “The Wizard of Menlo Park” by a newspaper reporter, a name that stuck. He was indeed a wizard, in the sense that he was such a prolific inventor. The Menlo Park part of the moniker recognizes the location of his first research lab, in Menlo Park, New Jersey.

21. Those, in Oaxaca ESAS
Oaxaca (officially “Oaxaca de Juárez”) is the capital city of the Mexican state of Oaxaca, located in the south of the country.

22. __ mater ALMA
The literal translation for the Latin term “alma mater” is “nourishing mother”. “Alma mater” was used in Ancient Rome to refer to mother goddesses, and in Medieval Christianity the term was used to refer to the Virgin Mary. Nowadays, one’s alma mater is the school one attended, either high school or college, usually one’s last place of education.

23. Gear on a tour bus AMP
An electric guitar, for example, needs an amplifier (amp) to take the weak signal created by the vibration of the strings and turn it into a signal powerful enough for a loudspeaker.

33. Hive-dwelling APIAN
Something described as “apian” is related to bees. “Apis” is the Latin for “bee”.

44. Icarus, to Daedalus SON
Daedalus was a master craftsman of Greek mythology who was tasked with creating the Labyrinth on the island of Crete that was to house the Minotaur. After the Labyrinth was completed, King Minos imprisoned Daedalus and his son Icarus in a tower, so that he could not spread word of his work. Daedalus fabricated wings so that he and Icarus could escape by flying off the island. Despite being warned by his father, Icarus flew too close to the sun so that the wax holding the wings’ feathers in place melted. Icarus drowned in the sea, and Daedalus escaped.

56. Charlie’s fourth wife OONA
Oona O’Neill dated J. D. Salinger and Orson Welles in her teens, but ended up marrying Charlie Chaplin. Oona was still pretty young when she married Chaplin, much to the dismay of her famous father, the playwright Eugene O’Neill. After the marriage Eugene disowned Oona as he was pretty upset about 54-year-old Chaplin marrying his 18-year-old daughter.

58. Carillon sounds PEALS
A carillon is musical instrument usually found in a belfry. It is a collection of bells that is connected to a keyboard.

60. Today’s “Gotcha!” APRIL FOOL!
April Fool’s Day is celebrated on April 1st in the western world. In the US (and Ireland) one can make practical jokes all day long if one wants. But in the UK there is a noon deadline. Anyone pranking after midday is called an “April Fool”.

William Faulkner was a writer from Oxford, Mississippi. Faulkner had been publishing works for thirty years and was largely unknown before he received the Nobel Prize for Literature in 1949. He came to despise the fame that came with the award. Even his 17-year-old daughter wasn’t told about his winning of the Nobel Prize, and she had to learn about it at school.

66. “Iliad” deity ARES
The Greek god Ares is often referred to as the Olympian god of warfare, but originally he was regarded as the god of blood-lust and slaughter. Ares united with Aphrodite to create several gods, including Phobos, Deimos and Eros. The Roman equivalent to Ares was Mars.

“Iliad” is an epic poem by the Greek poet Homer, which tells the story of the siege of Ilium (also known as Troy) during the Trojan war.

Down
4. DiFranco of folk rock ANI
Ani DiFranco is a folk-rock singer and songwriter. DiFranco has also been labeled a “feminist icon”, and in 2006 won the “Woman of Courage Award” from National Organization of Women.

6. Three-note chords TRIADS
A triad is a group of three, and specifically in music is a chord made up of three notes.

8. Peat source BOG
When dead plant matter accumulates in marshy areas, it may not fully decay due to a lack of oxygen or acidic conditions. We are familiar with this in Ireland, because this decaying matter can form peat, and we have lots and lots of peat bogs.

9. Leg, to a film noir detective GAM
The American slang term “gams” is used for a woman’s legs. The term goes back to the 18th century “gamb” meaning the leg of an animal on a coat of arms.

27. __ Bator ULAN
The name “Ulan Bator” translates from Mongolian as “the Red Hero”, and is Mongolia’s capital city. The “Red Hero” name was chosen in honor of the country’s national hero, Damdin Sükhbaatar. Sükhbaatar fought alongside the Soviet Red Army in the fight for liberation from Chinese occupation.

29. Mary Oliver output POEM
Mary Oliver is a writer, mainly of petry, who has been described as America’s best-selling poet. Oliver won a Pulitzer for poetry in 1984 for her collection of poems called “American Primitive”.

33. __ Lingus AER
Aer Lingus is my favorite airline! Well, the service isn’t that great, but when I get on board an Aer Lingus plane I feel like I am back in Ireland. Aer Lingus is the national airline of Ireland, with “Aer Lingus” being a phonetic spelling of the Irish “aer-loingeas” meaning “air fleet”. These days Aer Lingus can only lay claim to the title of Ireland’s oldest airline as it is no longer the biggest. That honor goes to the controversial budget airline called Ryanair.

34. Babushka’s denial NYET
As well as being the name of a type of headscarf, in Russia a babushka is a grandmother or nana. Babushka is a diminutive of “baba” meaning “old woman”.

36. Actress Kaczmarek with seven Emmy nominations JANE
The actress Jane Kaczmarek is best known for playing Lois, the mother on the TV show “Malcolm in the Middle”. Kaczmarek was married to actor Bradley Whitford (who played Josh Lyman on “The West Wing”) from 1992 to 2009.

37. Ventura County resort city OJAI
The city of Ojai, California is located just northwest of Los Angeles. One of the city’s claims to fame is that according to the TV shows “The Bionic Woman” and “The Six Million Dollar Man”, Jaime Sommers and Steve Austin grew up in Ojai and were childhood sweethearts!

38. Keystone force KOPS
The Keystone Cops (sometimes “Keystone Kops”) were a band of madcap policemen characters who appeared in silent movies. A 1914 short film called “A Thief Catcher” that was believed lost was rediscovered in 2010. “A Thief Catcher” featured the magnificent Charlie Chaplin in an early role as a Keystone Cop.

43. Stores in a farm tower ENSILES
“To ensile” is to store in a silo.

Silo is a Spanish word that we absorbed into English, originally coming from the Greek word “siros” that described a pit in which one kept grain.

44. Vast grassland STEPPE
A steppe is a grassland, devoid of trees apart from those growing near rivers and lakes. We would likely call such a geographic feature a prairie in this country.

49. John Denver’s “__ Song” ANNIE’S
John Denver wrote “Annie’s Song” in just over ten minutes, as he was travelling up a ski lift in Aspen, Colorado. The song is a tribute to his then wife Annie Martell Denver.

Singer John Denver’s real name was Henry John Deutchendorf, Jr. Denver was a great singer and he had many other passions. He was an excellent photographer, and an avid skier and golfer. He also loved flying and collected vintage biplanes. He flew himself to concerts in his own Learjet and had a handful of other planes that he would take out for spin when he could. One of his planes was an Experimental Rutan Long-EZ, a homebuilt aircraft noted for its fuel efficiency and tremendous range. Denver took the Rutan Long-EZ up in the middle of October 1997 not having much experience with the plane, even though he had logged over 2,700 hours of flying time in other aircraft. The plane crashed into the ocean near Pacific Grove, California in an accident that Denver did not survive.

53. Wall Street phrase NO-PAR
In days gone by, when companies first issued a stock, each share would be given a face value (called “par value”). In effect, the company was making a commitment not to issue any more stock under that par value, giving investors confidence that there was no better deal to be had. Nowadays, most stock is issued without such a “guarantee” and is called “no-par stock”.

59. Pink-elephant spotter, stereotypically SOT
The first documented use of the phrase “seeing pink elephants”, a euphemism for being drunk, is by Jack London in his autobiographical novel “John Barleycorn”. In London’s description, drinkers not only see pink elephants, but also blue mice.

60. Ottoman bigwig AGA
“Aga” (also “agha”) is a title that was used by both civil and military officials in the Ottoman Empire.