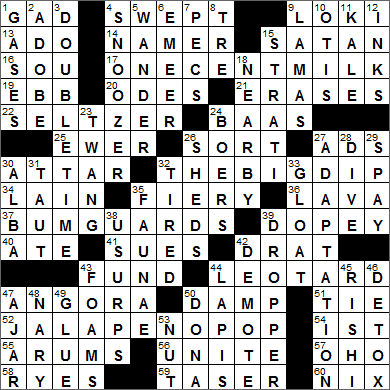 CROSSWORD SETTER: Peg Slay
THEME: Dropper … each of today’s themed answers is a common phrase, but we have are instructed to “DROP PER”. So the letter-string PER is DROPPED from that phrase to give the answer to the clue:

39D. Medicine dispenser, and, in another way, a hint to the answers to starred clues DROPPER (and “DROP PER”)

17A. *Bargain dairy product? ONE-CENT MILK (from “one-percent milk”)
32A. *Nickname for a roller coaster highlight? THE BIG DIP (from “the Big Dipper”)
37A. *Security workers asleep on the job? BUM GUARDS (from “bumper guards”)
52A. *Really hot cold drink? JALAPENO POP (from “jalapeño popper”)

Today’s Wiki-est, Amazonian Googlies
Across
1. Roam GAD
“To gad about” is to move around with little purpose. The word “gad” comes from the Middle English “gadden” meaning “to hurry”.

9. Norse shape-shifter LOKI
Loki is a god appearing in Norse mythology. He is a “shape shifter”, a being who can appear in different forms. In one story about Loki, he was punished by other gods for having caused the death of Baldr, the god of light and beauty. Loki is bound to a sharp rock using the entrails of one of his sons. A serpent drips venom which is collected in a bowl, and then his wife must empty the venom onto Loki when the bowl is full. The venom causes Loki great pain, and his writhing results in what we poor mortals experience as earthquakes.

15. The Tempter SATAN
Satan is the bringer of evil and temptation in the Abrahamic religions. The name “Satan” is Hebrew for “adversary”.

16. Trivial amount SOU
A sou is an old French coin. We use the term “sou” to mean “an almost worthless amount”.

22. Bar supply SELTZER
The term “seltzer” comes from the village of Selters in Germany. Selters has natural springs of carbonated mineral water that is bottled and sold as Selters water. In English-speaking countries, the name has morphed into “Seltzer” water.

30. __ of roses ATTAR
Attar is a fragrant essential oil obtained from flowers, and the term may particularly refer to attar of roses.

32. *Nickname for a roller coaster highlight? THE BIG DIP (from “the Big Dipper”)
The constellation called Ursa Major (Latin for “Larger Bear”) is often just called the Big Dipper because of its resemblance to a ladle or dipper. Ursa Major also resembles a plow, and that’s what we usually call the same constellation back in Ireland: the “plough”.

36. Soap containing ground pumice LAVA
Lava is a brand of soap that was introduced as a heavy-duty cleanser in 1983. Unlike like soaps that are marketed using a “soft” image, Lava touts the inclusion of ground pumice that is intended to abrade grime off the skin. Pumice is found in certain types of lava ejected from a volcano, hence the name of the soap.

37. *Security workers asleep on the job? BUM GUARDS (from “bumper guards”)
Bumper guards are vertically mounted crosspieces that are commonly mounted on emergency vehicles. The guards prevent the locking of bumpers when pushing another vehicle.

39. Only Dwarf without a beard DOPEY
In the original Brothers Grimm fairy tale called “Snow White”, the seven dwarfs were not given any names. The names were added for the 1937 classic Disney film “Snow White and the Seven Dwarfs”. The seven dwarfs are:

42. Oath for toondom’s Dick Dastardly DRAT!
Dick Dastardly is a marvelous cartoon villain the Hanna-Barbera universe. Dastardly first appeared in the animated series “Wacky Races”, and later in “Dastardly and Muttley in Their Flying Machines”. The Dastardly character was inspired by Professor Fate in the 1965 movie “The Great Race”, played by Jack Lemmon. Dastardly’s personality and mannerisms are modelled after the magnificent English comic actor Terry-Thomas.

47. Turkish tabby ANGORA
The Turkish Angora is a breed of domestic cat that is often called simply an Angora or Ankara cat. The Angora is particularly prized for its white coat, although the breed can come in a variety of colors.

52. *Really hot cold drink? JALAPENO POP (from “jalapeño popper”)
Jalapeño poppers are jalapeño peppers that have been stuffed with cheese and spices, and then breaded and deep fried.

55. Cuckoopints, e.g. ARUMS
The woodland plant Arum maculatum has a number of common names including “lords-and-ladies” and “cuckoo-pint”. These gender-related names are a reference to the shape of the plant’s flower, which resemble male and female genitalia.

58. Bar offerings RYES
For whiskey to be labelled as “rye” in the US, it has to be distilled from at least 51% rye grain. In Canada however, a drink called rye whiskey sometimes contains no rye at all.

60. Reject NIX
The use of “nix” as a verb, meaning “to shoot down”, dates back to the early 1900s. Before that “nix” was just a noun meaning “nothing”. “Nix” comes from the German “nichts”, which also means “nothing”.

Down
1. They may be noble GASES
The rare gases are better known as the noble gases, but neither term is really very accurate. Noble gas might be a better choice though, as they are all relatively nonreactive. But rare they are not. Argon, for example, is a major constituent (1%) of the air that we breathe.

2. __ Reader ADOBE
Adobe Acrobat is the software used to create .pdf files. Most of us are more familiar with the associated application called Adobe Reader, because that’s what we use to read those .pdf files.

4. Loser-to-be? SNOOZER
You snooze, you lose.

6. Arab potentate EMEER
In English, emir can also be written as emeer, amir and ameer (watch out for those spellings in crosswords!).

7. Muscle mag display PECS
“Pecs” is the familiar term for the chest muscle, more correctly known as the pectoralis major muscle. “Pectus” is a the Latin word for “breast, chest”.

8. Green Day drummer __ Cool TRE
Green Day is a punk rock band from just down the road here, from Berkeley, California. The name “Green Day” was chosen by the band to reflect their fondness for marijuana. “Green day” is a slang term used to describe a day spent smoking the drug.

9. Lorenzo of “Renegade” LAMAS
Lorenzo Lamas is an actor from Santa Monica, California who is best known perhaps for playing the character Hector Ramirez on the soap opera “The Bold and the Beautiful”. He also played the lead in a nineties adventure drama called “Renegade”, which is about a police officer on the run after being framed for a murder.

10. Man with rising aspirations? OTIS
Elevators (simple hoists) have been around for a long time. What Elisha Otis did was come up with the “safety elevator”, a design that he showcased at the 1853 World’s Fair in New York. At the Fair, Otis would stand on an elevated platform in front of onlookers and order his assistant to cut the single rope holding up the platform. His safety system kicked in when the platform had only fallen a few inches, amazing the crowd. After this demonstration, the orders came rolling in.

15. Layered clouds STRATI
Stratus clouds (plural “strati”) are very common, and as they are wider than they are tall and flat along the bottom, we might just see them as haze in a featureless sky above us. Stratus clouds are basically the same as fog, but above the ground. Indeed, many stratus clouds are formed when morning fog lifts into the air as the ground heats up.

23. Bluegrass characteristic TWANG
Bluegrass is a sub-genre of country music, and has its roots in the traditional music brought over from the British Isles, particularly from Ireland and Scotland. The style of music really evolved quite recently, just before WWII. Musician Bill Monroe is referred to as its “founding father”, and indeed bluegrass takes its name from Monroe’s band, the Blue Grass Boys.

24. Transvaal settlers BOERS
“Boer” is the Dutch and Afrikaans word for “farmer”, a word that was used to describe the Dutch-speaking people who settled parts of South Africa during the 1700s.

27. 2002 Cage/Streep film ADAPTATION
The 2002 movie “Adaptation” is described as a “metafilm”, meaning that the film is a story about its own production. “Adaptation” stars Nicolas Cage as screenwriter Charlie Kaufman who is struggling to adapt Susan Orlean’s book “The Orchid Thief” into a movie. This one was received very well by the critics, so I am putting it on my list of films to see one day …

28. Honky-tonk DIVE
A honky-tonk is a bar with musical entertainment, usually country music. The etymology of the term “honky-tonk” seems unclear. The term has evolved to mean any cheap, noisy bar or dance hall.

29. Fix, in a way SPAY
Our verb “to spay”, meaning “to surgically remove the ovaries of” (an animal) comes from an old Anglo-French word “espeier” meaning “to cut with a sword”.

30. Goya’s “The Duchess of __” ALBA
María Cayetana de Silva was the 13th duchess of Alba. She was a favorite subject of the Spanish painter Francisco Goya. The duchess is the subject in the famous portrait known as “The Naked Maja”, as well as “The Clothed Maja”. Goya also painted her in a 1797 work called “Mourning Portrait of the Duchess of Alba”, in which the 35-year-old lady is dressed in mourning attire following the death of her husband.

38. Seizes unlawfully USURPS
“To usurp” is to seize and hold by force, say the power or authority of a ruler. The term “usurp” comes to us from Latin via French, from “usus” (a use) and “rapere” (to seize).

44. Blue gem, briefly LAPIS
Lapis lazuli is a blue, semi-precious stone mined mainly in Afghanistan. Lapis Lazuli is Latin for “stone of Lazhward”, referring to the Persian name for the location where the stone was mined. Our word “azure”, a shade of blue, has the same root.

47. Open a touch AJAR
Our word “ajar” is thought to come from Scottish dialect, in which “a char” means “slightly open”.

49. Kindergarten staple GLUE
“Kindergarten” is a German term, literally meaning “children’s garden”. The term was coined by the German education authority Friedrich Fröbel in 1837, when he used it as the name for his play and activity institute that he created for young children to use before they headed off to school. His thought was that children should be nourished educationally, like plants in a garden.

50. Spanish lady DONA
In Spain, a title of respect for men is “Don”. The equivalent female title is “Dona”.