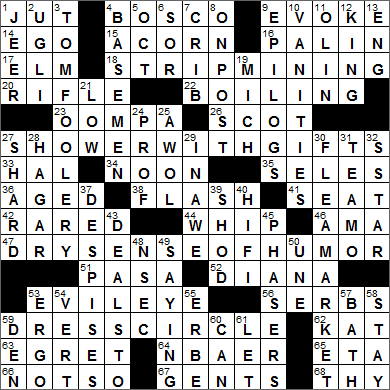 CROSSWORD SETTER: John Lampkin
THEME: Bathroom Sequence … we get a sequence of activities, commonly performed in a BATHROOM, by using the first word in each themed answer:

16. “America by Heart” author Sarah PALIN
“America by Heart: Reflections on Family, Faith and Flag” is the second book by Sarah Palin, released in 2010 following the success of “Going Rogue: An American Life” that was published the prior year.

17. Good name for a tree-lined street ELM
The most common street name in the US is “Second Street”. “First Street” comes in only at number three, and this is because many cities and towns forego the use of “First” and instead go with “Main” or something more historical in nature. “Elm Street” appears on the list at number fifteen.

18. Controversial coal-extraction process STRIP MINING
Strip mining is a process used to mine minerals that are relatively close to the surface. A long strip of overlying soil and rock is first removed, and then the ore beneath is excavated. Once each long strip has been excavated then the overlying soil and rock is redeposited. Strip mining wouldn’t be most environmentally friendly practice …

23. __-Loompa: fictional chocolate factory worker OOMPA
The Oompa-Loompas are characters in the Roald Dahl book “Charlie and the Chocolate Factory”, and indeed in the sequel story “Charlie and the Great Glass Elevator”. Willy Wonka came across the Oompa-Loompas on an isolated island in the Atlantic and invited them to work in his factory in order to escape those hunting them on the island. Right before Dahl’s book was first published, he was intending to call the Oompa-Loompas the “Whipple-Scrumpets”.

33. “2001” computer HAL
In Arthur C. Clarke’s “Space Odyssey” (famously adapted for the big screen as “2001: A Space Odyssey”) the computer system that went rogue was called HAL 9000, or simply “HAL”. HAL stands for Heuristically programmed ALgorithmic computer. Even though, Clarke denied it, there’s a good argument that can be made that the acronym HAL is a veiled reference to IBM, the big player in the world of computing at the time of the novel’s publication (1968). The acronym HAL is just a one-letter shift from the initials “IBM”.

35. Monica of tennis SELES
Monica Seles has a Hungarian name as she was born to Hungarian parents in former Yugoslavia. Seles was the World No. 1 professional tennis player in 1991 and 1992 before being forced from the sport when she was stabbed by a spectator at a match in 1993. She did return to the game two years later, but never achieved the same level of success.

36. Allowed to ripen, as cheddar AGED
Cheddar cheese takes its name from the English village of Cheddar in Somerset. Over 50% of the cheese sold in the UK is cheddar. Here in the US cheddar is the second most popular cheese sold, behind Mozzarella.

42. Rose (up) on hind legs, to a cowhand RARED
Horses “rear up” on their hind legs. I think that the term “rare up” is used as well, for the same meaning, but I think that it might be slang.

56. Some Balkanites SERBS
Serbs are an ethnic group native to the Balkans in southeastern Europe. Although Serbs exist as a minority group in many countries in the region, they are the majority ethnic group in Serbia, in Montenegro and in Bosnia and Herzegovina.

59. Opera house section DRESS CIRCLE
I believe that the original dress circle in a theater was the curved section of seating at the front of the first gallery above the ground-floor seats. The seats in the dress circle were reserved for members of the audience in evening dress, hence the name. I always seem to get directed to the Jeans and Dishevelled Shirt Circle …

62. Kit __: candy bar KAT
I grew up eating Kit Kat bars as a kid, as the chocolate confection has been around since the thirties. Kit Kats didn’t hit the shelves in the US until the seventies. I’ve seen new varieties of Kit Kat over in the UK, such as an orange-flavored version, but haven’t seen anything like that over here.

63. Everglades wader EGRET
The Everglades are a tropical wetlands that cover much of southern Florida. The area was named “River Glades” by a British surveyor in 1773, and is suggested that poor transcription of the word “river” led to the use of “ever”. The southern 20% of the Everglades is a protected region that we know as Everglades National Park. The park is the third largest National Park in the lower 48 states, after Death Valley NP (the largest) and Yellowstone NP.

65. H-like letter ETA
Eta is the seventh letter of the Greek alphabet, and is a forerunner of our Latin character “H”. Originally denoting a consonant, eta was used as a long vowel in Ancient Greek.

68. “Give __ thoughts no tongue”: “Hamlet” THY
In William Shakespeare’s play “Hamlet”, Polonius gives some fatherly advice to his son Laertes before the young man heads off to France. Included among the numerous pearls of wisdom is the oft-quoted “Neither a borrower nor a lender be”.

Give thy thoughts no tongue,
Nor any unproportioned thought his act.
Be thou familiar but by no means vulgar.
Those friends thou hast, and their adoption tried,
Grapple them unto thy soul with hoops of steel,
But do not dull thy palm with entertainment
Of each new-hatched, unfledged comrade. Beware
Of entrance to a quarrel, but being in,
Bear ’t that th’ opposèd may beware of thee.
Give every man thy ear but few thy voice.
Take each man’s censure but reserve thy judgment.
Costly thy habit as thy purse can buy,
But not expressed in fancy—rich, not gaudy,
For the apparel oft proclaims the man,
And they in France of the best rank and station
Are of a most select and generous chief in that.
Neither a borrower nor a lender be,
For loan oft loses both itself and friend,
And borrowing dulls the edge of husbandry.
This above all: to thine own self be true,
And it must follow, as the night the day,
Thou canst not then be false to any man.

Down
1. Bit of heckling JEER
The original use of the verb “to heckle” was to mean questioning severely, and for many years was associated with the public questioning of parliamentary candidates in Scotland. In more recent times, the meaning has evolved into questioning that is less polite and that is directed at standup comics.

2. Aptly named fruit UGLI
The ugli fruit is a hybrid of an orange and a tangerine, first discovered growing wild in Jamaica where most ugli fruit comes from today.

3. Horseplay TOMFOOLERY
In Middle English, in the middle of the 14th century, a mentally deficient man would be called a Thom Foole, sort of a nickname. We retain the name today in our word “tomfoolery” meaning “clowning around”.

5. Autumn mo. OCT
Looking back a thousand years or so, it was common for people to think of just two seasons: summer and winter. The concept of four seasons really only gained popularity in the 1600s. The terms “summer” and “winter” have persisted for many centuries, whereas the seasons we now call “spring” and “fall” have had varying names. Spring replaced “Lent” and “prime-temps”, and “fall” replaced “harvest” and “autumn”. The use of “spring” and “fall” comes from the notion of leaves “springing into existence” and “falling to the ground”.

9. Literary postscripts EPILOGS
Our word “epilog”, meaning an addition at the end of a play or other literary work, ultimately comes from Greek. “Epi-” is a prefix signifying “in addition”, and “logos” is the noun for “a speech”.

11. “Chocolat” actress Lena OLIN
The lovely Lena Olin is a Swedish actress, clearly someone who had acting in her blood. Her mother was the actress Britta Holmberg and her father the actor and director Stig Olin. Olin had a very successful career in Sweden, often working with the great Ingmar Bergman. Olin’s breakthrough international and English-speaking role was playing opposite Daniel Day-Lewis in “The Unbearable Lightness of Being” released in 1988. Way back in 1974, the lovely Miss Olin was crowned Miss Scandinavia in a beauty pageant for Nordic women held in Helsinki, Finland.

The movie “Chocolat” released in 2000 is a big screen adaption of the novel of the same name by Joanne Harris. “Chocolat” tells the story of a young mother with a six-year-old daughter who opens up a chocolate shop in a French village. The mother is played by the talented Juliette Binoche.

12. Royal flush card KING
The poker hand called a royal flush is the highest-ranking hand possible. It consists of a run of 10, Jack, Queen, King and Ace, with all in the same suit.

25. AFB truant AWOL
An airman might go absent without leave (AWOL) from an Air Force base (AFB).

“Truant” is such a lovely word. We have been using it to describe someone who wanders from an appointed place since the mid-1400s. Prior to that a truant was a beggar or a vagabond.

28. Helga’s Viking husband, in comics HAGAR
“Hagar the Horrible” is a comic strip that was created by the late Dik Browne and is now drawn by his son, Chris Browne. “Hagar the Terrible” (not “Horrible”) was the nickname given to Dik by his sons.

40. Old audio system HI-FI
Hi-fi systems were introduced in the late forties, and is audio equipment designed to give a much higher quality reproduction of sound than cheaper systems available up to that point. “Hi-fi” stands for “high fidelity”.

45. Sci-fi weapons PHASERS
A MASER is a device that was around long before LASERs came into the public consciousness. A MASER (Microwave Amplification by Stimulated Emission of Radiation) is similar to a LASER, but microwaves are emitted rather than light waves. When the storyline for “Star Trek” was being developed, the writers introduced a weapon called a “phaser”, with the name “phaser” derived from PHoton mASER.

48. Tiny fraction of a min. NSEC
“Nanosecond” is more correctly abbreviated to “ns”, and really is a tiny amount of time: one billionth of a second.